All The Faults in Our Scarves

At what point in your weaving career do you stop making errors? Read on about a few that I just made.

Sometimes I’m fairly well convinced that I produce acceptable weaving projects in spite of myself. Exactly how long do you have to weave before you stop making the same mistakes and or adding to your mistake repertoire? In my case, that magic moment will happen after more than 25 years of weaving because it hasn’t happened yet. Here’s what happened in this one fairly simple rigid-heddle scarf project.

• When I finished weaving my scarf on Sunday morning and took it off the loom, I realized that I had forgotten to weave in a couple picks of scrap yarn in the beginning. I had woven in plastic strips to create fringe allowance but forgot the scrap yarn. The slippery Tencel started to come apart at the end. I quickly tied a few knots to hold the strips in place and trimmed and twisted the fringe immediately.

• The scarf isn’t quite as long as I would have liked. My initial warp was lime green, lavender, and gray. I didn’t weave a narrow sample because I thought for sure it would work out. I sampled a lot on the actual scarf warp trying to make it work before cutting off and replacing the lime green with lavender. That shortened my warp more than I thought it would. I could easily have added 10” to my initial warp length, but my optimism about the colors stopped me. 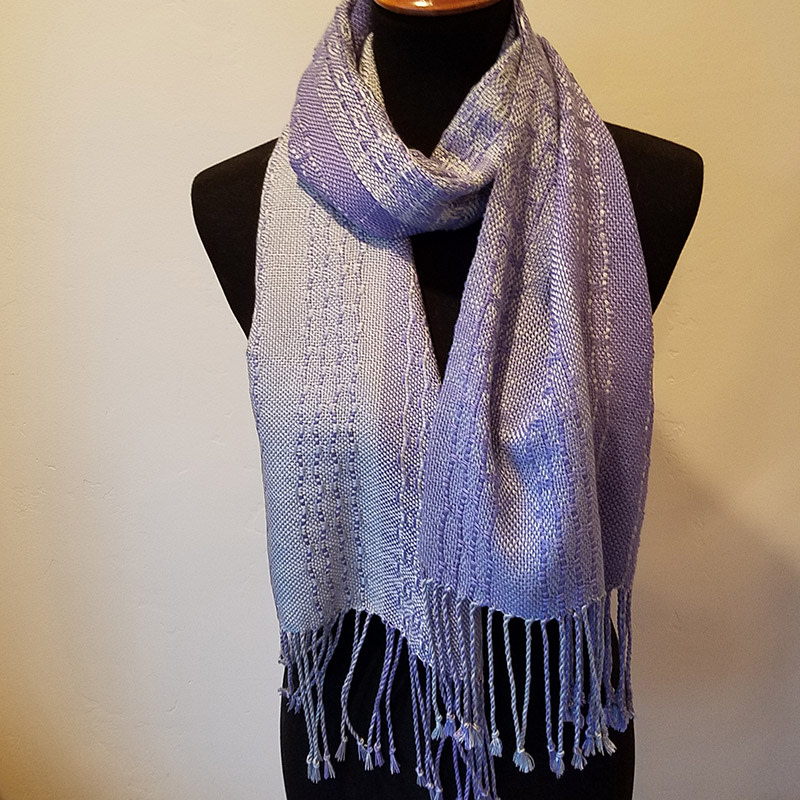 My scarf is slightly shorter than I wanted, but overall I'm happy with the end result. Photo by Susan E. Horton.

• I put the heddle rod on the wrong side of the heddle. I was weaving on a rigid-heddle loom and decided to use a heddle rod with string heddles for one of the pick-up sequences. I had never used one before and couldn’t tell from the literature whether it went behind or in front of the heddle. Of course, I put it in front and then realized that didn’t work at all. I could have thought that through for 10 seconds and figured it out, but instead I picked up close to 70 ends and placed each one on the rod only to immediately take it all out and start over behind the heddle.

As far as I can tell, there aren’t any unwanted skips in the scarf or weaving mistakes that can’t be fixed. There is comfort in that.

When will I stop making weaving errors? There’s no telling, but I’m willing to keep up the experiment.