Weaving on the Weekends

Taking a project from design through sampling and then completion is slower when you weave only on the weekends.

A warp of gray and lavender stripes with a subtle pick-up pattern, ready to weave and finish. Photo by Susan E. Horton

People often ask me if I still weave, and my response is, “Yes, but my weaving is limited to the weekends.” For example, I spent the past three weekends working on my rigid-heddle loom with three weaving goals I wanted to achieve, and I am still far from finished. The first goal was designing a pick-up pattern that created a two-sided fabric with some deflection. The second goal was to challenge myself in my color choices, and the third goal was weaving a scarf that incorporated what I had learned.

For the pattern, I started with a pick-up design in Jane Patrick’s The Weaver’s Idea Book. I used 8/2 Tencel doubled in a 12-dent heddle for the majority of my warp and put on a short narrow warp of red, white, blue, and gray to sample. After cutting the sample off the loom and wet-finishing it, I saw clearly that although I was able to weave what was in the book, it didn’t meet my needs for a scarf. The half-inch floats were too long. It also didn’t meet my goal of having two sides that were equally attractive. I played around with clasped weft at the end of the warp and cut the sample off the loom.

For the second sample I changed my warp colors to gold, rust, and red. Using weaving software, I figured out a way to reduce the float lengths but maintain some deflection. Although the sample was small, I could see that the threading and pick-up patterns were solid, and the fabric was different but attractive on both sides. It was now time to choose colors.

Working on goal number two over the second weekend, I made the classic mistake of loving three colors (gray, lavender, and lime green) on cones when I set them next to each other and then warping my loom with them. By this time, I wanted to put on a full warp, so rather than a narrow sample, I warped 10 extra inches at full width to use for color sampling. I spent the better part of a Sunday morning sampling with 10 different colors. After wet-sampling, I had to admit to myself that the colors didn’t work well together in a warp. 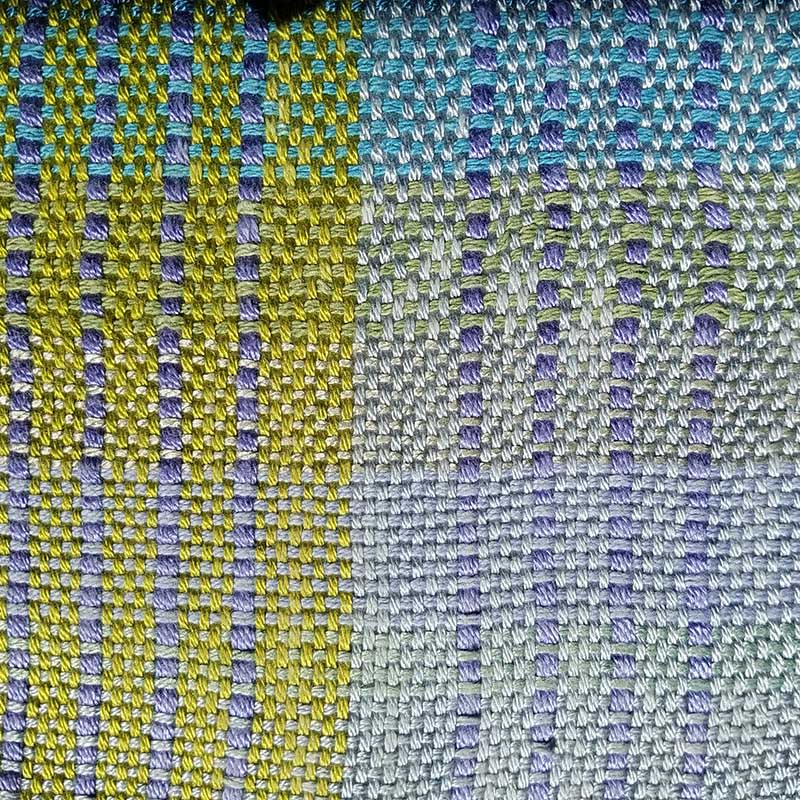 I couldn't find a weft to pull together this lime-green and gray warp with lavender stripes. Photo by Susan E. Horton

This past weekend, I cut out the lime-green warp and rewarped the loom so that it is gray on one side and lavender on the other. It isn’t much of a color challenge, but I like it much better, and I have a plan for a slow color transition in the treadling that I think will be pretty. I wove 5 inches in my pattern as planned, and all seems to be going well. Next weekend, weekend four, I hope to reach my final goal, and weave the scarf.