Warping Back to Front

Warping a loom back to front has its advantages! Lease sticks and a raddle keep your warps in order, and you start out securely attached to the back beam.

Photo by Chris Chow on Unsplash

Warping a loom back to front has its advantages! First of all, since the warp is beamed first, it's safely attached to the loom from the get-go, rather than lying in front of the room if you have to stop in the middle. Additionally, if you're warping a loom with multiple ends per dent, you can avoid the problem of your warp threads getting tangled between reed and heddles. 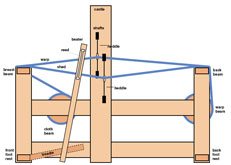 If you're worried about your warp threads, say if they're very fine, sticky, or overly-twisted, we recommend warping back to front with two crosses.