Warping a loom with multiple ends per dent can be a challenge, especially if you warp front to back. Here's Madelyn with help on transferring the cross.

Whenever I have a weaving project that calls for a closer sett, which then requires me to double or triple up a certain number of dents, my woven piece often has lines through it where I have threaded the dent with multiple ends. What can I do when I'm warping a loom to prevent this from happening in my finished piece?

The finer the warp threads, of course, the closer the sett. If you have 4 or more ends in a dent, reed marks will show in the cloth. To eliminate them as much as possible, machine wash the pieces, allowing agitation (putting a towel in the machine with the handwoven can help). You may not want to do this with fine silks (wool usually finishes without reed marks with hand washing). If you do weave many different types of fabrics using a wide range of yarn sizes, it is good to have a number of reeds (4- and 6-dent reeds for rugs, 8-dent reeds for wool fabrics, 10- and 12-dent reeds for cottons/silks, and 15-dent reeds for the finest threads. 20-dent reeds exist, but I've never needed one that fine. Even with 60 ends per inch, I use a 15-dent reed and sley 4/dent. 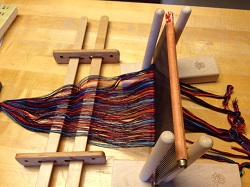 In an earlier question, someone asked me how to keep multiple ends in a dent from twisting before they get to the heddles if you warp from front to back, I described the process of transferring the threading cross to the threading side of the reed so that you can thread from the lease sticks. Recently, I did that and took photos of the process of warping a loom that way. 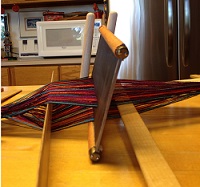 I sley the reed (I like to do this at a table but you can also do it at the loom) and keep the lease sticks in the cross as I sley. After the sleying is complete, I slide a flat, wide pick-up stick in the position of the lease stick closest to the reed. Putting tension on the warp on both sides of the reed, I turn the pick-up stick on edge so that the opening extends to the other side of the reed. I slide the first lease stick into that opening. 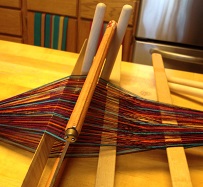 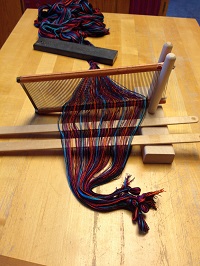 The hard part is providing enough tension for these openings and having a third hand to place the sticks. A helper for this task is very useful!