Two Sides to Every Cloth

Every piece of cloth has a story to tell, and some cloth has more than one story.

In his Notes from the Fell from Handwoven November/December 2020, Tom Knisely talks about the stories cloth tells and how some cloth has two stories to tell, one from each side. —Susan

I know this sounds a little crazy, but I believe that every piece of cloth has a story to tell. When I go antiquing for examples of textiles, if I find a particularly wonderful piece, I hold it for a while and try to imagine its history and how it came to be. Some pieces are definitely easier to decipher than others.

I love coverlets, and I love it even more when the coverlet has a cartouche in the corner giving the name of the weaver, the weaving location, and the person for whom it was woven. I can try to find out more about the weaver based on that little bit of information. A sampler might have a cross-stitched name and date: “Hannah Bailer is my name and Lancaster County is my home, 1823.” There you go. There is at least the beginning of the story. By searching geneology websites, it might even be possible to find out about Hannah’s history, her family before her, and the family she gave to the world.

For unmarked pieces, it’s nearly impossible to know their story. I might be able to estimate the time period by examining the threads used to weave it. Sometimes I’ll recognize a style of fabric and determine it was most likely woven during a certain period because of the style’s popularity at that point in time. For many pieces, it’s a guessing game. I think it is a terrible injustice not to give them a story, so I just make something up. It’s really quite easy when you have an overactive imagination. Let’s pretend you’re an antique dealer trying to make a sale. That carriage blanket is from the 1850s when the winters were brutal. It’s all the family had to keep them warm in the buggy on their way to church. Not bad, not bad, but how about this? That handspun, handwoven linen sheet was destined to be bandages for the wounded during the war, but she just couldn’t tear it up because it was from her hope chest. Sniff, sniff, sniff. There, see how easy it is?

Now stay with me as I try to refocus. If every fabric has a story to tell and every story has two sides, then every fabric must have two sides, right? Well, that might seem obvious, but sometimes you find some interesting surprises when you turn the cloth over.

Most woven fabrics are reversible. Take for instance a piece of overshot. On one side of the cloth, there appears to be a defined circle with a patterned rose motif in the center of the circle. On the other side, it reads as the negative image of the top side; that little rose is now a plain-weave block. Summer and winter and block doubleweave are two more examples of positive and negative pattern images. You can use either side of the fabric; the choice is yours.

Now what would you say if I told you that you could have two fabulous sides that look completely different on each side? Impossible you say? Well, let me tell you about other ways to weave double-faced fabrics.

The sample in the photograph above is a hot pad woven with 8/4 carpet warp and rags. Our beloved Madelyn van der Hoogt explained to me one day that the structure is known as stitched double cloth. I have used this technique for many rag rugs when I want a heavier rug. Not only do I get a hefty rug, but it’s reversible! When I heard the term double cloth, I immediately thought of doubleweave, but they are not the same. Block doubleweave has two layers that are separate until you change to the next pattern block. The pattern blocks are joined both vertically and horizontally, much like little pockets of ravioli. With stitched double cloth, however, the warp threads are moving back and forth between the two sides and stitch the weft materials to the surface of the cloth. One side of the piece weaves as a 1/3 twill, and the other side weaves as a 3/1 twill. This can be woven with a simple straight-draw twill threading and a direct tie-up on a four-shaft loom.

I have seen and woven this method in two other structures: complementary plain weave (doubleweave overshot) and double-faced overshot. I first saw a reference to double-faced overshot in a Handwoven article by Charles Lermond (November/December, 1989). He wrote about using two pattern yarns to weave different colors on the front and back sides of his placemats and napkins. A conventional tabby thread alternates between the pattern picks. When choosing an overshot pattern, you must be mindful of the length of the pattern floats. You see, you are no longer weaving this structure as a 2/2 twill, but you are changing it so that the top surface is weaving as a 1/3 twill and the bottom of the cloth is weaving as a 3/1 twill. This imbalance makes for a longer float. By losing shafts in the tie-up, a four-thread float may become a seven-thread float. Careful thought must be given as to how this fabric is going to be used. 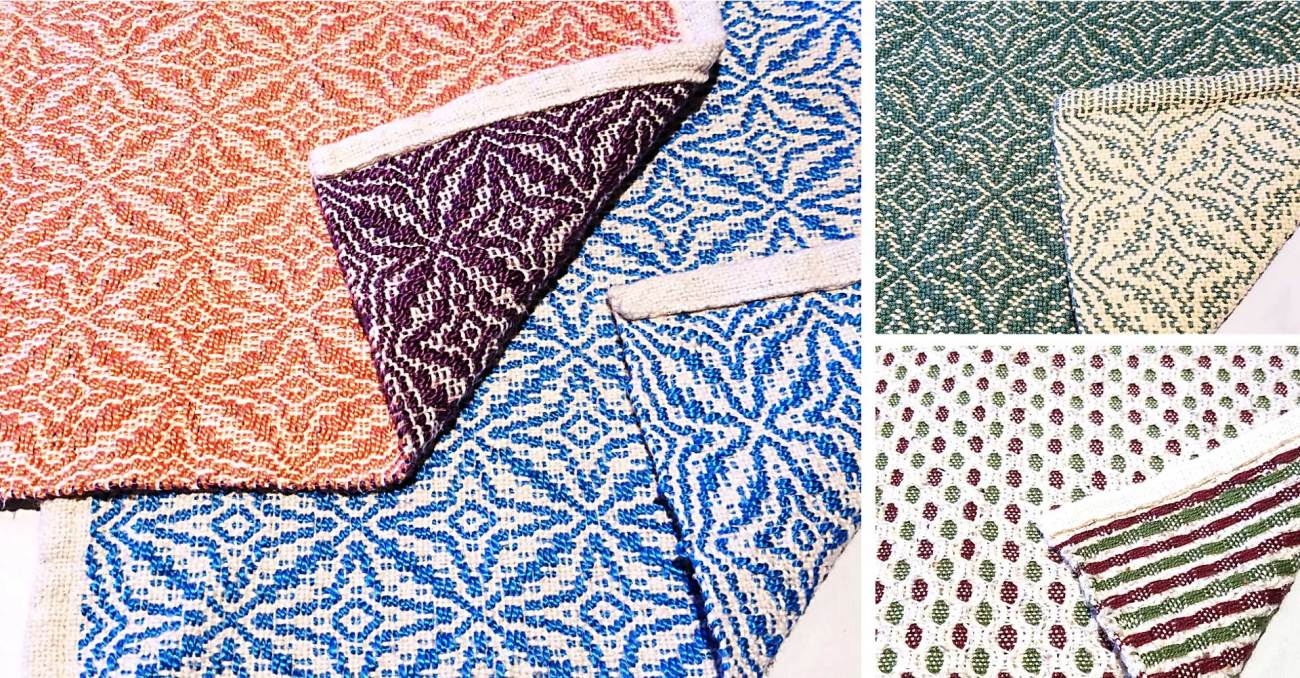 To illustrate the differences between these examples, I picked one of my favorite patterns, Star of Bethlehem. I first warped my loom and wove a sample in the traditional manner. I then changed my tie-up so that I could weave it as double-faced overshot. You can see the difference between the two sides of the fabric in the top sample in the photograph on the left. Now, how cool is that? Next I wove a placemat in complementary plain weave. All three are easily recognized as the pattern, Star of Bethlehem, but look at how different they are. The warp for the placemat in complementary plain weave consists of two contrasting colors threaded dark/light across the warp. When weaving this piece, I used the dark weft for the upper layer and the light color for the lower layer. I now have a reversible fabric with two color variations of Star of Bethlehem.

So now you see that not only does every fabric have a story to tell—some fabrics go the extra mile and have two beautiful sides to that story!