Sizing Up My Weaving

What would my sizing experiment look like after weaving & washing? Only a hot bath can tell...

Sized with gelatin and sett as fine as I could on my rigid-heddle loom, this yak/silk shawl was crisp and full of body right off the loom. But what would come out in the wash?

When we left my sizing experiment, many months ago, there was trouble on the horizon in the form of Toby the Cat, who thought that the stiffened yarn was a fun new toy. I'd decided to try sizing my warp with gelatin to prevent the heddle from abrading the yarn, a moderately plied yak/silk blend that I feared might fuzz and pill while weaving. The thought of Toby gumming up my carefully sized warp had me chasing him around my loom frantically. (I couldn't even use my usual deterrent, a snootful of water from a squirt bottle, which would have dissolved the gelatin.) Lesson 1: Lock the cat out while warping. (Should have known this one already.)

I planned to direct-warp my rigid-heddle loom in a rough gradient with stripes of 3 colors, adjusting the color pattern as I threaded the second heddle. I'd wound one of the colors into a center-pull ball, and I started threading with it.

One of the typical drawbacks of a center-pull ball is that the center can collapse, forming a knot. Working from the outside of the ball, though, I found another problem: the stiff yarn expanded out like a spring, and the roughened surface snagged against itself and made knots. I wound up cutting the yarn at the peg or beam, untangling the knot, and tying on again so many times that I threw away a hundred yards or more. Lesson 2: Keep the sized yarn well organized and under tension. I put the remaining sized hanks on the umbrella swift, and winding those colors was much easier.

Because of my warping shenanigans, my tension was awful. For some reason that seemed like a good idea at the time, I had about a dozen warp ends weighted off the back of my loom, where they tinkled like wind chimes. When I put away the weaving, I had to lift them up onto the loom and cover them to prevent further tangling. (You may be seeing a theme here.) It took a while, but finally I wove a generous length of shawl. 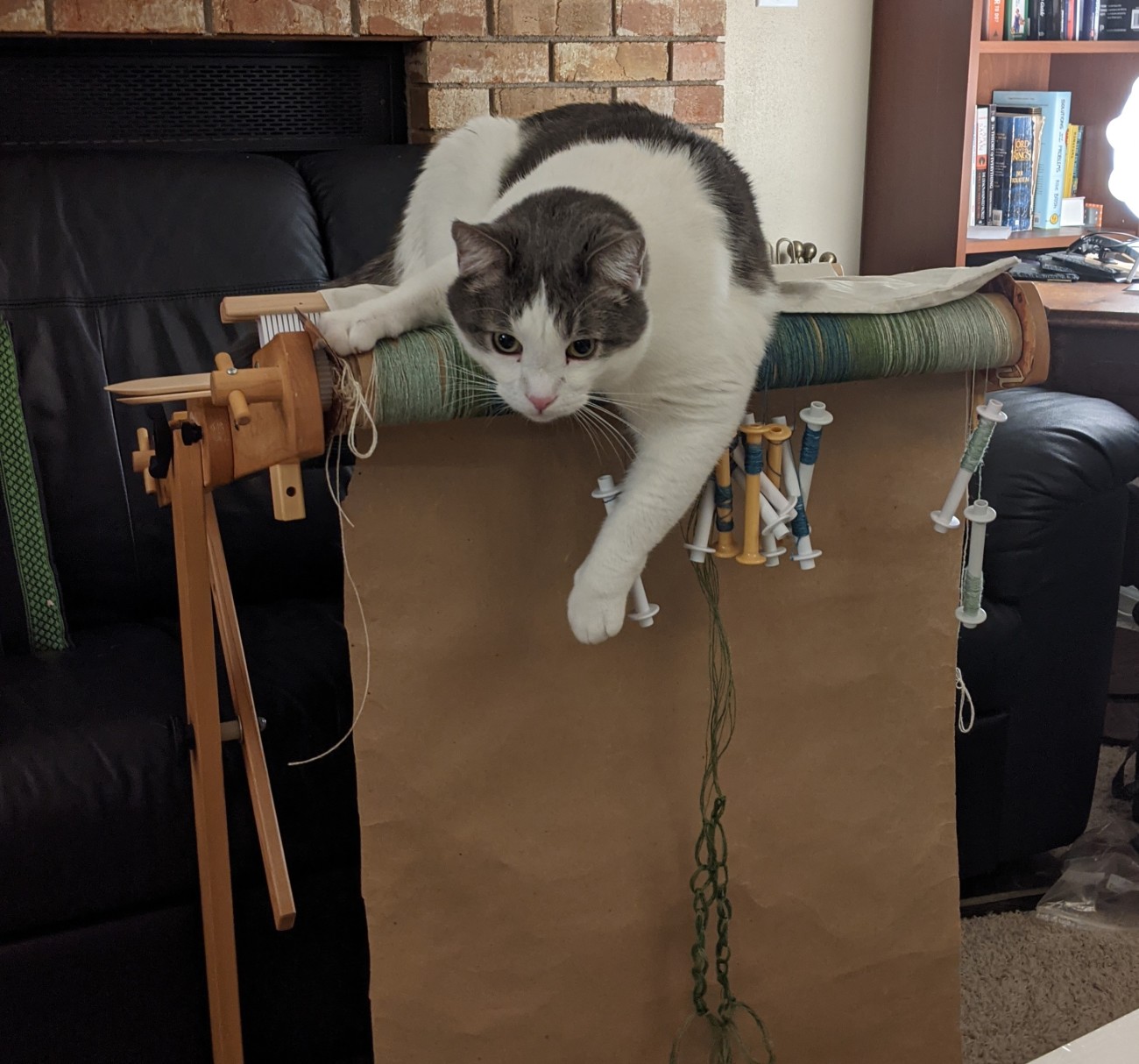 After I cut my shawl off the loom, I fixed some skipped warps and tidied up a bit, then admired the crisp, even look of the fabric (see photo above). I knew that wet-finishing would change the hand completely, so I wasn't in a hurry to wash it, but in the end I was curious to see what became of my experiment. I washed it several times in very warm water, once with wool wash, and spun it nearly dry. At this point, with my fabric heavy and wet, I could see a problem on the horizon: the warp and weft slid around on each other more than I'd like. Before panicking, I tossed the shawl in the dryer to firm things up, hoping that the yak that I'd tried to prevent from fibrillating while weaving would become a little fuzzier now. Out of the dryer, the shawl's texture surprised me: it has the drape and silkiness I'd anticipated from a 50% silk yarn, but it feels a little springy. 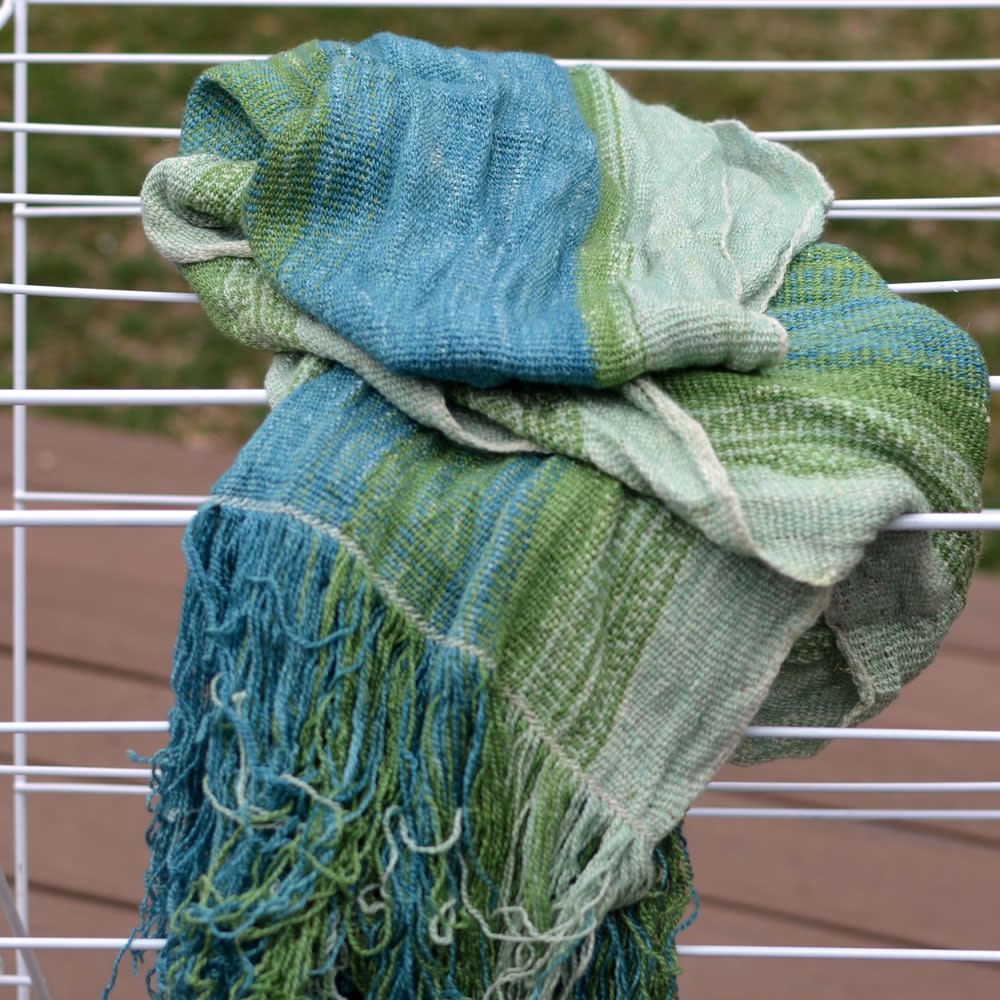 With the gelatin sizing washed out, the shawl is drapy, surprisingly springy, and has a gorgeous hand.

So was the experiment a success? Well, yes and no. The surface of the yak/silk is smooth, not abraded by the heddles, which was my goal in the sizing experiment. After washing and drying, my shawl feels good, but it's definitely sleazy in appearance. This isn't the fault of the sizing, it's just another reminder that a better weaver would have sampled! In my eagerness to see what would happen, I plunged ahead, but a quick sample would have told me to choose a toothier weft yarn instead of the same yak/silk as the warp. (Heck, it might have told me that I didn't even need to size the warp in the first place, but what fun would that be?) Lesson 3: Sampling takes time & yarn, but it saves time & yarn.

I gave some thought to cutting out the weft, sizing the yarn again, putting the warp back on the loom, and weaving it again, but Susan Horton convinced me that it would be stubborn beyond all reason. Instead, I'm going to give my shawl a good pressing, then practice needle-weaving in some of the more open spots. And if I ever decide to try it again, here's what I should do better next time...

Will I do those things? Well, I'll let you know.