Notes from the Fell: Rag Weaving--For the Love of Rags

Rag weaving is a wonderful way to take old textiles and give them new life. It should come as no surprise that weavers from around the world and throughout time have embraced weaving with rags.

These sakiori obis showcase the Japanese style of rag weaving. Each obi would have been worn as a sash as part of a traditional Japanese outfit such as a kimono. Photos courtesy of Tom Knisely.

Rag weaving is a wonderful way to take old textiles and give them new life. It should come as no surprise that weavers from around the world and throughout time have embraced weaving with rags. In his Notes from the Fell from the March/April 2018 issue of Handwoven, Tom Knisely shares his international rag-weaving discoveries. —Christina

The genetic connection is sometimes obvious, but I never see it as anything less than marvelous: when I look at my daughter Sara’s hands and see that she has the same finger shape as mine, or I look at my granddaughter Imogen and can see she is her daddy’s girl through and through. These likenesses are wonderful to see; you can’t deny the relationships.

I once watched a documentary hosted by a food anthropologist who explained the migration of the noodle and pasta, especially in relation to the stuffed pocket of dough: from pot stickers and dim sum in China to ravioli and tortellini in Italy. Then don’t forget the Cornish pasty eaten for lunch by miners in Cornwall, England, or the empanada—both consist of savory meat that’s wrapped in dough and baked and are convenient to take along with you and eat as you work.

What does all this have to do with weaving? Well, just like with food, people have been coming up with similar and brilliant ideas about weaving and textiles for years, not in just one area or location, but in different parts of the globe. The first time I recognized this was at Convergence in Cincinnati, Ohio, where I met a couple of ladies selling textiles from different parts of the world. On their table were narrow strips of fabric woven with thinly cut rag strips as the weft and very fine cotton in the warp. The vendor explained that these were Japanese obis used around the waist of a kimono much like a belt. She said that this style of obi was woven by weavers in the rural areas of Japan where frugality was a way of life. This style of weaving is known as sakiori. I bought two, and that started a collection of not only sakiori obis but of rag weaving of all kinds.

I was very familiar with rag rugs—I had woven dozens of them myself. What I now wanted to know was this: How many other people around the world were also intrigued with the idea of weaving with rag strips? My search was on, and it didn’t take long to come up with another type of rag weaving. I was walking through the antique mall in town and spotted a rag rug for sale. Or the tag said it was a rag rug. I looked at it carefully and saw that this was no rag rug, my friends. It just wouldn’t have held up underfoot. The warp was about the size of 10/2 cotton, but the weft was very fine cotton rags. It was seamed down the middle and was the size of a bed covering. That is exactly what it was. I had found a catalogne blanket originating from Canada.

I remembered seeing pictures of these catalognes in the book Keep Me Warm One Night by Dorothy and Harold Burnham. How it got to south-central Pennsylvania is anyone’s guess, but it had to come home with me, that was for sure. I couldn’t help but think that weaving catalognes is a Quebecois tradition, maybe even a tradition brought to Canada from France.

Since that time, I have met several catalogne woven blankets and their weavers. On a recent trip to Canada, I learned that rag weaving is very common there, and the tradition of weaving catalogne blankets has been going on for many years and still continues today.

When the weavers wished to get away from the seaming of two panels and the careful matching of horizontal pattern stripes, they looked to the Quebecois company Leclerc Looms for help. Leclerc agreed to meet the weavers’ needs and started building 100- and 120-inch counterbalanced looms so that two weavers could sit side by side and weave wide blankets without the center seam.

While I was there, I was offered the opportunity to weave on such a loom. Folks, it was not as daunting as it might seem. In fact, it was really quite easy. I sat at one end of the longest weaving bench I had ever seen, and another weaver sat at the other end. We both had our own set of treadles to operate the shafts, and we treadled in tandem. With a firm throw from the right, a beat, and a shed change and then a firm throw from the left, a beat, and so forth, we wove together. The word awesome seems to be overused, but there is no better word to describe what I felt that day. The whole experience was truly awesome. Not only did I make a new weaving friend, but I came away with a wonderful and lasting memory of my trip to Quebec.

After comparing the sakiori obis and the catalogne bed covering, I found they had drape and a supple hand in common. They are quite different from the rag rugs I was familiar with. This was mainly due to the approach of these styles of rag weaving: both sakiori and catalogne weaving use very narrow cut or torn rags that are woven into warps with fine threads. The rags are usually cut or torn to 1⁄2 inch or less. Sometimes fine threads are also woven between the rags to add to the drape.

I wanted to know more about the rags used to weave these pieces without picking a great antique sakiori obi apart, so I contacted my friend Stephen Szczepanek, who owns the Sri textiles gallery in Brooklyn, New York. Stephen specializes in Japanese textiles, so I asked him if he could locate a fragment of a sakiori woven piece for me to analyze. On a trip to Japan, Stephen found and brought back a tattered sakiori hearth cover. The tears and broken warp threads made it easy to look at the strips of rags.

What I saw were thinly cut fabrics that were woven much earlier than when the hearth cover was woven. These fabric strips were cut from fabrics that outlived their usefulness and could only be used for sakiori weaving. I have done this with rag rugs from my own area. It is so much fun to take an old, unwanted rag rug that is ready for the trash and bring it home to analyze. I have found rugs woven in the early 1900s that contained rag strips of fabric that were woven much earlier. It’s as if I am looking through a window in time as I try to imagine what those fabrics were originally used for. Sheets, an apron, or maybe a family member’s clothes went into weaving that rug. 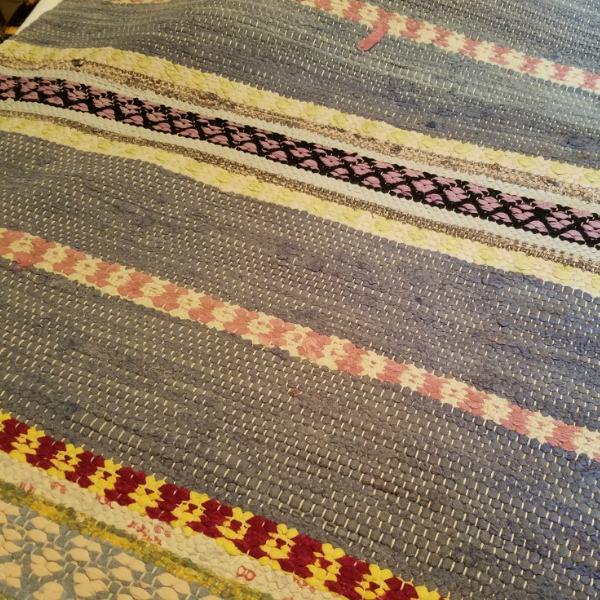 Cultures around the world find ways to incorporate old textiles into new weaving to prolong the items’ usefulness and prevent waste. The weaver of these Swedish rag rugs took old, worn-out fabrics and turned them into a sturdy rug.

I have to tell you about a recent find. At another antique mall, I found a rag rug that had a true Scandinavian look to it. It was mainly weft-emphasis because of the wider and more open sett to the warp; there were also bands of twill woven with rose path diamonds. The sales tag said that it was a Swedish rag rug. “Huh,” I thought. “How did this get here?” My mind started to race. As with the custom of many antique malls, the owner of the rug was not around to talk to, but I got the phone number of the dealer and called to find out about the rug’s history.

To my surprise, the dealer told me that the rug was about eighty years old and was woven by his grandmother. She was Swedish by birth but emigrated to the United States and lived in West Virginia until her death. Her style of rag weaving was so different from the other weavers in West Virginia that she was always kept busy weaving rugs for people in the community. I was flabbergasted with his story. I thanked him for his time and tales and promptly bought the rug and added it to my collection of rag weaving.

I am having so much fun exploring and collecting different styles of rag weaving. These pieces, no matter what their condition, give me so much to think about. They inspire me and give me ideas for my own work. I am grateful—and an admitted hoarder of many types of old textiles—and the love of these old rag pieces is truly special. It’s fun to think how weavers around the world are connected by a theme as simple as rags.

In closing, I want to share something very personal. Last spring, I lost my friend of forty-five years. We were buddies since high school. To help with the grieving process for many of us who knew him, I hosted a cutting party at my home, and we cut rag strips from dozens of Bill’s shirts. With a prewarped loom ready to weave, friends and relatives, weavers and nonweavers alike, wove strips of Bill’s shirts into a memorial table runner for his partner. We laughed and cried and shared stories of our friend Bill, and all in all, it was a time of healing and remembrance.

In a hundred years, will someone stop and wonder about this runner? I think I’ll leave a note and pictures.