In Praise of Cultural Appreciation

In the Endnotes from the March/April 2018 issue of Handwoven, Anita gives her thoughts on Cultural Appropriation vs Cultural Appreciation. —Christina

Diné (Navajo) Germantown Eye Dazzler Rug from the late 1900s. While it’s ok to take inspiration from Diné weaving and designs like this one, it’s not Ok to copy it and sell it as your own. Photo courtesy of the Science History Institute

Weavers around the world have “borrowed” from each other for centuries for better or worse. At best, this cultural exchange benefits both parties as repertoires are expanded. At worst, one side takes the intellectual property of the other to make a profit—many early British weaving factories reproduced complicated Indian cloth on Jacquard looms. In the Endnotes from the March/April 2018 issue of Handwoven, Anita gives her thoughts on Cultural Appropriation vs Cultural Appreciation. —Christina

In our turbulent world, I am always cheered by signs of unity and hope. One of the hopeful signs I see is a new awareness about the evils of cultural appropriation: co-opting aspects of another culture without sensitivity or respect. Millennials, in particular, seem to be cognizant of the need to respect other people’s heritage.

However, even when the pendulum swings in the right direction, it can swing a little too far. I think we are sometimes a bit quick to see cultural appropriation when what’s happening is really appreciation, the kind of positive cultural exchange that has shaped humanity from the beginning. Human culture began because roving bands of Paleolithic hunter-gatherers shared their tools, art, and stories. The flowering of science and medicine in the Renaissance was spurred on by translations of work by Arab scholars. Japanese design was a catalyst for the Art Nouveau movement, and African sculpture influenced and inspired Henri Matisse, Pablo Picasso, Paul Klee, and other pioneers of modern art.

Humans are an imitative species by nature. I will never forget watching a Bolivian woman demonstrate Jalq’a weaving, completely unaware that the Peruvian woman behind her was carefully lifting and studying a corner of her manta, no doubt with an eye to enhancing her own weaving repertoire. Nor will I forget a weaver in Guatemala proudly showing off a huipil dress with a woven design of a peacock that was obviously taken from a European embroidery pattern.

Without cultural exchange, people in Portland, Oregon, where I live, wouldn’t be able to enjoy a whole world’s worth of cuisine in a city block of food carts. We wouldn’t have all the beautiful ethnic garments that many of us grew up with: kaftans, dashikis, kurta dresses, ponchos, ruanas, those flattering cheongsam (mandarin) collars, and the lovely tribal prints that have been in fashion in recent years. 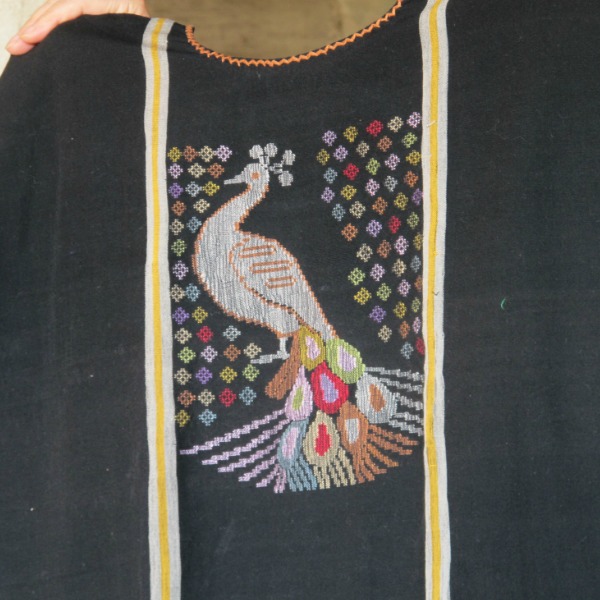 A huipil woven by an Amuzco weaver in Xochistlahuaca, Mexico, inspired by a European embroidery pattern. PHOTO COURTESY OF ANITA OSTERHAUG

Cultural appreciation can have profound impact on the people being appreciated. For example, when Mary Meigs Atwater traveled in Central and South America in the early 1900s, she was exposed to all kinds of gorgeous fabrics and traditional techniques. Years later, she documented some of those techniques in her Shuttle-Craft Guild Bulletin and her book Byways in Handweaving, bringing awareness and appreciation to American weavers. Some of those weavers and their students went on to work for fair-trade organizations that have helped traditional weavers preserve and find markets for their crafts. (You can find many of them through www.weavearealpeace.org.)

All this said, cultural appropriation is a real issue, so much so that Deborah Chandler, founder of Weave a Real Peace (WARP), former director of Mayan Hands, and author of Learning to Weave, recently clued me in on efforts to protect the authorship of indigenous textiles in Guatemala. As she says, it’s “a sticky issue that is arising in indigenous communities all over the world.”

So how can you know whether you’re appreciating or appropriating? It’s all about respect. First, respect the meaning of the textile or design. When I took a Navajo weaving class from Kathe Todd-Hooker years ago, she told us not to copy traditional Diné (Navajo) designs because they have spiritual meaning in Diné culture. You would not desecrate a flag, so don’t desecrate someone else’s sacred symbols. Second, respect the artisans who make their living by the textiles they create. It’s great to learn diverse weaving techniques, especially if it involves travel and face-to-face learning with the artisans themselves. As we appreciate the work that goes into indigenous textiles, we tend to become ambassadors and customers for the artisans, helping them to support their families. It’s not okay to reproduce indigenous textiles and sell them yourself, just as it’s not okay to reproduce and sell any other weaver’s design without permission.

As Mary Atwater said, “We are two-handed creatures, and the close connections between hands, heart, and mind are a part of our being . . . The great modern revival of handicraft is a wholesome thing, making for peace, comfort, and pleasant living.” The world would be a poorer place if we all kept to our corners. Appreciation of other weaving cultures is a wonderful way to forge new connections between the hands, hearts, and minds of people around the world. And when that appreciation brings increased peace, comfort, and pleasant living to all the weavers concerned, it is a fine thing.