Notes From the Fell: Shrouds to Die For

Have you heard of green burials? Maybe, but have you ever considered weaving your own shroud? Join Tom as he considers his options.

The green burial sites at the Paxtang Cemetery look more like public park than a traditional cemetery. PHOTO BY TOM KNISELY

My father always told me that there were two things guaranteed in life: death and taxes. Nobody likes paying taxes, and making decisions regarding end-of-life issues is uncomfortable for many people. Young people do not seem to think about their own mortality, while older people, such as myself, start to think about it frequently. You ask yourself what kind of end-of-life service you would prefer: a traditional funeral with a viewing and burial, or maybe cremation and a lovely celebration-of-life ceremony? Until recently, these were the only options that I knew to exist. However, while vending at a Mother Earth News conference, I was introduced to a rather new alternative to burial or cremation: the green burial.

I find it amusing that there is nothing new about this sort of burial practice. People have been burying their loved ones this way for millennia. Still, let me tell you what I have learned about the green burial. It’s fast and simple and basically comes down to composting your loved one. With a green burial, you simply wrap your recently deceased loved one in a biodegradable fabric shroud and place them in the ground to become part of the natural environment. No embalming is required. Caskets are optional and if chosen, must be made of a material that is not hazardous to the ground—no lacquered finishes, just a simple wooden box. If you want something fancy, woven wicker or willow basket caskets are options.

While researching green burials, I learned about a felted wool casket that I found disturbingly interesting, but so fitting for a spinner and weaver such as myself. Although I have to admit that the handwoven willow basket casket from England seems also very fitting, don’t you think? For a few hours, I got totally lost on how very cool this all is, and then I had a reality check. It hit me that we are talking about returning to the earth and composting.

The felted wool casket was very expensive to my mind for what it was. I suppose you could make your own from a couple of fleeces and roving from your stash. Not only would it help to reduce that growing stash of fiber, but what fun it would be to tell your family and friends that you are felting the ultimate wool container: your casket. They will be sure that you have gone over the edge this time. Ha! I love it!

On the other hand, the whole idea of burying a handwoven willow casket has me uncomfortable. Yes, I bought it from the artist, but to then bury it so it decomposes is like defacing a work of art, and that just seems wrong to me. 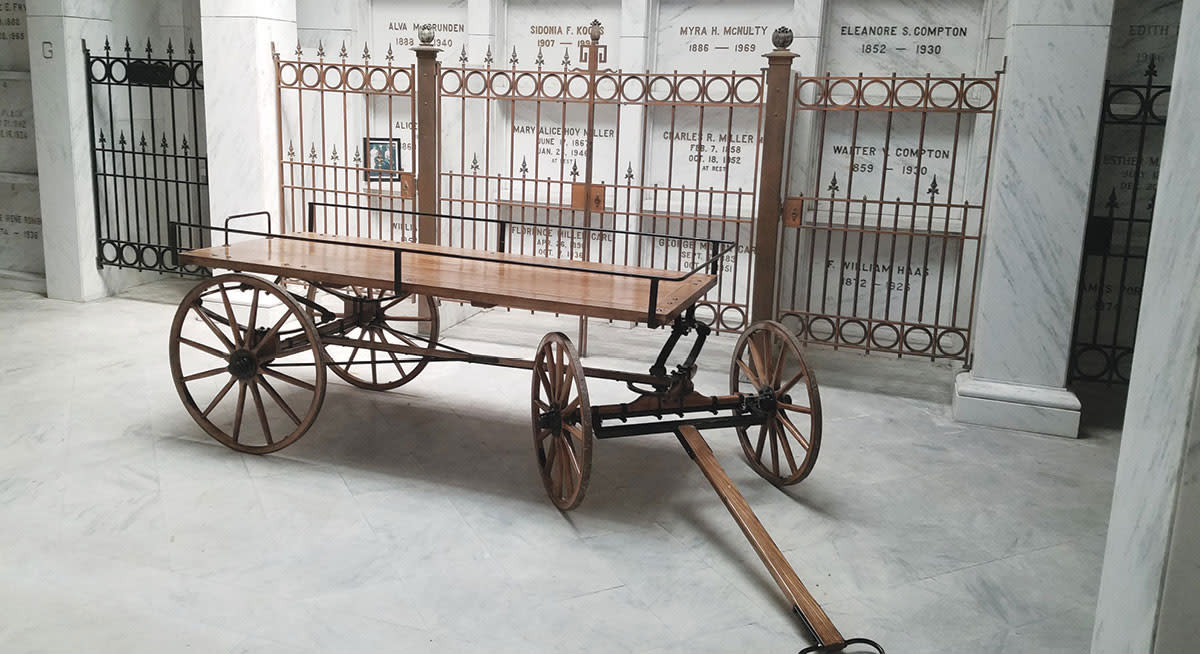 This is a handbuilt carriage or wagon in front of a traditional mausoleum that originally carried the body to the gravesite. It would be pulled and pushed by several individuals. PHOTO BY TOM KNISELY.

Let’s skip the casket part altogether and just get down to the shroud. That’s what piqued my interest in the first place. When I heard the word shroud, it was like the angels sang, and all I could think of was how wonderful it would be to be laid to rest in a handwoven shroud of my own design and woven with my own two hands. Wow! The very word doesn’t often come up in daily conversation. The only other time I have heard the word was in reference to the famous Shroud of Turin, which was believed to be the burial cloth that covered the body of Jesus after the crucifixion, although scientific evidence dates the shroud to medieval times.

Well, by this time I was totally intrigued and started doing more research on shrouds for green burials. I found a cemetery near my home that allows for green burials, the Paxtang Cemetery in Harrisburg, Pennsylvania. I made an appointment to talk to the owner of the cemetery, Alesia Skinner. There are a dozen or so acres of natural woodlands used by the cemetery, making it feel more like a park. Alesia is a lovely, soft-spoken woman who spent several hours with me explaining her vision to add green burial options to her cemetery.

When I told Alesia about my interest and the shroud idea, she quickly pulled out several shrouds for me to see. I must say that the shrouds were nothing like I expected. I was envisioning a long length of fabric, but these shrouds were carefully sewn to resemble a cocoon. The body is placed inside and then tied together with fabric strips as ties. These shrouds were offered in either natural 100 percent cotton or silk. Alesia explained that there can’t be any synthetic fibers that would not decompose over time, which made perfect sense to me.

When I asked if I could weave my own fabric, say, as a long length several yards long and maybe even weave the ties on an inkle loom, Alesia sadly said no. They only allow the type of shroud she showed me. I was a little disappointed because I thought it would be so cool, not to mention meaningful. Nevertheless, I had a wonderful time and learned a lot.

My curiosity was piqued, so when I got home, I started to look up other cemeteries that offered green burials here in Pennsylvania and found several more. Penn Forest Natural Burial Park in the greater Pittsburgh area is just one, and there are several more in the eastern part of Pennsylvania. When I contacted them and asked if I could be buried in my own handwoven fabric shroud, they saw no reason not to.

The undertakers and cemetery owners were fascinated with the idea and wanted to know more about weaving. I was probably the first weaver they’d ever encountered, and now I’m the guy who wants to weave his own burial wrapping. They were totally into the idea and explained again that the fabric must be biodegradable and no synthetic fibers could be woven in the cloth. Inkle-woven closures also intrigued them. One of the undertakers had watched someone weave on a tape loom before and so could understand my vision.

Left: One of the shrouds used in a green burial. PHOTO BY TOM KNISELY. Right: A traditional cemetery plot. PHOTO BY DISCOVERING FILM ON UNSPLASH.

“Okay,” I thought, “now I’m on the right track and it shows you only have to ask around to get the answers you’re looking for.” The woman I talked to at Penn Forest measured a shroud she had in her office. The main portion of the shroud measured 70 by 108 inches. There were two other pieces of fabric sewn to the top and bottom of the shroud that each measure 24 by 30 inches. These are used to fold over the head and feet of the deceased. A pocket of fabric was also sewn into the shroud to place a wooden board to help support the body as it is lowered into the grave. The woven tape that binds the shroud to the body measured 3 by 85 inches, and you would want several of these tied at intervals along the length of the body.

I was grateful for all the information that I received from each cemetery owner. They were helpful and happy to talk to me about shrouds and how green burials are performed. With all this information, I started thinking about how I would weave the fabric for a shroud. The length would not be a problem, but the width presented a challenge since my loom isn’t 70 inches wide. I could sew two panels together like a blanket or coverlet might be pieced together. I also thought it might work to weave the shroud as a doubleweave project. A warp threaded for doubleweave with a 36-inch weaving width would fit the bill. It would finish to about the suggested width. Then I thought, “Why not weave a large doubleweave tube resembling a sleeping bag?”

There is still more to think about, but I like the idea of a green burial. I also like the idea of weaving the fabric for my shroud in a pattern of my choice and weaving the tape and bindings. Since my doctors tell me that I’m heathy as a horse, and they see no immediate rush to get started on weaving a shroud, I think I will take some time to weave the perfect pattern for me. It’s the perfect weaver’s send-off.