Notes from the Fell: A Stash of Memories

We all have cones and skeins of yarn that have stories that make them too special to use in just any project.

A few of the skeins that live in Tom’s Hotel California. Photo By Tom Knisely.

A lot of great stories start with “Once upon a time,” or perhaps even “It was a dark and stormy night.” The story I want to tell begins with “He went to the cupboard and what should appear?” In our house we have a cupboard we call the Hotel California after the famous Eagles song. There is a line of the lyrics that goes, “You can check out any time you like, but you can never leave.” My wife and I laugh a little about the contents of the cupboard; it’s full of yarns and threads that we will never use because of sentimental reasons.

I know it’s crazy thinking, but it’s true, and if I ask to see a show of hands right now—go on, raise your hand—you’ll see you have the same problem. We all have cones and skeins of yarn that have stories that make them too special to use in just any project. For our run-of-the-mill projects, we have other cupboards and shelves with other yarns.

We started out with a plastic storage bin for these special yarns, but as the lid began to bulge, we realized we might as well invest in the wall cupboard that became the Hotel California. Going back to the Eagles song, it says, “Plenty of room at the Hotel California.” There was, and we filled it. I invite you to come on over and open up the cupboard. Pull out any cone or skein from the collection and go ahead and ask, “What about this one?” We will smile and nod our heads and say, “Oh, that one is really special,” and then tell the sentimental story that goes with that particular cone or skein. Sort of sick, isn’t it?

I know you’re curious as to what’s in the cupboard, so let’s open it up and take a look. You will find several very large cones of singles linen. They take up a lot of valuable space, but I can’t get rid of them because first, they are linen (and I love linen), and second, they were purchased during a great trip to Vermont. We also have lots of single skeins that were gifts from friends and loved ones that were picked up on their vacations. Unfortunately, there is not enough in any of those skeins to make anything on their own, and I would have to combine them with something else—but what? 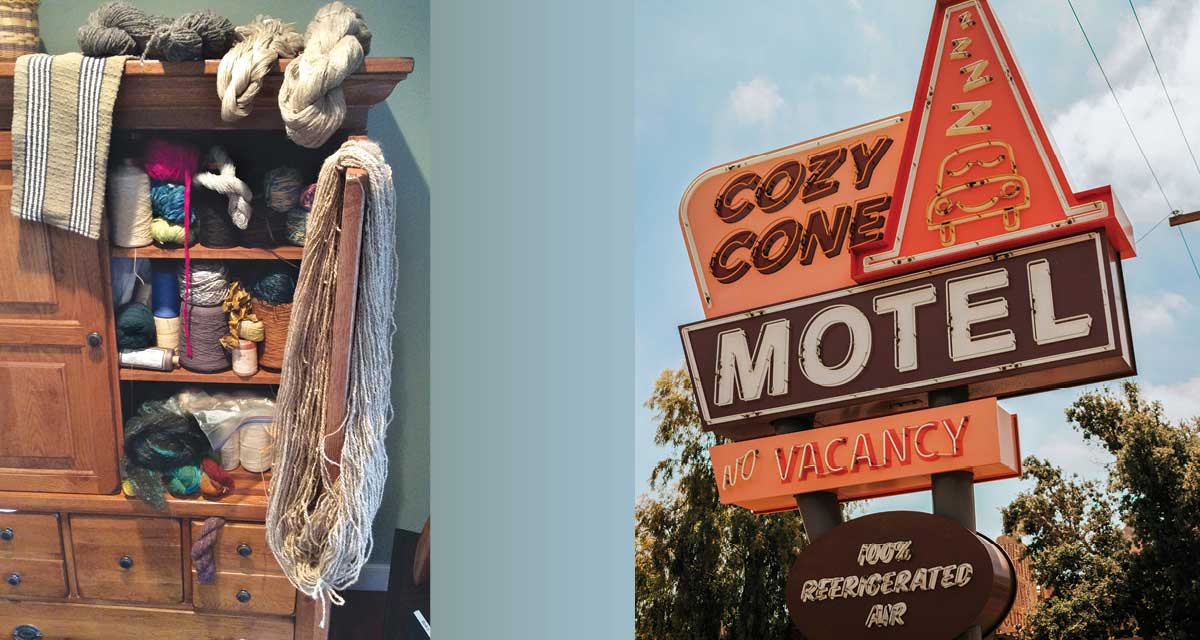 Above, left: Tom’s cupboard, the Hotel California, is filled to the brim with extra-special yarns. Photo by Cindy Knisely. Above right: Cones can check out any time they want, but they can never weave. Photo by Daniela Araya on UNSPLASH.

We have a skein of stainless steel and silk thread. I had to buy it because, for heaven’s sake, it’s stainless steel and silk. It’s so unusual that it fits right in with all the other misfit yarns in the cupboard. I love this skein because of the diverse combination of materials it’s made of. It’s as if Fay Wray and King Kong had a child together. I remember where I got that thread. I went to New York for the weekend and just had to go and shop at Habu Textiles. I also bought paper yarns and a small single skein of cotton blended with fiddlehead fern lint. These yarns all belong together as a remembrance of that wonderful weekend in New York, but they do not necessarily belong together in a woven piece.

I justify keeping these unusual yarns and threads this way: A stamp collector would never put a valuable stamp on the envelope to pay the electric bill. Some things are worth keeping . . . just because!

One shelf holds a skein of my very first attempt at spinning. It is kept as a reminder of the progress I have made over the years. There are also lots of other handspun yarns; many are small skeins of breed-specific wool to remind me of what that particular breed of sheep fleece feels and acts like when spun. There are also skeins of alpaca, llama, mohair, and fiber from various other critters, and I do mean critters. Somewhere there is a small skein of possum and wool yarn from New Zealand. We can’t leave out all the handspun cellulose fibers that I have spun, either. I found flax and hemp to be a dream to spin, but my first attempts at spinning cotton were a disaster. My dislike for spinning cotton was turned on its head when I was put under the kind and patient tutelage of Joan Ruane. Joan gently explained all the things I was doing wrong and corrected my ways. Now I love spinning cotton, and the cupboard holds bags of different varieties of cotton to someday spin into thread for dish towels.

One of my favorite yarns was spun as a memorial to a favorite family pet. Yes, it’s dog hair. When I hold that skein in my hands, it brings back a flood of memories. There may be enough to weave a scarf. I’ll have to work on that and give it to one of the kids someday. There is probably a little cat hair mixed in with every skein. Not enough to call it a blend or even enough to mark the skein with a percentage. I guess it’s somewhere about one one-hundredth of a percent, but I am sure it’s in there. (I once met a gentleman who kept kosher and followed the Jewish laws that prohibit wearing shatnez—cloth made from a mixture of vegetable and animal fibers. He told me he had his suits tested to see if there were any flax fibers mixed with the wool in his clothing. “Wow,” I thought, “it’s a good thing that there aren’t any religious laws banning cat or dog hair in clothing at my church.”)

Now let’s look at all the discontinued threads. Every so often, a yarn manufacturer decides to cut a yarn from its line or eliminate colors to make room for new ones. This is often a decision based on sales: the dyehouse might require you commit to dyeing perhaps a minimum of 100 pounds of a color in every size of thread. That’s a lot of thread. I can understand the decision to eliminate some colors, but when the color Ginger was axed from my favorite line of pearl cotton, I was shattered. No, not Ginger! So, I bought up all I could. And, of course, now Ginger lives in the cupboard with other favorite threads that are no longer to be had. It’s hard to use these yarns because there is no more to be had—ever!

I was thinking the other day that these yarns are a lot like the contraceptive sponge. Do you remember the episode of Seinfeld when the character Elaine was devastated when she heard that the maker of the sponge decided to discontinue it? Elaine went all over the city and bought all the contraceptive sponges she could get and then filled her cupboard. She then carefully evaluated each boyfriend to see if he was “sponge worthy.” Is this story sounding slightly familiar? We carefully evaluate projects to see if they are “Ginger worthy.” Slightly sad, isn’t it?

I leave you now thinking about your own stash of yarns. Are they like the ones living in our Hotel California? Remember, “You can check out any time you like, but you can never weave.”