Discovering Our Roots: The History of Modern American Handweaving

In the November/December 2017 issue of Handwoven Tom Knisely travels to a little town in Michigan to learn more about his handweaving past and ends up learning about the history of modern American handweaving.

A Metal placard on a Gallinger Crafts loom and inspiration for Tom’s visit to Hartland. PHOTOS BY CINDY KOEDOOT

In this “Notes From the Fell” from the November/December 2017 issue of Handwoven Tom Knisely travels to a little town in Michigan to learn more about his handweaving past and ends up learning a special story about the history of modern American handweaving. —Christina

When I travel around the country, I love to find yarn shops in the local area. I bet you do, too. Isn’t it marvelous to take home a souvenir skein or two as a reminder of the fun you had? The scarf I wrote about in a previous “Notes From the Fell” was handspun from some silk roving that I bought in Tucson several years ago (“Notes from the Fell: Celebrate,” September/October 2016.). When I see that scarf today, it reminds me not only of my daughter’s wedding but also all the fun I had on my trip to Arizona. My stash has a history.

Last year, I took a few days to visit a friend in Holland, Michigan. “What shall we do while you are here in Michigan?” she asked. I suggested we go to Kalamazoo and visit the folks at Great Northern Weaving. So off to Kalamazoo we went and, of course, I found some wonderful rug yarns that I just had to have.

Next stop, Hartland, Michigan. My friend Cindy has lived in Michigan all her life and had never heard of Hartland. Why Hartland? you ask. Well, this is where the adventure begins, so let me tell you a story of Osma Gallinger, Cromaine Crafts, and the sleepy little town called Hartland. 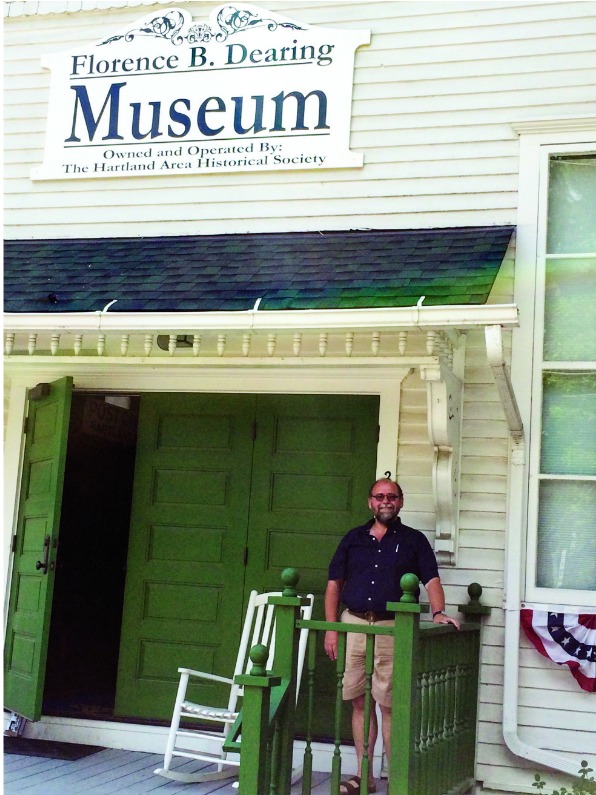 Tom on his recent visit to Hartland, a town rich with weaving history.

When I started my career at The Mannings Handweaving School, Harry and Katherine Manning would tell me stories of Osma Gallinger and her husband, Milo Gallinger. Osma and Milo originally lived on the farm where the Manning studio was in East Berlin, Pennsylvania. Osma taught classes, wrote books, and published a magazine about handweaving while Milo built the Gallinger looms in his workshop. When Milo passed away, Osma sold the studio, then called “Creative Crafts,” to her two former students, Harry and Katherine Manning. And so they renamed the studio The Mannings Creative Crafts.

When I started at The Mannings, there were a few old Gallinger looms with brass plates that read, “Gallinger Loom, Cromaine Crafts, Hartland, Michigan.” When I asked about these looms and the story behind them, Harry told me that Osma had started her legacy in Michigan. So there we were, traveling up old Route 23 to Hartland to see what we could find out about Osma and Milo Gallinger.

When we arrived, we found a quaint little town that hadn’t changed much in years. Not knowing what I might find, and only going on the stories that I had heard, we started our adventure by parking the car across the street from the Hartland Area Historical Society building. We went inside to be greeted by several volunteers and the curator of the collection. I explained my connection to Osma and Milo Gallinger and that I knew much about their life post-Hartland, but what I wanted to learn more about was their role in Cromaine Crafts while they lived there in Michigan. What I found out was for me priceless.

To read the rest of the story and learn more about what Tom found in Hartland make sure to check out the November/December 2017 issue of Handwoven.