Learn about two shuttles that are sometimes considered more advanced, as they require finesse on the part of the weaver. You might just want to learn how to use them!

Double-bobbin boat shuttles and end-feed shuttles are two types of shuttles you may want to add to your collection. Photo by Susan E. Horton

I started with stick and belt shuttles that are ideal for frame and rigid-heddle looms. They are also useful when you are at the very end of a warp and your shed has narrowed, but you still have a tiny bit to weave to complete a project. I also included the rag shuttle in the same post for its simplicity and straightforwardness in winding and weaving.

Next, I tackled ski and rug shuttles, and I discussed using them for heavier yarns and for times when you need to be able to load a lot of weft. These shuttles are super for rep weave, weft-faced weaves, and pieces that use bulky yarns throughout.

In my third shuttle post, I covered the most used and popular of hand shuttles, boat shuttles. All boat shuttles have some common features, but I broke the catagory up into style, size, and weight. As you scale up in shuttle type, these factors are important to the user.

In this fourth post, I discuss double-bobbin boat shuttles and end-feed shuttles. There are lots of opinions about both, so I think that they are worthy of discussion. 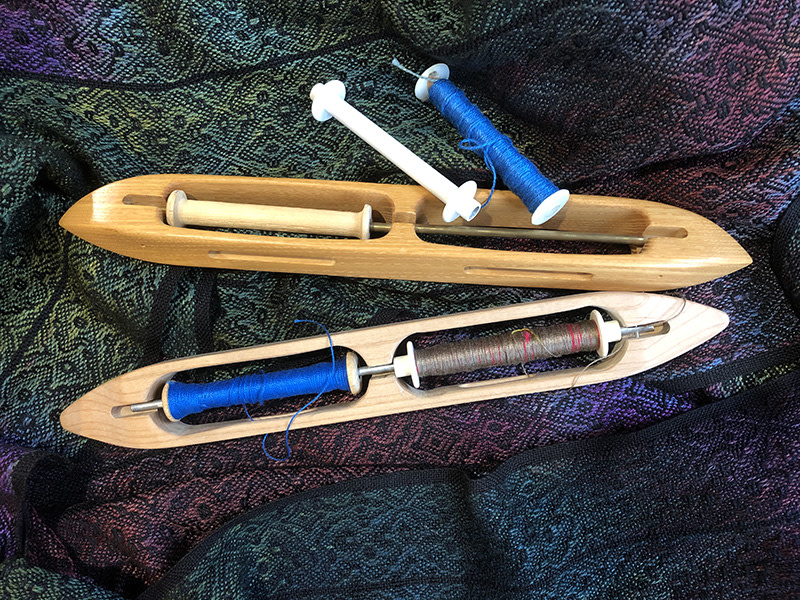 Double-bobbin boat shuttles (DBBS) have two boxes in most cases and hold a bobbin in each box. (Note: The DBBS in the opening photo has only one box.) All of the rules I laid out for using a single bobbin shuttle in post #3 apply to the double-bobbin shuttle. Using a DBBS requires some dexterity in catching both bobbins with your fingers. You may find that an overhanded catch will be more successful than an underhanded catch. You may even want to learn to catch both ways, even for single-bobbin shuttles.

It’s important that the two bobbins weigh about the same, although I don’t necessarily advocate using a gram scale to check. Just keep their relative weights in mind because weight affects the reel out rate of the bobbins. If your weaving allows it, you might turn your DBBS over one or two rotations after each pick so that the bobbins feed as a twisted pair. This is tricky and will slow down your weaving, but it helps with maintaining tension. If it’s important to keep the two weft threads in line (one after the other), then it might be best to use two single-bobbin shuttles. 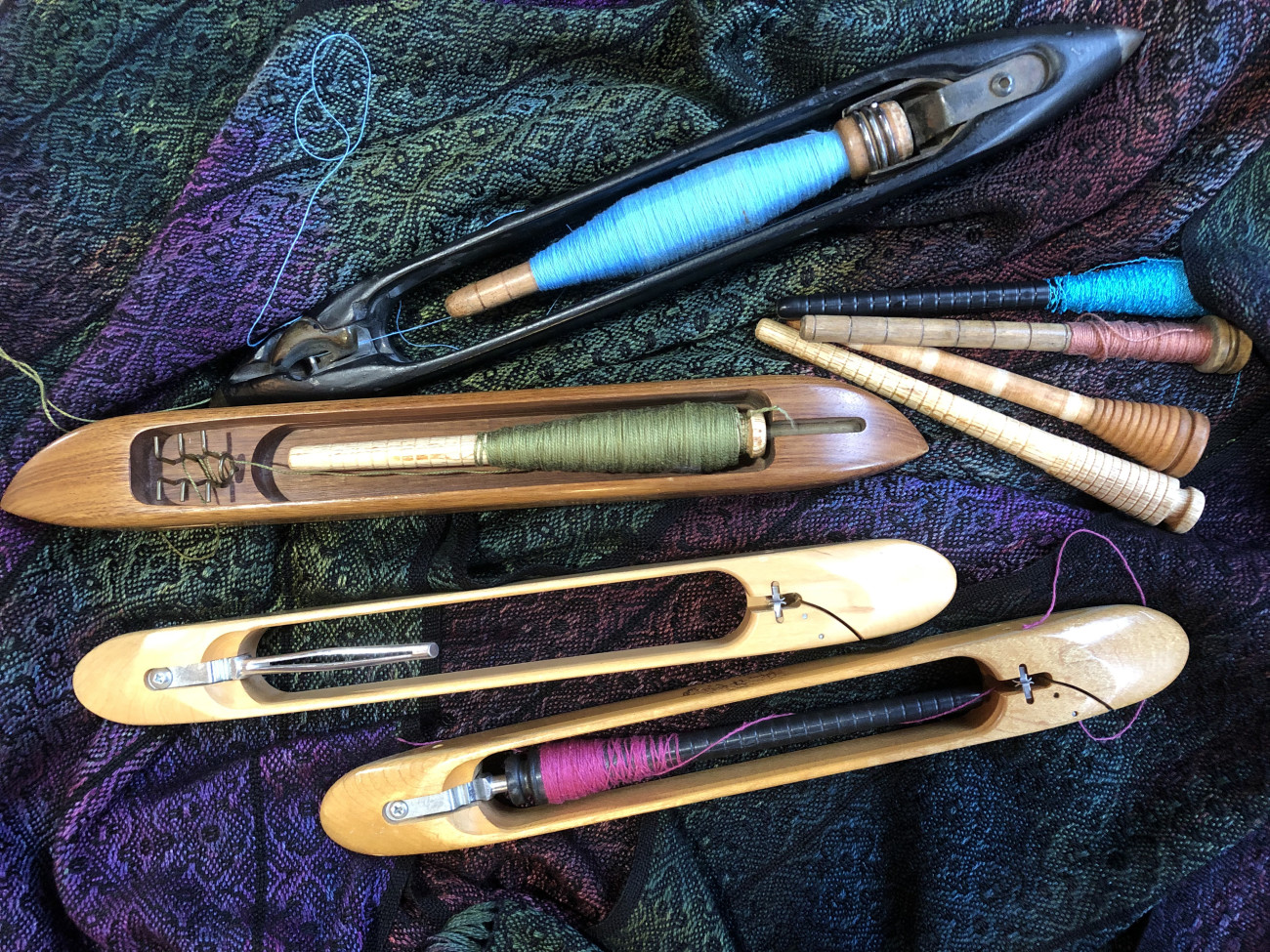 End-feed shuttles use quills to hold the weft. Photo by Liz Moncrief

End-feed shuttles (EFS) were introduced during the Industrial Revolution by way of the flying shuttle, which was part of the movement to speed up all operations of the weaving. I have worked on a couple of looms that incorporated flying shuttles, and my article on the Weavers Delight Loom in Handwoven, March/April 2019 comes to mind. That loom used a metal cylinder for passing the weft rather than what we consider an EFS today. There are different types of end-feed mechanisms, and there are two types shown in the photo above.

Contemporary end-feed shuttles are substantially lighter than their historic counterparts, as they are used by a weaver rather than a machine. The lighter-colored shuttles at the bottom of the photo incorporate a tension mechanism that actually squeezes the weft as it reels out. This device can be adjusted using a hex wrench to allow for different types of yarns and tension requirements. On these shuttles, the tensioning device will always be to the right with the feed-out toward your fell, as you do not turn the shuttle around for the pass to the left. The wrench can also be used to raise or lower the tip of the pirn, which is used in place of a bobbin.

The darker colored EFS in the photo (third from the bottom) uses a simple set of 6 polished wires just before the feed-out. The weaver can thread the weft through as few or as many of these coils as needed to achieve the desired tension. On this shuttle, the tensioning wires are on the left with the feed out again facing toward the fell, no matter what direction it is traveling.

End-feed shuttles use a pirn. Wind a pirn starting at the thick end (bottom) and work toward the tapered end, winding in 1-1.5" increments. Winding carefully will allow for a flawless reel-out. Keep in mind that your weft will add twist as it reels out from the pirn, which can cause problems with very tightly twisted yarns. This is akin to what happens when winding off from a spool placed horizontally versus placing the spool on the floor on one end. Depending on which end is on the floor, unwinding the yarn will either add twist or remove twist. This isn’t usually a problem when winding off from a cone, but it is something to take into consideration. The pirn will hold slightly more yarn than a standard 4" bobbin, but don’t let that determine your choice of shuttle. The EFS and pirns are an investment, and the pirns are best wound using an electric winder to control the tension.

When I’m asked to pick my favorite of all my shuttles I resist, as I have several of each type and use them interchangeably. One day I demand the strictest of tension and no fuss, and the next I’m all about the fine wood in my hands and am willing to fuss a bit for that sensory factor.

When choosing a shuttle, remember that the weight and circumference of a shuttle are important to weavers with small hands and can affect your comfort in capturing it as it exits the shed. The 2 DBBSs in the middle photo weigh in at 3.7 and 5.3 oz. and have circumferences of 5.25 and 5.5". Both fit small hands well. The EFS shuttles in the last photo weigh in at 5.8 and 9.8 oz. with circumferences of 5.5 and 6.25". The larger one may be a bit large for some weavers, but what beautiful wood!

I included the big EFS in the last photo merely as a prop. It is a relic from a large fly shuttle loom. It weighs a hefty 19.5 oz. probably due to the brass tips and component parts. Once I saw a beginning weaver using one in the absence of anything else, believe me, I quickly found her a replacement!