In this third entry of our shuttle series, Liz covers boat shuttles, one of the most popular types of shuttles.

After writing about stick, belt, net, and rag shuttles and then rug and ski shuttles, today I’m writing about what seems to be the most popular style, the boat shuttle. As with the other shuttle types, boat shuttles come in many variations, each variation suited to a specific function. Boat shuttles are used with bobbins and quills, so I’ll include best methods for winding them.

Boat shuttles generally come in lengths of 8"–13" and can accommodate a 4" bobbin, although there are some longer ones that can hold a 7" bobbin. True to their name, boat shuttles look like boats with tapered ends and a middle depression known as a box that holds a bobbin, bobbins, or quills. Boat shuttles generally have a slight upward or forward curve, to facilitate entry into and exit out of the shed, and are ergonomically friendly for long periods of weaving.

Closed bottom boat shuttles have a solid bottom of wood that enhances the glide of the shuttle across your warp and shuttle race. Some even have a slight depression at the bottom to lessen any friction that may occur.

Open bottom boat shuttles weigh slightly less than closed bottom shuttles, although the difference is negligible. Winding your bobbins correctly and not overloading them is important when using an open bottom shuttle as protruding weft will inhibit the shuttle’s glide across the warp. 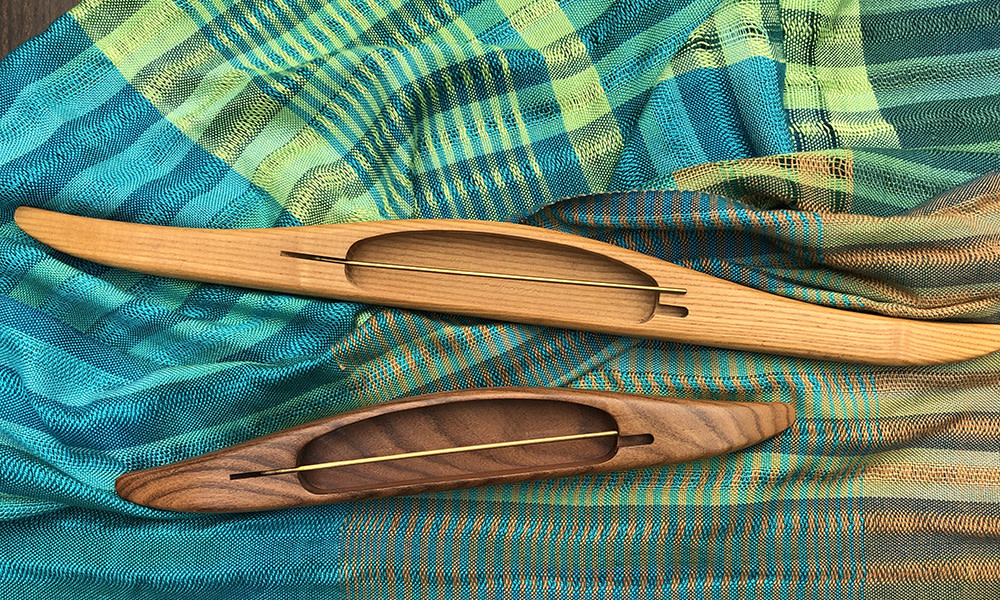 Swedish shuttles are slim and lightweight.

Swedish boat shuttles are slim, lightweight, and primarily used for linen weaving on wide warps. They work well for the extremely low and tight sheds sometimes found on draw looms and for weaving on a split-shed or even opphamta. This type of boat shuttle uses a quill, which I’ll explain further on.

Almost any boat shuttle will work for you and your weaving style, so long as you maintain well-wound bobbins and quills, so let’s focus on that aspect.

If you generally weave with 8/2 size yarns or thinner, you should be able to wind a good amount onto a bobbin. Bobbins come in plastic, wood, and metal and are 4" or 7" long. You’ll want to make certain that your bobbin has a minimum of ½" of “play” on each end when sitting on the spindle in your shuttle because the bobbin needs to move from side to side as you throw the shuttle. It’s not wise to try to fill that void with rubber bumpers or beads, as that hampers the side-to-side movement.

If you are experiencing loops at your selvedges, try throwing your shuttle faster and use your thumb or forefinger to catch the bobbin as it exits the shed, thus preventing that “zing” factor of your bobbin continuing to unwind after the shuttle has stopped. Shuttle speed will impart just a bit more tension at the selvedge.

If you live in an especially dry climate and experience a lot of static electricity with your weft, try inserting a piece of fuzzy cloth in the bottom of a closed-bottom shuttle. You might even consider slightly wetting the cloth with water to “soften” stiff and wiry linen yarns as the weft draws out. This creates a “microclimate” of humidity inside the shuttle box.

When winding a bobbin, aim for even and firm tension and a horizontal build from right to left and back again, until you have a slightly rounded hump in the middle. Wind moving the weft quickly from side to side so that the threads aren’t parallel to each other on the bobbin, which can cause them to catch. Resist the impulse to overwind as a too large hump in the middle will drag on the bottom of a closed shuttle or will fall “below deck“ with an open one inhibiting your shuttle’s glide. Some plastic bobbins have built-in bumpers on each side to keep your weft from slopping over. If your bobbins don't have bumpers, wind on those bumpers first and then proceed to fill in the middle.

A slim spool of thread can also be used in place of a bobbin, a time saver when using sewing thread for the hems of kitchen towels and the like. If you don’t like the spool rattling around, add spools on either side for a quieter weave, just not so many that the spool can’t turn.

You can purchase either plastic or hardened cardboard quills, but you can easily make your own and use them in any shuttle that takes a bobbin. If you have a bobbin winder with a spindle, simply wind a 5" x 5" piece of paper onto the spindle in a tube fashion, seal with tape, and trim to size. Try to make a quill sturdy enough to create a rigid base for your weft. 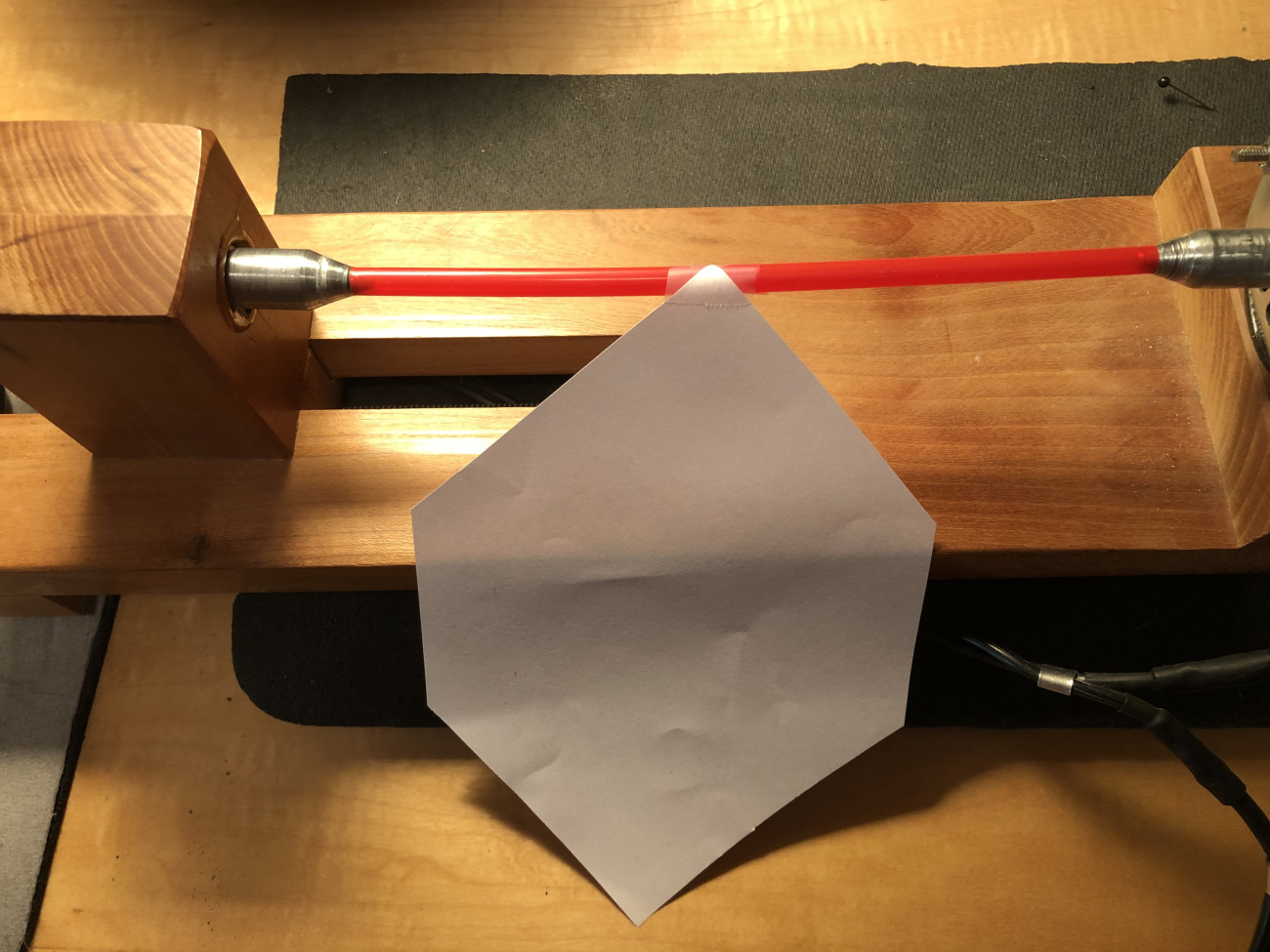 Use a straw on a two-ended winder as the base for your quills.

If you have a double-ended winder as I do, use a plastic straw as a base and wind the paper around the straw in the same manner. I wind starting on a corner and use a tab of scotch tape to attach that corner to the straw first. The straw gives better support to my style of electric winder. 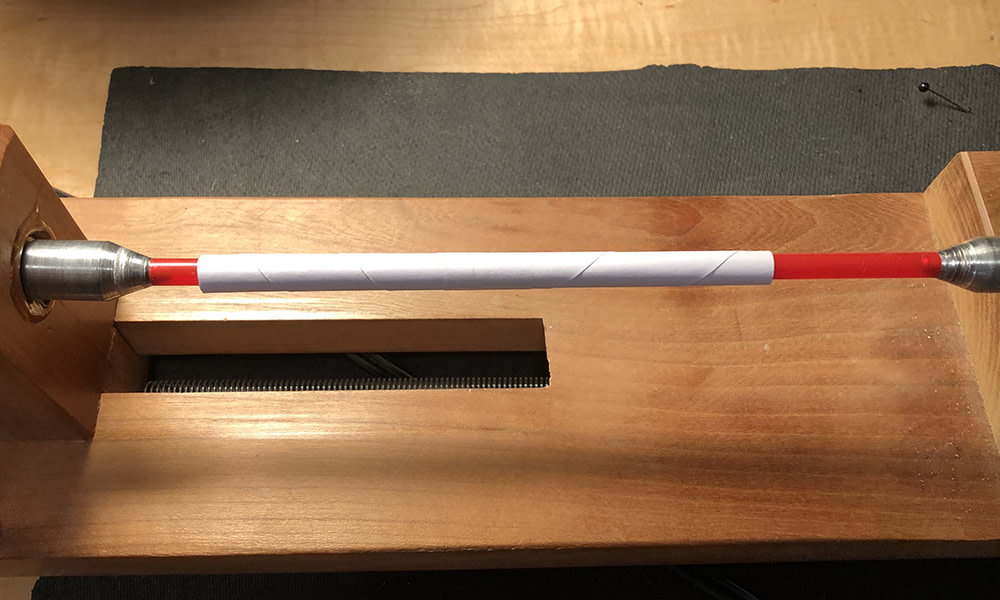 Fill the quill as you would a bobbin, moving from side to side, with each pass becoming shorter until you have a well-round center hump. If you aren’t paying attention and make a ridge somewhere along the way, unwind and start again. The ridge will snag your reel-out and you’ll be left with messy selvedges.

The closed bottom shuttles in the photo at the top weigh 5.75 oz and the open bottom shuttles weigh about 4.1 oz. They are all about 12" long. The weight difference is probably caused more by the wood they were made from than the shuttle structure. That slight variation in weight probably wouldn’t affect you, but you may prefer one over the other. 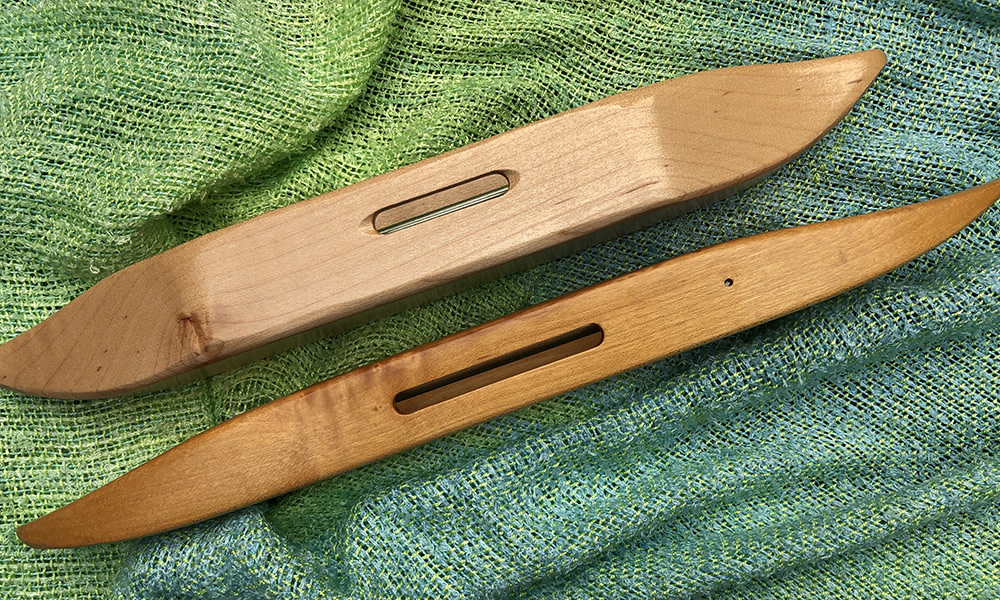 Shuttle height is another aspect you should look at. In the shuttles in the photo above, one shuttle is a low profile shuttle at less than 1", and the other has a standard profile of 1½". The difference in these two shuttles’ circumference is about 1", which might make one or the other more appealing to you depending on your hand size. If your loom has tight sheds, that also may be a decision factor.

The Swedish shuttle is longer than the others at 18", yet it is only ½” high and weighs only 3.9 oz. Some Swedish shuttles have weights imbedded in the wood to facilitate shooting them across a wide warp. Swedish shuttles are a dream to use but can be awkward for narrow warps as you need to hand the shuttle through the shed, thus compromising both speed and good selvedges.

My recommendation, if you’re in the market for a new shuttle, is to borrow from a friend or visit a weaving shop, sit at a loom, and simply throw the shuttle as many times as you have the patience for. You’ll discover soon enough which shuttle works for you, and you may want more than one type depending on the type of weaving you do.

My next shuttle post will cover specialty shuttles such as double-bobbin, end-feed, and fly, and maybe a few more for good measure. If you have a question about a specific shuttle type, now would be the time to ask so that I can cover it. Please send your shuttle questions to [email protected]