I recently realized that nearly all of my bizarre historical fashion posts have focused on women’s fashion. Today, I’d like to talk about the bizarre practice of using bombast.

Examples of Elizabethan fashion including bombast-padded sleeves and bellies. Illustration by Albert Krestschmer from the wonderful Costumes of All Nations, published 1882.

I recently realized that nearly all of my bizarre historical fashion posts have focused on women’s fashion. This gives the impression that only women were guilty of being completely ridiculous in the name of looking good, but anyone who’s familiar with this history of fashion knows this is not even remotely true. Men, after all, were the first to wear high heels (it enhanced the calves). So today, I’d like to talk about the bizarre practice of using bombast.

If you’ve ever looked at a portrait from the Elizabethan Era and marveled at the puffy sleeves, you might be delighted to know that the volume on those sleeves isn’t from stiff fabrics or extra starch—they’re from stuffing. Known as bombast, the stuffing wasn’t light and fluffy. Men and some women would stuff their sleeves with rags, cotton, horsehair, and even bran, the latter of which sounds especially terrible and like a good way to get mice in your clothes. Bombast went beyond sleeves, too. Men would also stuff their doublets so they could give themselves a larger belly.

This practice inspired the adjective “bombastic.” Back in the day, bombastic referred to clothes stuffed with plenty of bran (or other uncomfortable, heavy stuffing); today, the term usually describes somebody filled with hot air, meaning a lot of talk and not a lot of substance. 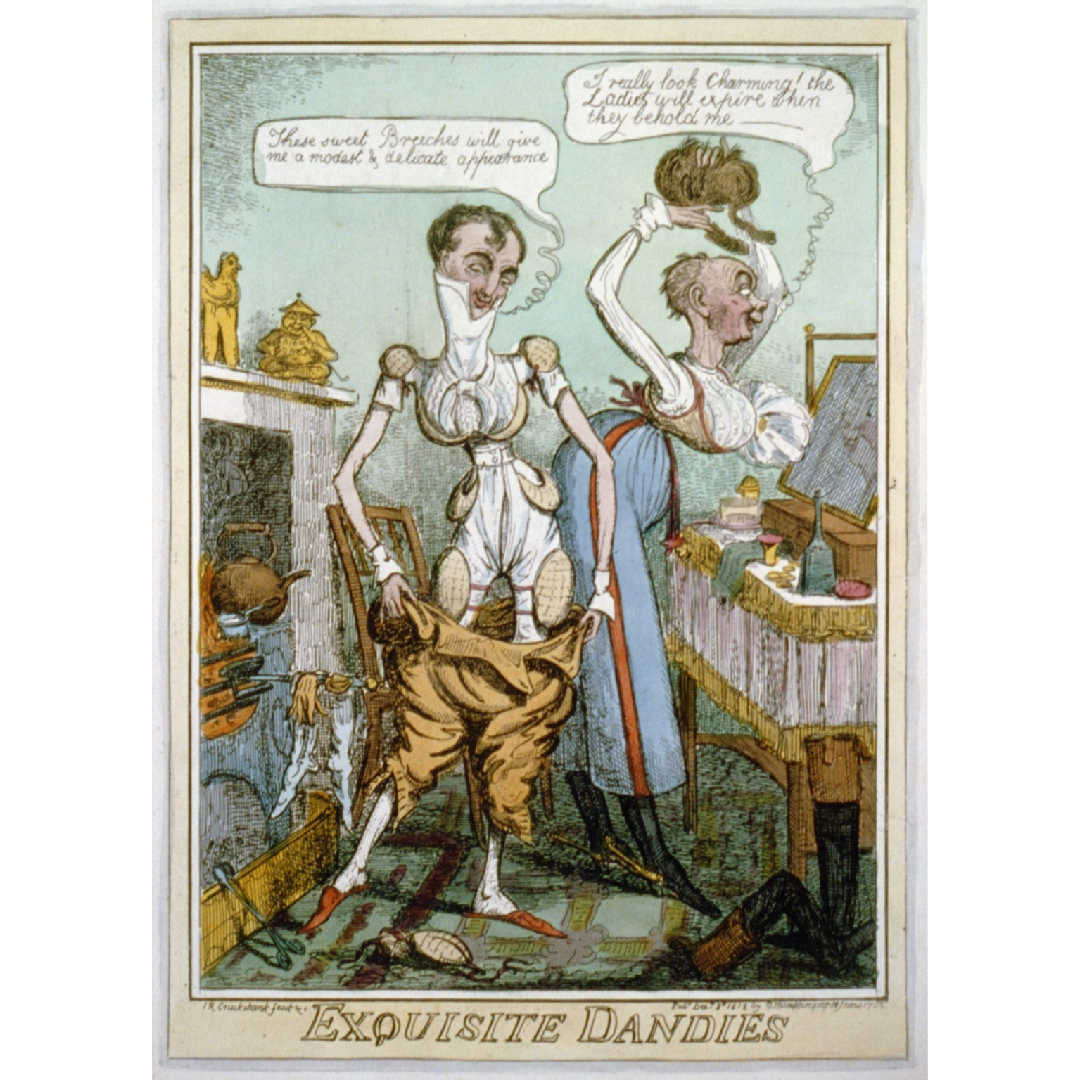 An editorial cartoon depicting two "dandies" getting dressed. Notice the cinched waists and padding. Cartoon by Isaac Robert Cruikshank from 1818.

Eventually, the stuffing kind of bombast went out of fashion in the mid-17th century, but during the Regency Era, men continued to stuff their clothes in order to achieve the ideal silhouette. In that case, though, the stuffing was primarily in the pants—specifically the calves. (By then, heels were out of fashion for men.) As can be seen in the accompanying editorial cartoon, some men would also pad their shoulders, legs, and hips, and, if needed, wear a sort of girdle known as a “stay.” I imagine the famous “lake scene” in the 1995 BBC version of Pride and Prejudice would have been less revered had Colin Firth’s Darcy been shown removing calf padding and a girdle before diving in.