Beyond the Loom: Tools and Equipment

Everyone knows you need a loom to weave, but what are the other essentials a weaver needs?

I was going through some old posts and found an excerpt from an article that originally ran in Handwoven November/December 2004 about what equipment you need to weave other than a loom. Here is the excerpt with a few modifications and some added photos of some of the equipment Madelyn is describing. That issue is about warping and I highly recommend it, if you have warping questions!

The projects in Handwoven require all sorts of equipment beyond the loom. It’s always hard for new weavers to know how to set priorities for what to buy—especially since weaving equipment is expensive. (I don’t mean that it costs more than it should,but if you compare the cost of a loom with the cost of knitting needles. . . .)

So, what do you really need? Everyone knows you need a loom, but there are many other accessories to consider. You’ll want to have at least 100 heddles on each shaft—the wider the warp and the finer the threads, the more heddles you’ll need. Your loom probably came with a reed. Different projects require different reed sizes, but you can often achieve the suggested setts with other reeds. (The Weaver’s Companion, Interweave Press, 2001, pages 14–15, explains how to do this. There are also many versions on line if you search for weaving reed substitution chart) To start, it’s good to have a 10-dent and a 12-dent reed (and an 8-dent reed if you plan to use thicker yarns). 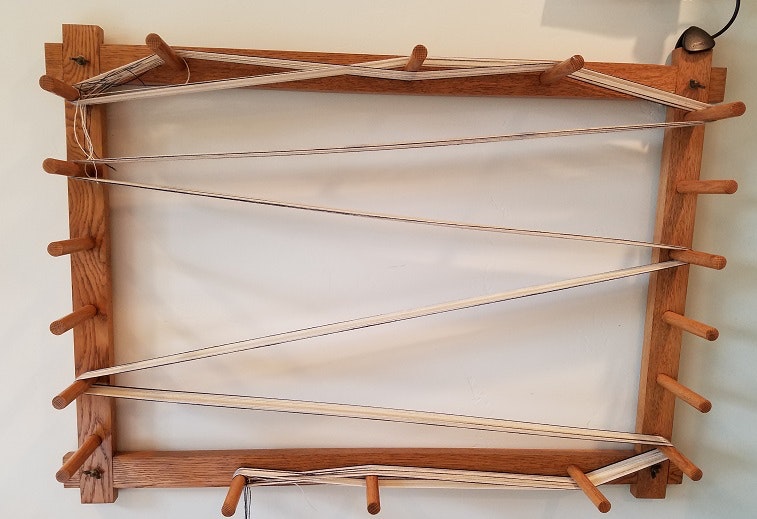 Without an efficient way to wind a warp such as with a warping board or reel, you won't get far in weaving. Photo by Susan E. Horton

You won’t be able to weave long without a warping board (or reel)—doorknobs are not a satisfactory substitute. Choose a warping board with sturdy, thick pegs that are solidly fixed in the frame. To warp from back to front, you’ll need a raddle. That’s a board with pegs or nails that separate the warp into groups as it’s wound on the beam. A 1⁄2"-dent raddle is more useful than one with bigger spaces (See this article about warping from back to front, for more about using a raddle). Lease sticks are also necessary if you warp from back to front—smooth flat sticks with slightly rounded edges or smooth dowels work well. 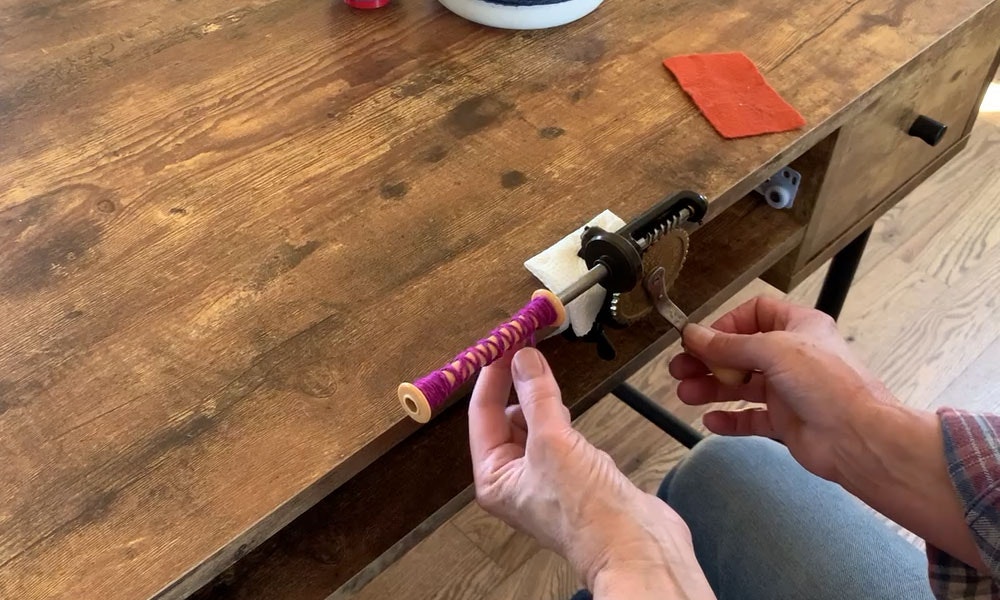 Bobbin winders speed up the process of winding a bobbin and create well-wound bobbins that are a joy to weave with.

You should have at least two boat shuttles with a minimum of a dozen bobbins and at least two stick shuttles (start with a length of about 12"). For faster and more joyful weaving, use a boat shuttle for all yarns thin enough to wind efficiently on a bobbin. A bobbin winder is a must. Electric ones are very nice but not essential. (Put one on your holiday gift list.) A loom bench that can be adjusted to the right height is better than trying to weave from a chair or stool. It’s also handy to have the bench space beside you for placing shuttles and scissors. You’ll need an umbrella swift if you use yarn that comes in skeins You can wind a warp on the warping board directly from the swift or you can wind yarn from the swift into a ball. Ball and cone winders are available, but they do not need to be at the top of your priority list.

That's Madelyn's list. Here are a few other things I find handy to have in my studio: a fringe twister for quickly and evenly twisting fringe, temples for maintaining weaving width on the loom, cone holders to keep my cones upright as I wind my warp, weights for floating selvedges and loose warp ends, and since it didn't come up before, lots of pairs of scissors and measuring devices of all types! ~Susan