Working Out a Weaving Obsession

I’ve noticed that many weavers have favorite weave structures that they revisit again and again. I believe some of them are working out a design problem that their brain won’t let go of. I understand that feeling. I, too, get stuck on certain ideas and have to work them out as I design and weave. Once I figure out the solution and see the results, then I'm released from that obsession, and I can move on.

In 2018, I participated in the Handweavers Guild of America’s Towel Exchange at Convergence in Reno, Nevada. Participating meant weaving 5 towels of a specific size and taking them to exchange for 5 towels woven by other participants. Believe me, I didn’t need any more handwoven towels, but they are my happy pleasure.

For my Stash-Busting Exchange Towels, I used a draft from Winning Towels by Karen Tenney as my guide. I designed randomly spaced raised twill stripes with plain-weave stripes in the reed and then (tediously!) recorded them in a draft. They were great stash busters; I used 9 colors of 8/2 cotton. I loved those towels and was sorry I hadn’t woven 6 so that I would have one after the exchange. In case you would like to weave similar ones, here is a free download of the pattern.

I thought I was done with the idea of raised twill stripes on a plain-weave background until one day as I was smoothing out a tablecloth, I noticed that it had plain-weave stripes with raised twill, but the colors were arranged differently, and the pattern repeated. Some of the colored stripes were both twill and plain weave, adding yet another dimension. At the time, I was planning to weave some napkins using 10/2 cotton following basically the same recipe as the towels, but this tablecloth made me rethink my design. 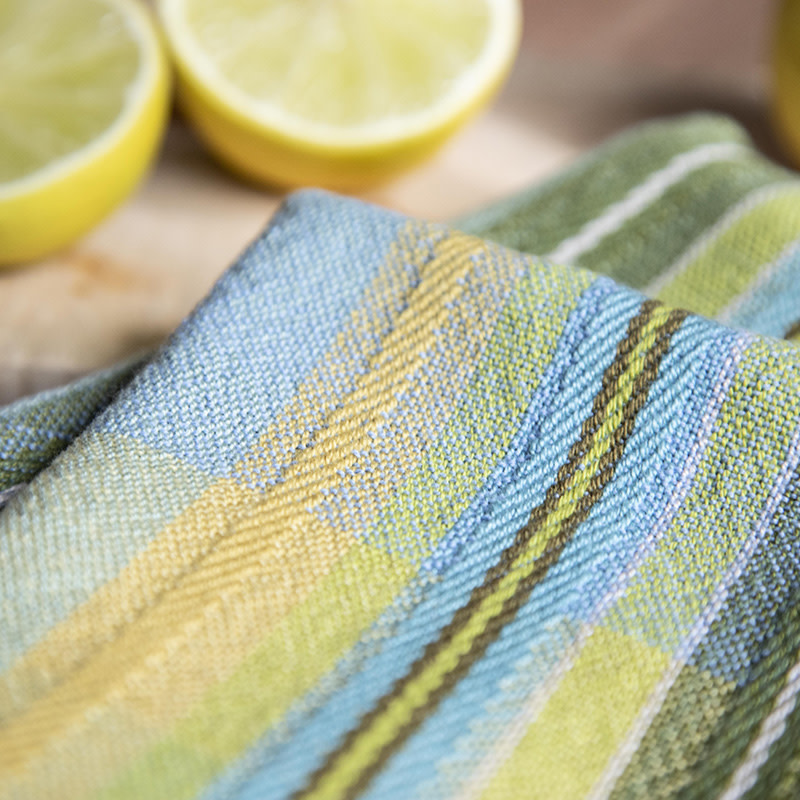 I think I'm finally ready to let go of the idea of raised twill in a plain-weave background. On to my next weaving obsession.