What Is Advanced Tablet Weaving?

The notion of advanced tablet weaving has always made me a bit squeamish. In the post below, tablet weaver extraordinaire John Mullarkey dispels the myths surrounding “advanced” card weaving and shows us that advanced doesn’t always mean difficult. 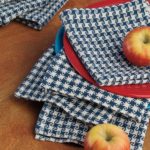 I tend to view myself as a beginning weaver--if I’m feeling generous I might go so far as to say advanced beginner. I can read a draft, thread a loom without problems (usually), and I’m actually rather good at keeping track of my treadling, but I know that in my six years of weaving I have barely scratched the surface of all there is to know. I had a set of color-and-weave pinwheel napkins published in the May/June 2014 issue of _Handwoven. I felt the napkins were fairly simple: easy to warp and simple to treadle. Lo and behold, after they published, several extremely talented weavers--weavers who have woven for many years longer than me and whom I admire--sent me emails saying how much they liked my napkins and that it inspired them to get the courage to try a 2-shuttle weave. I had no idea that a 2-shuttle weave was difficult (it really wasn’t!) and so I approached the project as one appropriate for a beginner such as myself._

This made me muse about the notions of advanced and beginner weaving--what to me was a simple and straightforward technique made others nervous. Similarly, the notion of advanced tablet weaving has always made me a bit squeamish. In the post below, tablet weaver extraordinaire John Mullarkey dispels the myths surrounding “advanced” card weaving and shows us that advanced doesn’t always mean difficult.

I don’t believe there are advanced techniques and beginner techniques in tablet weaving. There are just different techniques.

If you know how to warp the cards, turn the cards, and throw the shuttle, you are card weaving. But here is why some believe there is advanced card weaving: each technique has its own rules for reading the draft for setup and turning. Does each row on that graph represent one turn, two turns, or four turns? Does each column of that draft represent one card or more? Do I need to be concerned about the letters on the cards for this technique or not? Which pack is turning which direction and what does that pack represent? Here are some examples:

Threaded-in card weaving requires very specific threads be in a very specific order for the pattern to work. The turning for threaded-in bands is very simple. All cards get turned four times forward, and four times back. Very easy treadling system. So many believe this is a beginner card weaving technique. But let me tell you, it requires a very difficult warping process. You have to pay attention to the color of each and every thread for each hole of every card, and which direction through the card that thread goes. Not so beginner now, is it?

3/1 Broken Twill double-faced bands require you to turn each card a different direction each and every pick following a chart exactly. That sounds fairly advanced. But guess what, warping is a cinch! Every card has 2 light and 2 dark threads. Using the circular warping method I can warp 20 cards in 10 minutes. And that chart? Once you learn how to read it, it gives you a complete map of every card turn in that band, so fixing a mistake is easy. Just follow the map back until you find the wrong turn. 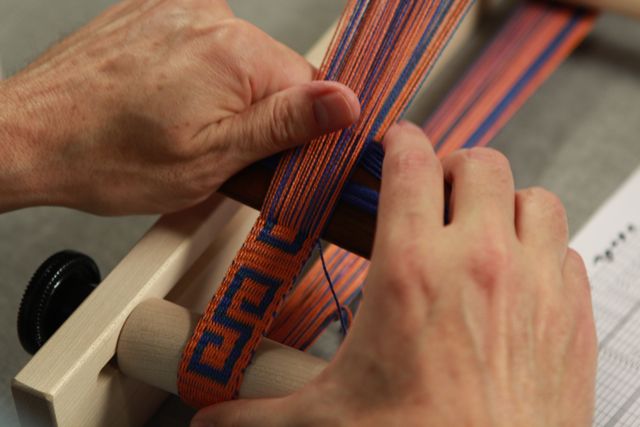 Whether you're a beginner or advanced weaver, you're bound to have a rewarding experience with tablet weaving!

Egyptian Diagonals is one of my all-time favorite techniques. Double card, double turn diagonals. Is it an advanced or a beginner’s technique? Well that depends. With two simple rules I can tell you how to do free-form diagonal patterns that are beautiful and don’t require you to follow any charts at all. Or it can be as complicated as weaving diagonal transitions under strict rules and documenting what you’ve done so you can replicate it later.

Here’s what I tell my students about what the distinctions between beginner and advanced card weavers are. And here’s a clue, it isn’t based on any technique. Beginning card weavers never fix mistakes - they just weave through them. Advanced card weavers unweave mistakes, and let me tell you, unweaving mistakes in card weaving is a science unto itself! And master card weavers…never make mistakes!

So if there is a card weaving technique out there you’ve been wanting to try, but you weren’t sure you were good enough or experienced enough, throw those misconceptions aside, and dive right in.