Mid-Century Modern meets textiles in the latest issue of Handwoven.

Looking back in time, we see that the difficult years of the Depression and World War II brought about innovation, optimism, and forward-thinking in designers of the mid-century era. The movement of Mid-Century Modern was all about creating the perfect balance between form and function. Good design was engineered to be functional yet aesthetically pleasing and affordable to the masses.

The Tramway Gas Station was built in 1965 by Albert Frey and Robson Chambers. This unique building, with its hyperbolic paraboloid roof, now serves as the Palm Springs Visitors Center and is just one of the many iconic Mid-Century Modern buildings in the town. Photo credit: Lindsay Jarvis

As a full-time resident in the Palm Springs area—considered by many the Mid-Century Modern Mecca of the world—I get to see incredible mid-century architecture and design every time I step out of my own 1964 condo. We often associate the Modernist movement with home design, but Mid-Century Modern can encompass everything from home décor to small appliances to the textiles used to adorn each room.

I was delighted to hear that the March/April 2021 issue of Handwoven would be all about Mid-Century Modern flair, highlighting designs with bold shapes and vivid colors, and even a couture weaver from the era. The “Bauhaus Weaver Hand Towels” on page 50 are a gorgeous example of color theory and simplicity embodied by the Bauhaus movement. But what is this design theory and how is it related to Mid-Century Modern?

BAUHAUS
In 1919, Walter Gropius founded the Bauhaus school of design. During a time when fanciful and ornate styles such as Art Deco and Art Nouveau were all the rage, Bauhaus stood in stark contrast with its principles rooted in simple yet well-thought-out design. While Art Deco and Art Nouveau featured opulent curves and floral motifs, Bauhaus featured strong geometric angles and minimalism. The school emphasized “form follows function,” meaning that each element of a design was there for a reason. A thorough understanding of color theory, materials, and construction was necessary. Efficiency and simplicity were key. Bauhaus was a precursor to the Modernist movement’s International style and, eventually, Mid-Century Modern.

A Vest for Anni by Judith Shangold from the March/April 2021 issue of Handwoven. Photo credit: Matt Graves

While the Bauhaus school did allow women to attend (something rather unusual at the time), they were often assigned to the weaving workshop. Talented weavers at the school such as Anni Albers, Gunta Stölzl, and Otti Berger brought innovative Bauhuas principles to their textiles, not only influencing the future of design but the future of women in the workforce. In this issue of Handwoven, Anni Albers receives tribute via the striking “A Vest for Anni” project, featuring a minimal design and natural materials.

MORE WOMEN OF WEAVING
The Bauhaus weavers brought textile and interior-design arts into the next era of style, paving the way for more women weavers, more innovation, and even a couture creator. Whether or not you’ve heard of Ebba von Eckermann, you’ll be engrossed by her incredible story. Ebba was born a countess in 1921 in Stockholm. She had high-end design in her bones, thanks to growing up amid her mother’s fine-tailoring atelier. Moving to the countryside couldn’t keep couture away from this weaver. What started as a small-town blanket-weaving operation ended up with Ebba traveling across the United States—eventually known as the “weaving countess”—being featured in a 1950 issue of Vogue, and selling a skirt design to Dior. Writer and weaver Miriam Parkman shares Ebba’s story, along with their very special in-person chat in 2016.

INCORPORATING MCM TEXTILES INTO YOUR HOME
There are many levels and styles of Mid-Century Modern décor, ranging from 100 percent vintage to reproductions and everything in between. A fun and easy way to incorporate the look into your home is using color palettes from the time period as well as bold geometric shapes.

The orange and turquoise color scheme in the “Vintage-Style Table Runner” is a nod to the 1960s, when both hues were popular for home décor and clothing. The geometric design and fringe add even more MCM flair. The vibrant orange and blues pair again in “Mid-Century Shadows,” a 1970s pattern that was given a breath of fresh air with the vibrant color combination. The “Retro Chain Scarf” shows another example of the palette, this time blended with subtle gray.

What mod home is complete without a swanky cocktail area? The “Mid-Mod Coasters” will add a pop of color to your home bar and are a great stash-busting project, too! Striking repeats and color blocks combine with a retro color palette in the “Vermilion Cliffs” table runner, while rectangular repeats and bold colors take center stage in the “Modern Rep Bath Mats.”

INSPIRATION
Do you have fond memories of your childhood home? Bring the inspiration to your craft! Sarah Fortin, creator of the “Doubleweave Designs” scarf, shares that she pulls inspiration from her grandparents’ 1960 home, complete with oak floors and a galley kitchen, and her parents’ 1956 home with an all-mahogany interior. 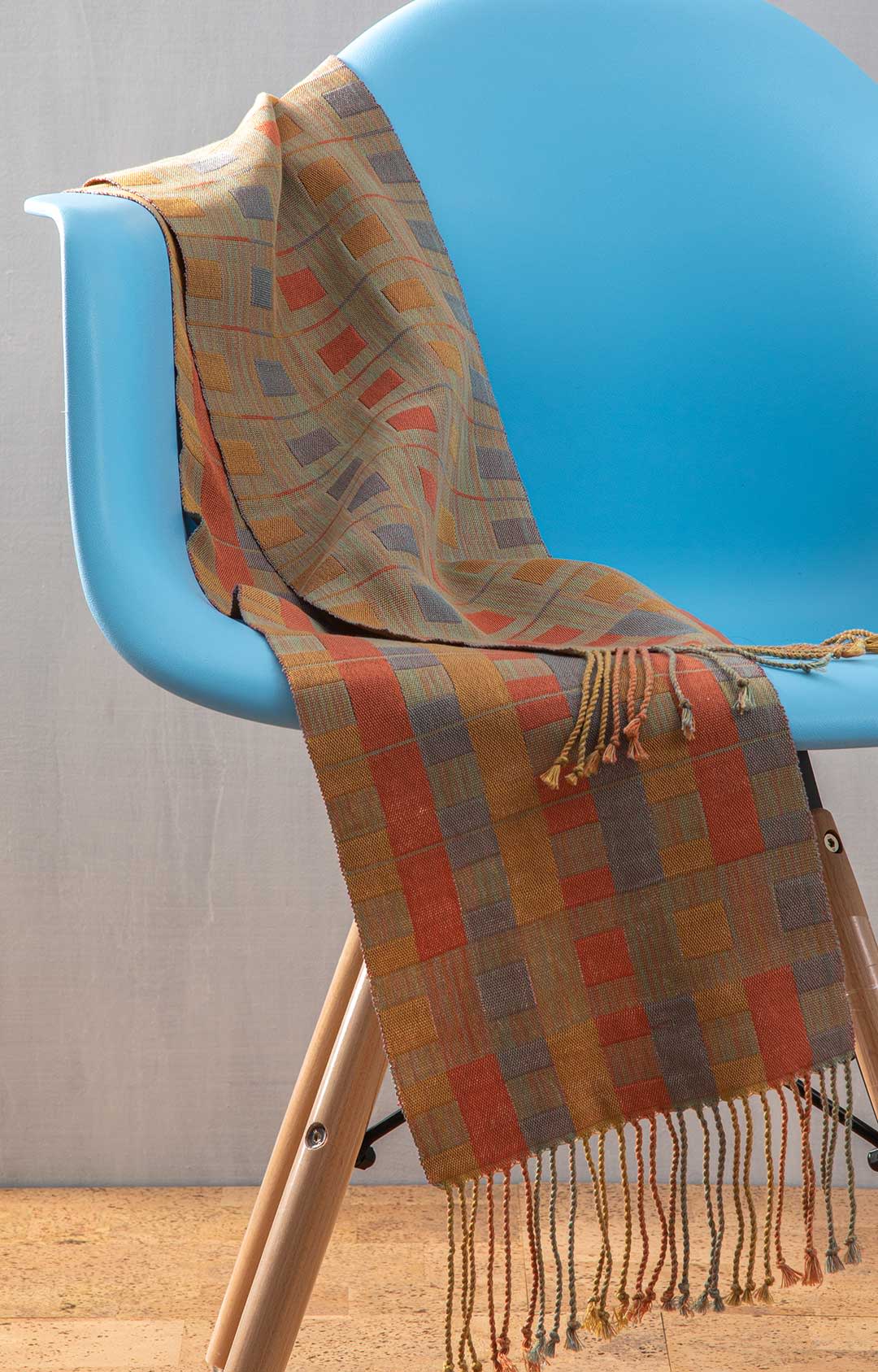 Space exploration and “atomic” style were huge influences on design in the 1950s and 1960s. With its shag-type appearance, the “Crater Rug in Double Corduroy” is reminiscent of what you might have found in homes during those decades. The design is based off of “a crater photographed from space by the NASA Juno space probe.”

Perhaps you have a certain piece of décor in mind for re-upholstery. Sharon Adlerman’s “Swatch Collection” features fabric fit for a mid-century home, with two of the textiles designed specifically with the wing chair in mind. There are many different adaptations of the classic wing chair, but Hans Wegner’s 1960 wing chair silhouette is a gorgeous example of form following function.

REPRODUCTION
Sometimes, a “nod” to the past just won’t cut it. For the owners of a historic 1960 home, the décor needed to stay as close as possible to the original. Unable to find a similar set of draperies that had been damaged in a flood, the owners commissioned Deanna Deeds to re-create the unique leno fabric. The finished product was a success and involved more than 100 yards of fabric for luxurious floor-to-ceiling windows. A smaller version of the project is presented in this issue, “Leno Casement Curtains for an MCM Home,” and is suitable for window curtains.

Lindsay Jarvis is a regular contributing writer for Atomic Ranch Magazine. She lives near Palm Springs, California, where she can often be found hunting for vintage treasures and walking her two rescue dogs.