My introduction to floor loom weaving was a week with Madelyn van der Hoogt at The Weaver’s School. It was a bit like drinking from a fire hose, as I was probably the only person in the class who had never touched a floor loom before. We learned a lot of weaves that week, and while I loved all of them, I would have been hard-pressed to explain some of them until I got home and went back over my samples and drafts. One that did stick in my head was summer and winter. 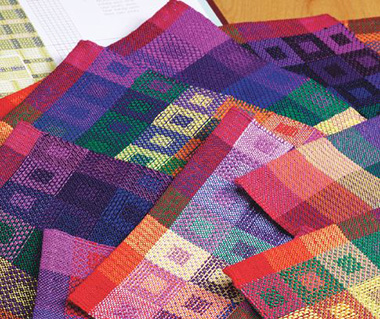 Summer and winter is a tied unit weave--tied meaning that there are warp ends whose job it is to tie down pattern floats, and unit meaning that each thread group or “unit” can interlace, independent of the units around it, in one of two ways, producing either pattern or background. I pretty quickly grasped the advantages of a tied weave: I could make a pattern area as wide as I desired because the tie-down threads prevent long floats. I liked that the cloth was reversible. (Hence the name: you use contracting colors for pattern and ground weft, so there is a predominantly light (“summer”) side and a predominantly dark (“winter”) side. I was also enchanted with the fact that the tie-down treadles in summer and winter can be used in several different ways, producing a pattern within the pattern, tiny x’s, o’s, squares, or what’s called a dukagang treadling that produces subtle stripes. I’m one of those weavers who loves to design, warp, and weave the first 6 inches of a project. Then I'm ready to move on unless I can play with pattern at the loom, so summer and winter, with its play possibilities was one of my first loves.

As with any good relationship, after the rush of infatuation, I have continued to discover new things to love about summer and winter. As a beginning weaver (and one who learned on 8-shaft looms) I didn’t understand the power of a weave structure that needs only one shaft per pattern block. Many traditional designs use only 2 blocks, so you can weave them with summer and winter, and, of course, you can make up your own designs. With 8 shafts, you can weave 6 blocks! Oh, the possibilities!

The other thing I didn’t realize about summer and winter is how it lends itself to color play. My first samples used a black ground warp and weft and a bright-colored pattern weft, which was lovely, but I have learned from years of projects in Handwoven that this weave structure has its own love affair with color. You can vary the warp colors, the pattern, and the background weft colors to produce subtle interactions--visual blending can create more colors than exist in the threads themselves. You can also use summer and winter threading to weave what’s called “summer and winter polychrome” (taquete), with fabulous results.

This fall, I returned to the scene of my first “date” with summer and winter, The Weaver’s School, to produce a video on summer and winter with Madelyn van der Hoogt. Not only does it give a thorough introduction to designing and weaving this many-splendored structure, the video also includes a Best of Handwoven eBook with eleven projects you can use to create lovely textiles for your home and to wear. I predict that, once you try it, you, too, will be on your way to a new romance.