Mayan women say that the goddess Ixchel taught their people to weave at the dawn of time. Through millennia of struggle between rival groups, through the founding of a dynasty that ruled in Quauhtemallan in the fifteenth century, through the coming of the Spanish, they wove to clothe themselves in the beautiful huipiles (blouses) and cortes (skirts) that told the stories of their families and communities. Now weaving is bringing new hope after modern struggles.

As the armed conflict raged in Guatemala from 1960 to 1996, tearing apart families and widowing the women, Mayan women wove on. Then in 2005, mudslides from Hurricane Stan destroyed the coastal communities of Pacutama and Chuicutama. The residents had to flee from their farmlands and climb to almost 10,000 feet above sea level to resettle in the highlands of Santa Catarina Ixtahuacan, an area known locally as “Little Alaska” because of its cold climate. For these communities and for others affected by decades of civil war, weaving is now not only for clothing but for feeding their families, and it is building a better future through an organization named Y’abal. 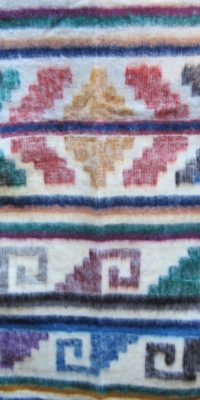 Detail of one of the Alvarados' lovely wool blankets. Photo by Anita Osterhaug.

In the Mayan’s native K’iche’, the word y’abal means “hope,” and that is what these weavers now have. The social enterprise, founded by a Belgian woman living in Guatemala, first brought food, medicine, and temporary housing to the displaced communities in the aftermath of Hurricane Stan. But having lost the land where they had made a living growing coffee and bananas, what the people really needed were jobs, so Y’abal worked with them to turn their weaving tradition into a business. They perfected designs around the nature-based traditions of the Nahuala region where they now live but using contemporary materials to create fashion fabrics, accessories, and home decor that would sell to more affluent Guatemalans and visitors and through fair-trade stores around the world.

Since 2005, Y’abal has added two more communities, Chuacruz, where a cooperative of weavers, many widowed by the armed conflict, support their families by weaving scarves and shawls on their backstrap looms, and Momostenango, where the Alvarado family weaves blankets and carpets from local wool on simple floor looms. The women from Chuacruz use the traditional jaspe (ikat) dye technique in their products, tying sections of warp to create resist patterns before dip-dyeing. The family in Momostenango dyes their yarn with local natural dyestuffs, some gathered from their own property.

Y’abal opened its own store in Quetzaltenango, Guatemala, in 2010. The city, known locally as “Xela” (pronounced “shay-la”) is a center for language schools, so it brings in an international population of students and business people who appreciate the Y’abal products. (You can find the store at www.yabalhandicrafts.com.)

In addition to providing each weaver a living wage, Y’abal has been able to help the women in its cooperatives develop other marketable skills. The organization paid for several women to take sewing classes and develop their tailoring skills so they can make the handwoven cloth into bags, backpacks, neckties, and other items that fetch a higher price. This year, the women will also attend a sewing machine repair course, critical in Nahuala where there is no “vac and sew” shop around the corner, and a few young men have also joined the sewing courses. The women attend entrepreneurship workshops each month to learn small business skills—everything from budgeting and pricing to new product development and craft skills to extend their product lines. The cooperatives now do quality control, set prices for their own products, and provide maternity leave for their members, relieving women from the stress of backstrap weaving right after birth.

Y’abal has also provided microloans to more than thirty families to start businesses or to rent or buy farmland, and director Allison Havens says that not one family has failed to pay back its loan in full.