Early American coverlets are a key part of weaving history. Learn why they were so important to American colonial households and how they were made here!

Here's Marilynn Cowgill to dive into the world of colonial American coverlets. They were an important part of any household at that time, and a key part of weaving history! ~Andrea

"Imagine this: You are a woman in the late 18th century. Your husband is a farmer, and he depends on you to run the household. Among your myriad duties is making all the textiles and clothing for the family, including coverlets for the beds. While a few households were wealthy enough to purchase coverlets from professional weavers, many were woven by women for their own households. It was an amazing feat, so what a gift that some of these coverlets have survived for us to cherish and study.

Early American coverlets were typically woven in two panels to fit on householders’ narrow looms, and then seamed down the middle. Britain forbade cotton production in colonial America, and British-produced cotton was expensive, so coverlets were woven with either millspun cotton (if the weaver could afford it) or linen for strength plus wool for warmth. The wool was typically handspun and dyed with indigo and madder. After American independence and the rise of the American cotton industry, cotton largely replaced linen as a coverlet material. 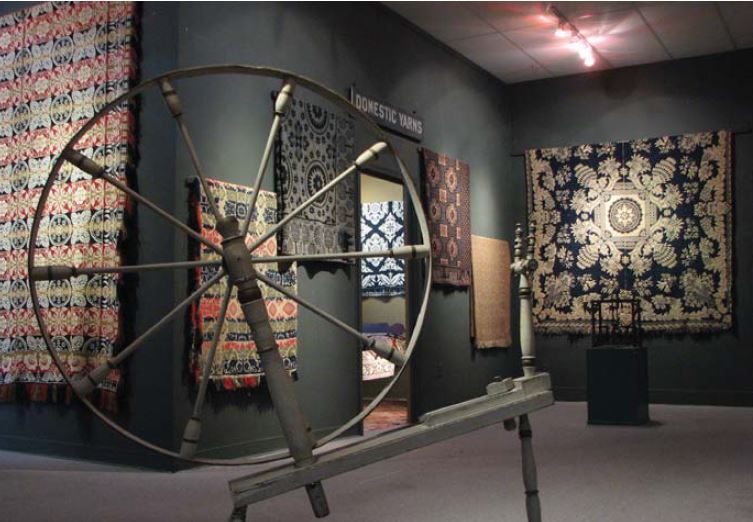 Figured and fancy coverlets on display at the National Museum of the American Coverlet.

According to the National Museum of the American Coverlet, there were two main types of Early American coverlets: geometric and what was called “figured and fancy.” The geometric coverlets were often woven in overshot, which allows up to four blocks of pattern on a simple 4-shaft loom, and could be woven by either home or professional weavers. The figured and fancy coverlets included floral, animal, and other motifs. These were woven by professional weavers on looms equipped with a Jacquard head, which used a punch-card lifting system."

You can read more weaving history and see other historical American coverlets in the September/October 2016 issue of Handwoven. ~Andrea