A Weaver’s Guide to Effective Procrastination

In her article from the September/October 1995 issue of Handwoven, Linda muses on procrastination and how she makes it work for her.

If you love to make gifts for others but struggle with actually finishing them, Linda Ligon has a (sort of) solution for you. In her article from the September/October 1995 issue of Handwoven, Linda muses on procrastination and how she makes it work for her. —Christina

I can’t find the word "crastinate" in Webster's, but whatever its precise meaning, I'm in favor of it. You could call me a pro, in fact. I've crastinated actively and skillfully in almost everything I've ever undertaken: homework, housecleaning, weeding, writing my regular magazine columns, even spinning and weaving.

I love making things for friends and relatives. It's a special way of keeping people in mind, especially if I'm anxious about them. I remember long, long nights knitting a complicated cable sweater for my daughter when she was traveling in Eastern Europe and Africa, not available by phone for weeks on end. I'm sure those stitches kept her safe. I remember spending weekends weaving afghans and other useless items for my son when he went far away to school in a big city. He didn't get mugged (except once), and he graduated, so that's proof that my strategy worked. The reality is that, though people seem to enjoy receiving the things I make, the process probably means more to me than the object does to them. 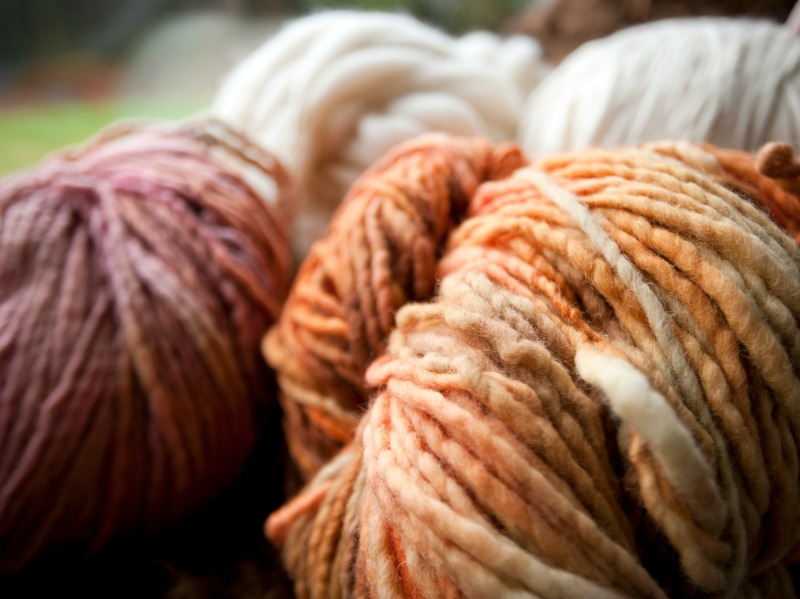 Do you have the yarn but haven’t made the gift? Linda suggests giving the gift of yarn with a promise of a future present. It’s like two gifts in one!

I started applying my penchant for procrastination to my love of making gifts a few years ago. One of my coworkers was going to have a baby, and I wanted to spin and knit a little cap for it. By the time her shower came around, I had only got the spinning done. So I gave her the yarn with the understanding that she would return it to me and receive a finished cap soon. The "soon" ended up being when the baby was about three months old. The effect was that she got two gifts!

Another time, I spun several small batches of space-dyed silk top just for fun. As you may well know, there's not much you can do with randomly colored silk yarn that's not homely or at best surprising, so I gave each batch away with the promise that, if it were returned to me, it would find its way into a scarf for the donee. (That way I could put off having to figure out how to use it.) The most recent such magnanimous offering was made to a colleague in celebration of ten years of working together; eight months later, he's getting the scarf, with the silk as an accent yarn against a solid ground, and it looks okay. The gift that keeps giving (only not right away).

There are lots of ways to spin this process out even further. One year, I gave my son for his birthday a lovely black fleece, washed, carded, and dyed a dark charcoal green. For Christmas, he got a sweater's worth of yarn spun from the fleece. Next birthday, a sweater! Which didn't fit! By the time I had ripped out the bottom ribbing, lengthened it, put gussets under the arms, and gift-wrapped it yet again, it was time for another birthday. Four gifts from one project. It's the thought that counts.

I admit it's a racket, and I can't imagine why I'm sharing this personal nonsense with you. The fact is, I'm three baby caps and two silk scarves behind at this point and feeling a little panicked. I've never believed in buying things on layaway or running up my credit cards or going into debt. Yet here I am dealing in handmade gift futures.

An alternative, I suppose, would be to just give away the raw material and be done with it. I had a great-aunt who used to give me yardage for Christmas. It shifted the burden of procrastination to me; I don't think I ever did get around to making anything out of those odd lots, but every time I looked in my sewing basket, I remembered her. I won't say how.