Turn the overshot draft so a section of the overshot pattern became two supplemental warp stripes running the length of the scarf.

After decades of spinning and weaving, I have an almost embarrassing wealth of yarn and spinning fibers in my stash. Most of the yarns are the workhorses of weaving—lots of sizes and colors of cotton and wool plus tubs of Tencel and bamboo. I also have a healthy supply of handspun skeins waiting for their turn in a project. Thus, whenever I go to a yarn shop or the “candy section” (aka vendors) at conferences or fiber festivals, my practical side sternly tells my creative side: “You do not need any more yarn or spinning fiber! You must use what you have. Be strong!”

But my creative side is very persuasive: “Ooooooooo, exotic fibers! Just buy a little. It will be so pretty spun up.” This is usually followed by: “Well, look at that beautiful handpainted yarn, and it’s such a wonderful fiber combination, and it feels so luscious! Just a little . . . ” So I have an abundance of 1- or 2-ounce skeins of buffalo, yak, silk, qiviut, cashmere, camel, etc. And some guilt— after all, there is only so long I can take these yarns and fibers out to admire before my practical Scandinavian and German genes start scolding me about indulging my champagne tastes on a craft beer budget. (Sometimes it gets very noisy in my brain.)

These purchases are tiny treasures. I could combine several into a project of size, but I like to let these marvelous fibers take center stage. That’s where supplemental warps come to my rescue. I only need a little yarn to make a supplemental overshot or monk’s belt design run the length of a scarf or a shawl. Guilt, be gone!

SUPPLEMENTAL WARP TO THE RESCUE! 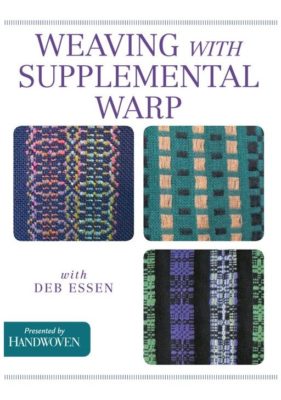 A few years ago, I decided to make an overshot name-draft scarf for my mother’s 80th birthday. I lusted over Mountain Colors Jeannette cashmere/ silk knitting yarn. I love my mom, but I nearly croaked at the price of the four skeins I’d need to use it as pattern weft in the overshot scarf. My solution: turn the overshot draft so a section of the overshot pattern became two supplemental warp stripes running the length of the scarf and use a less expensive yarn for the base fabric. I needed only one skein of the cashmere/silk—budget friendly and the fancy yarn got to take center stage!

Supplemental warps also saved the day when a wildlife biologist friend, Pat, gave me a skein of wolf-down yarn from her pet, Koani. As a pup, Koani was in a documentary on wolves that Pat consulted on. When the filming finished, Koani was habituated to humans, and the choices were to euthanize her or send her to a zoo. Instead, Pat adopted Koani and made her an ambassador wolf, educating children and adults about her species. Over Koani’s 16-year life, Pat saved the underdown she brushed out of Koani’s coat. When Koani died, Pat had the underdown blended with merino wool from a friend’s sheep and spun into yarn. I talked to that 200-yard skein of Koani yarn for a long time. I knew the canine fiber would bloom into a fuzzy halo with handling and washing, so I rejected many weaving designs. But a simple supplemental warp in monk’s belt was just the ticket, with a Jagger- Spun Zephyr wool/silk base cloth. What a treasure this scarf is.

Long story short, supplemental warps let the treasures in my stash come out and perform center stage in beautiful textiles. I’ve even started playing with Kreinik metallic threads (usually used in needlepoint) to add a touch of bling. So indulge yourself with even one special skein. A supplemental warp design will let that fancy yarn shine without breaking your budget or driving you into therapy.

Check out Deb's videos and her book!