Using a “Yarn Lab“ as a Starting Point

Having a place to start helps when planning a project. In this case, a “Yarn Lab“ gave me a head start.

Blue and white cotton mixed with stonewashed blue cotton in a striped warp. All photos by Susan E. Horton

The “Yarn Lab“ by Jenny Sennott in Handwoven March/April 2021 featured some new 5/2 Stonewashed Cottons that WEBS sells. In particular, I liked what Jenny said about the plain-weave cloth she wove: “It looks and feels like good honest cloth….” Her samples were beautiful, so I checked out the Stonewashed Cotton colorways and the blues in particular. To me, the stonewashed blues look a bit like used indigo cloth, in a good way.

I’ve been wanting to weave pretty but simple placemats that would work both for national holidays and for make-your-own-sushi nights when I want a Japanese-style table. For me, placemats should lie flat, require little if any ironing, and be fully machine washable and dryable. I decided to sample using the Royal Blue Stonewashed Cotton with what I considered its companion colors, white and solid Royal Blue. For simplicity, I decided on stripes in plain weave.

To sample I wound a 1-1/2 yard warp of 144 ends. I warped 6 stripe patterns, each 24 ends wide using slightly different color proportions with the goal of seeing how the colors reacted with each other. For instance, a thin dark blue stripe within a field of stonewash might look very different from a thin stripe of stonewash in a field of dark blue. I followed Jenny’s lead and sett the first sample at 20 epi. I wove using the same cottons for weft, and then cut off but preserved the threading for the next sample. For the second sample, I resleyed with 2 ends per dent in a 12-dent reed for an epi of 24. I wove with the same weft but then toward the end, switched to a 4/4 white cotton (800 yd/lb) from my stash. I liked what I saw on the loom so I added some thin picks of weft between the thick cotton picks as an experiment before cutting off again. 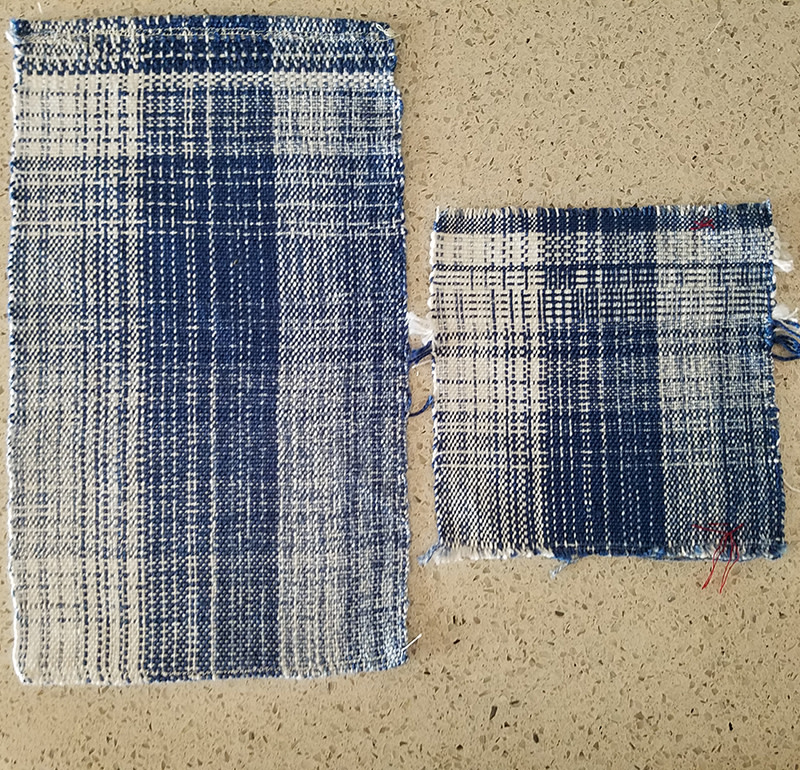 Off the loom and washed, the first two samples were great, but there was warp left to weave so I continued to sample using both the 5/2 and the 4/4 cottons alone and together. Sample #3 was sett at 32 epi, and sample #4, at 40 epi. I briefly considered going even tighter as in 48 epi, but after washing the last two samples, I knew I had hit my target. 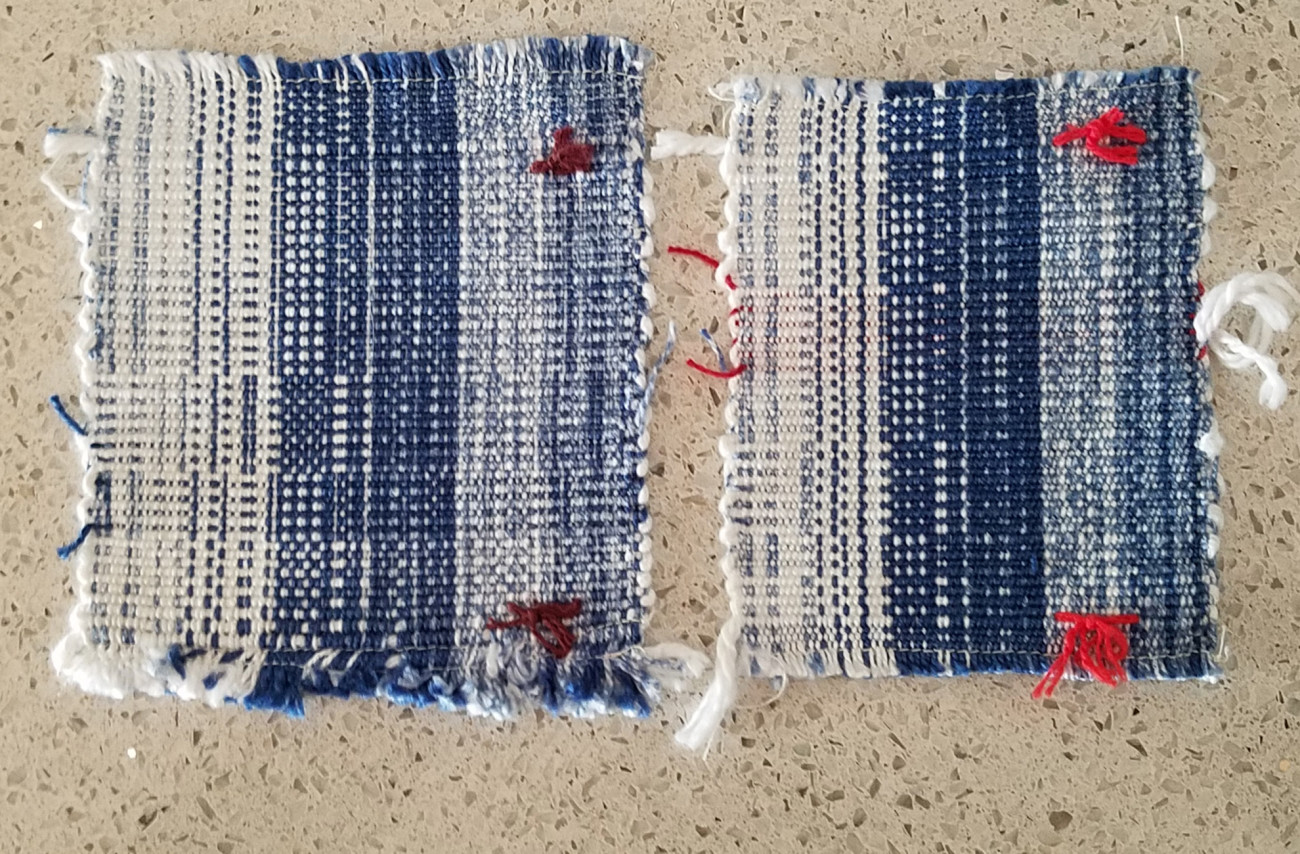 Samples #3 and #4. Before cutting off the loom, I wove in small pieces of red thread. To determine shrinkage and take-up, I measured the distance between the red threads on the loom, off the loom, and wet-finished. That helped in planning my project's warp length.

Sample #1 was exactly as Jenny described it. The yarn woven at 20 epi and 16 ppi yields a fabric that is strong yet still soft. Sample #2, sett at 24 epi, was a bit stiff and felt like canvas. It would be great for something like a bag but isn’t quite thick enough for the placemats I envision. In making my final decision, I went back and forth between #3 and #4, but in the end, I chose #4 woven Rep style with thick and thin picks. It’s tight and thick but the white weft still peeks through a little, adding to the solid blue areas a casual touch that works with my aesthetic.

Last weekend I finished threading and sleying 544 ends for the placemats, as you can see in the top image. I plan to weave 8 placemats and a runner. In a future post, I’ll let you know how it goes.

P.S. Just for fun, check this out. Here is the 20 epi sample next to the 40 epi sample. If you didn‘t know they were woven on the same warp, you probably wouldn‘t have guessed! Sett changes things. 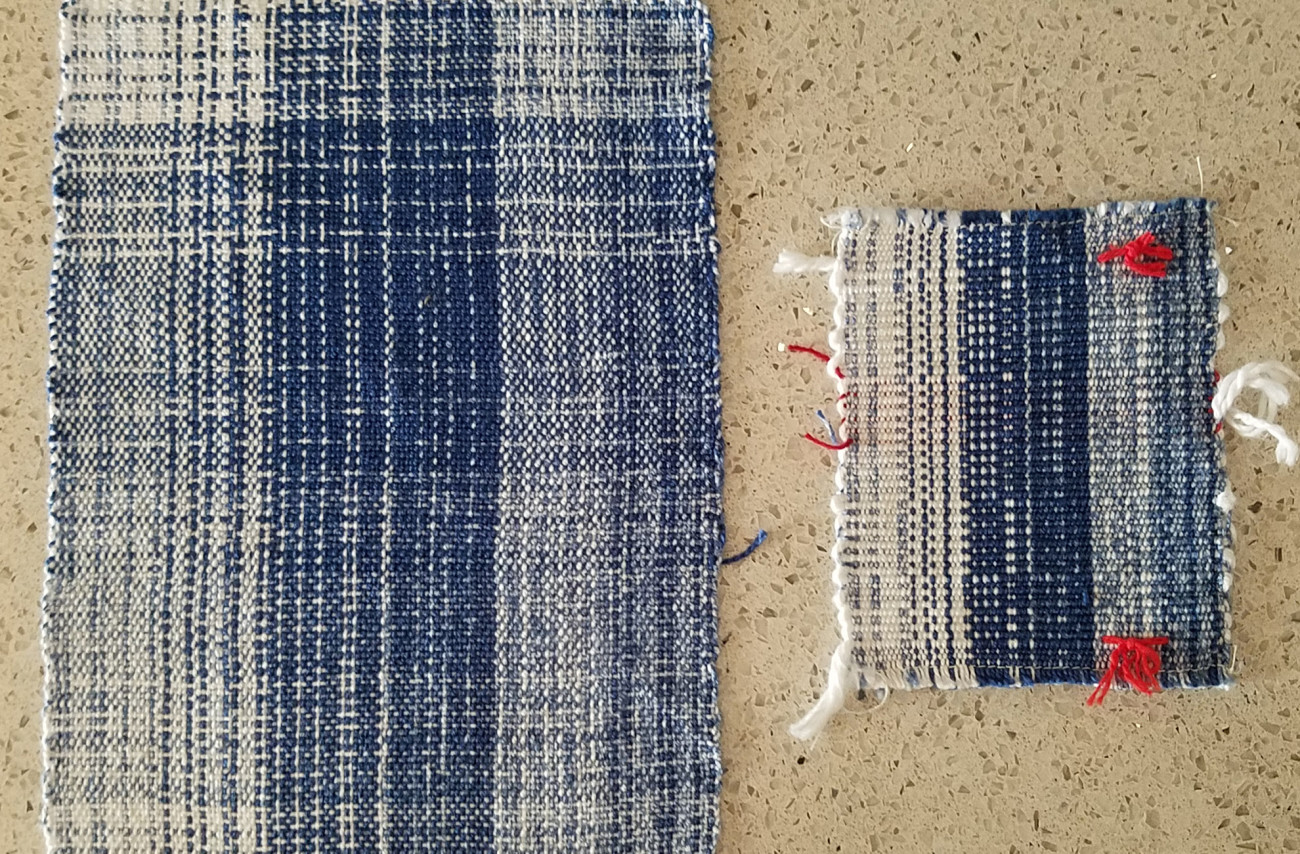