In this close-up shot of the placemat you can see how Ehrman combined yarns of different sizes for a subtle textural effect. PHOTOS BY CHRISTINE MILLER UNLESS OTHERWISE NOTED

Take a look at the placemat fabric shown above. What is it that you notice? Perhaps the subtle, shiny wefts of Lurex? What about its asymmetrical block design? Does the word “architectural” come to mind? Such discussions would have pleased Marli Ehrman, the designer and original weaver of this mass-produced placemat. Before you can understand the story of Marli Ehrman, though, you need to understand the Bauhaus and its history in Germany and America.

Modernist architect Walter Gropius founded the Bauhaus industrial design school in 1919. The Bauhaus (which loosely translates as construction shop) was born in the aftermath of World War I. Germany was in upheaval, and Gropius and others saw an opportunity for general renewal through art in a time of cultural crisis.

They believed that through art, the future could break with the past. Abstract design would stand on its own, for example, without referring nostalgically to older styles. If an artist used a traditional design, it could always be varied in a new way. Design should be governed by practical use. For example, an artist might reduce an object to its basic functional elements and still make an elegant piece. Finally, artists could move beyond making elite fine art objects by creating prototypes for modern industrial mass production.

Students at the Bauhaus were trained in these new ways of seeing and making. It began as a community of various masters teaching students, hungry to learn and create. Students learned by doing in workshops for metal, glass, wood, and textiles. They made projects on commission for industry. Students discovered their own angle of creativity in concert with their peers, while some of their teachers became major names in modernist art, such as Wassily Kandinsky, Paul Klee, and László Moholy-Nagy. 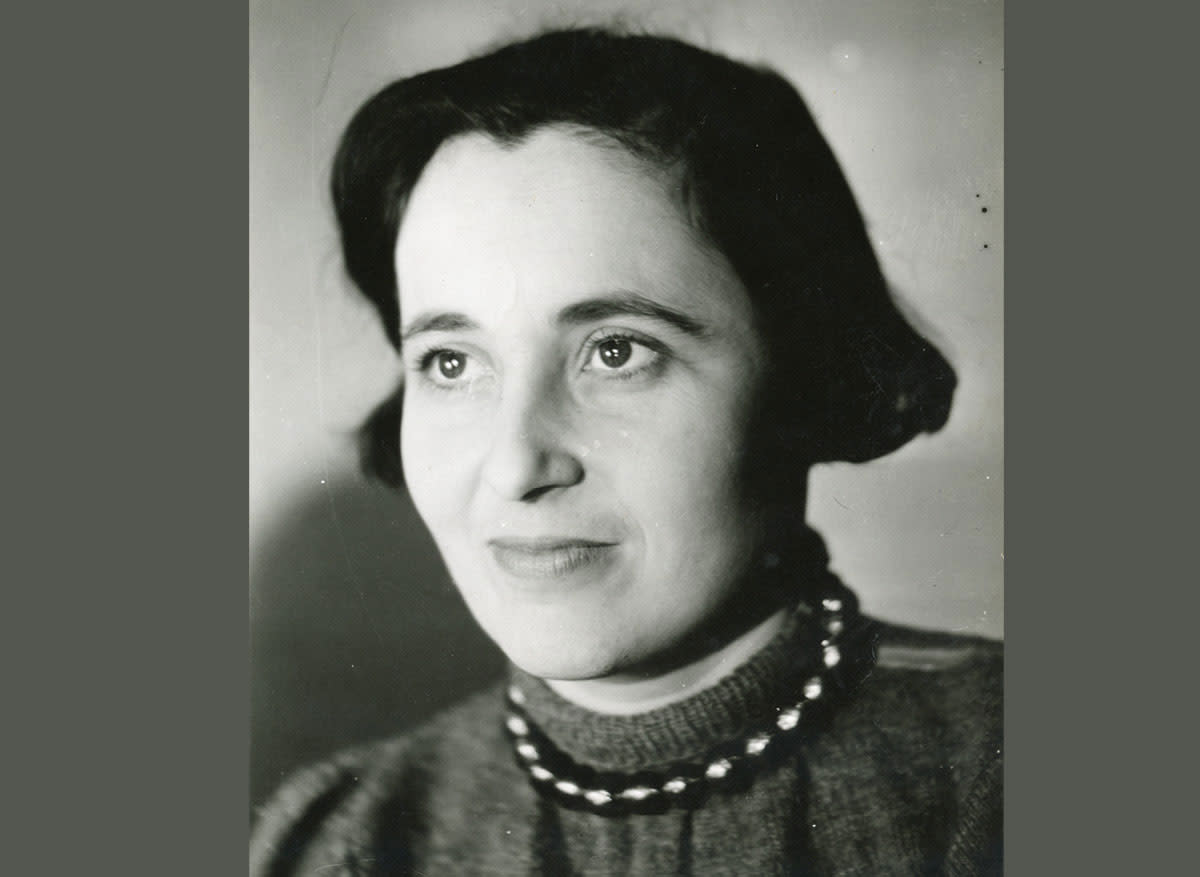 Ehrman and the Bauhaus

Marli Ehrman, née Heimann, was born in Berlin to Jewish parents in 1904. She began at the Bauhaus in 1923 and graduated as a fully accredited weaver known as a “journeywoman” four years later. Ehrman had also qualified as an elementary school teacher, so upon graduation, she spent five years at a school for Jewish children in Berlin, where she taught handcrafts. There she met and married Eliezer Ehrman, also a teacher and a scholar of Jewish history.

In 1925, cultural conservatives forced the Bauhaus to move from Weimar to Dessau. Those in power opposed the Bauhaus as being internationally oriented and radically modern instead of promoting traditional views of “pure” German art. In 1932, the Bauhaus again moved, this time to Berlin, before finally shutting down in 1933 after years of Nazi persecution and student arrests.

Germany’s loss became America’s gain as major Bauhaus figures emigrated overseas. They would richly influence at least two generations of American architects and industrial designers for everything from textiles to furniture to the shape of hand soap.

Some came by invitation, such as Anni and Josef Albers, who taught at Black Mountain College in North Carolina. Others, like the Ehrmans in 1938, arrived simply seeking refuge from rabid anti-Semitism. Fortuitously for Ehrman, exile turned out to be a return of sorts to the Bauhaus, albeit an Americanized version. Moholy-Nagy had accepted an invitation as head of the New Chicago Bauhaus and went on to found his own School of Design in 1939. That year, he invited Ehrman to join him and take over the weaving workshop.

At the school, Ehrman taught basic weaving and textile design, and on commission, supervised production of fabrics for industry. Her first national recognition came in 1941, when her upholstery fabrics won first prize in a competition for home furnishings sponsored by a partnership between New York’s Museum of Modern Art and nationally known department stores. Charles Eames, also a first-prize winner, used some of these fabrics for covering prototypes of his modernist chairs manufactured from molded plywood. She collaborated with Dow Chemical Company in 1953, using Saran, a synthetic fiber, to produce draperies with flame-retardant properties among other advantages.

Ehrman’s work with the School of Design ended in 1947 after Moholy-Nagy’s untimely death. After her departure, her former students asked her to continue with them as a mentor. These advanced weavers became known as “The Marli Weavers” and met monthly in members’ homes.

Surviving lesson plans, distributed at each session, breathe the Bauhaus spirit. She encouraged weavers to “play,” to “try different tie-ups of your own design.” In one handout, Ehrman suggested placing dominoes on graph paper to represent pattern blocks. Exploring clasped wefts, traditionally a tapestry technique, she wrote, “I would like to try it with you on rib weaves”—the mentor and students learned together. Perhaps surprising her students, she mentioned using sausage casings as weft, much as today’s weavers use plastic bags.

The Marli Weavers exhibited their work in homes and in 1951, at the Art Institute of Chicago. Warp and Weft reported: “Interesting things were done with summer and winter technique. Marli Ehrman, teacher of the group . . . showed a fine example of this in varicolored warp with gray and white weft.”

The group continued until 1991, but in 1956, Ehrman became an associate member and turned over the teaching to outside experts. The Ehrmans had moved to Oak Park, just west of Chicago, where Marli opened a successful retail business, The Elm Shop, for modern home furnishings. She also accepted commissions. In 1962, she designed the interior of the new Oak Park Public Library.

Probably her most celebrated client was Mies van der Rohe. In 1951, he commissioned Ehrman to develop a prototype of curtain fabric for his iconic 26-story Chicago apartment buildings at 860/880 Lake Shore Drive. He wanted their exterior to have a uniform appearance, emphasizing the structural geometry. Her fabric filled each window with soft, gray drapery.

Perhaps the best way to sum up Ehrman’s work is to let her speak for herself. Interviewed in 1953 in Everyday Art Quarterly, she said,

Well regarded and still affectionately remembered, Marli Ehrman retired in 1971 and moved with her husband to Santa Barbara, California, where she died in 1982. Her influence continues through her students such as Lenore Tawney, Angelo Testa, and Else Regensteiner as well as through their students on into the present day. 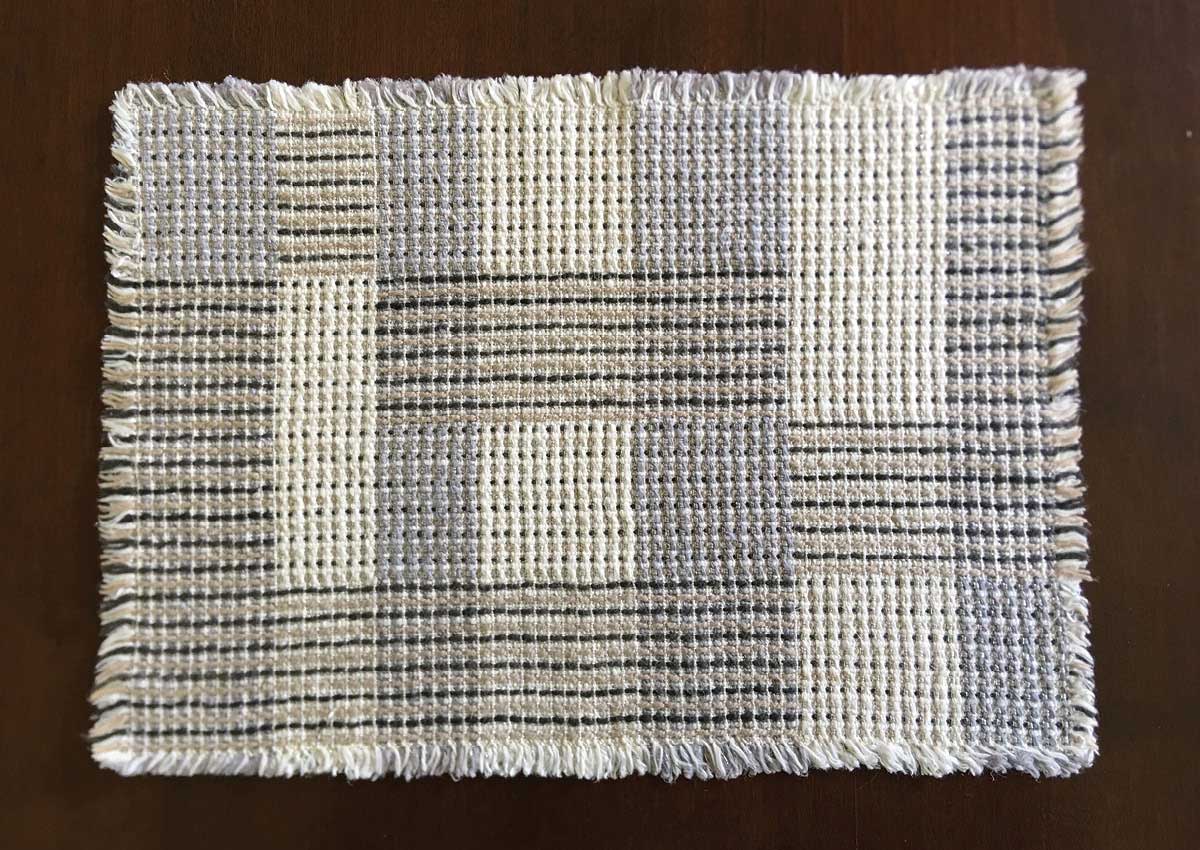 When we called Joen Goodman, donor of Marli Ehrman’s placemat to the Asheville (North Carolina) Art Museum, she led us back to the Elm Shop in Oak Park, Illinois. “I worked for Marli in her shop for five years!” were her first words when asked how she acquired the mat. “Marli gave me a set of four as a wedding present in 1960. They were commercial reproductions of her design, and she sold them in her shop.” By the end of our conversation, Joen generously offered to lend us one of her remaining three mats to use when designing the companion project. “So much better than working off a picture,” Joen wisely noted.

The authors gratefully acknowledge the cordial assistance of Paul Young, Executive Director of the Chicago Bauhaus Foundation, and archivists at the Chicago History Museum, Illinois Institute of Technology, and University of Illinois at Chicago.