The Draft: What is a Gamp?

Gamps a and b. Caption: Gamp a (at left) is a two-block turned twill. Gamp b (at right) features 5 designs of overshot. Photos by Madelyn van der Hoogt.

I can’t remember the first time I heard the word “gamp.” I was told, I think, that the word gamp derives from the umbrella used by Sairey Gamp, a character in Charles Dickens’s Martin Chuzzlewit. I envisioned an umbrella with colored sections somewhat (though not much!) like the sections of a gamp. It turns out Sairey’s umbrella is just big, black, and unwieldy, and gamp became slang in England for big unwieldy black umbrellas.

We may never know the specific origin of our use of the word gamp. Nothing about a woven gamp suggests a big, unwieldy umbrella! We do know, however, what the word gamp means to us, and we very much appreciate the rewards of weaving them. A gamp consists of equal-sized sections of different threading and/or color orders woven as drawn in.

The simplest gamp is a plain-weave color gamp. The warp consists of a stripe sequence of different colors, the same number of threads in each color. The same color order and number of threads are then used in the weft. The result is a cloth with woven squares showing every possible two-color blend of the colors used in the gamp. Once woven, color gamps can be used as design references for blending colors in future projects.

The gamp in Photo a is a color gamp in which a different color is threaded in each section of two-block twill (AAABBAAA). In the individual squares, color blends show three-quarters of one color, one-quarter of the other, and vice versa. The doubleweave gamp shown in Photo c is also a color gamp. Each square shows an even blend of two colors.

Some gamps are created with sections of different threading orders using a single structure. The most common of these are twill gamps. Different twill patterns are threaded in sections of equal width, and then each twill is woven as drawn in using a twill tie-up. Twill gamps can also be color gamps if each twill is threaded in a different color, such as the twill gamp in Photo d. 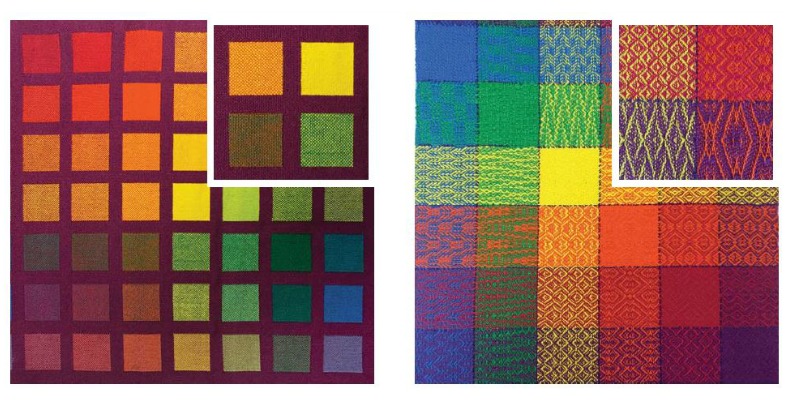 Image gamps c and d, caption: Gamp c (at left) is two-block doubleweave with a magenta background color and seven “window” colors. Gamp d (at right) is an eight-shaft twill with six threadings and six colors.

Block weaves can also be used for gamps. Overshot patterns are especially rewarding. Very unexpected designs occur when the treadling for one overshot pattern is used with the threading of another; see Photo b.

To create twill or block-weave gamps, the challenge is to design different threading orders that have the same or close to the same number of threads in each. For twill gamps, Davison and Dixon in Resources provide a great number of twill patterns for four-shaft looms, and Strickler for eight-shaft looms. For overshot, miniature patterns provide instant success; see Smayda in Resources.

If this article has inspired you to weave a gamp You can design your own project around it or check out the January/February 2018 issue of Handwoven to get Madelyn’s suggestions for yarns and threading. Check out the WIF library for a free download of the WIF for the 8-shaft twill gamp shown in photo d above.