Now that she lives in America, Yan continues to educate others on Li brocade, including giving hands-on demonstrations. Photos courtesy of Yan Zhang unless otherwise noted.

Thank goodness for Yan Zhang, the world’s foremost Li textile warrior since Huang Daopo. You might be asking, Who’s Yan Zhang? What’s a Li textile? And who is Huang Daopo? We’ll take these questions out of order. Just off the south coast of China, bathed by the Tonkin Gulf on the west and the South China Sea to the east, Hainan Island is home to the Li people, one of 56 ethnic groups officially recognized by the Chinese government. Since emigrating from the mainland three thousand years ago, most live by fishing or farming the fertile soils of the island’s mountainous interior.

Huang Daopo (1245–1330), known as the founder of China’s textile industry, ran away from an abusive marriage and ended up on Hainan Island. There, the Li people taught her the weaving and spinning skills they’d been practicing for centuries. Eventually, Huang moved back to the mainland, bringing her new cloth-making abilities with her. She, in turn, taught other women, and in time, the craft disseminated throughout China.

What makes these factoids of interest to weavers are the exquisite textile techniques Li women perfected millennia ago on what are very simple tools. The Li people have no written language, so for the past 30 centuries, the craft passed by word of mouth and demonstration from mother to daughter. That the five Li enclaves on Hainan spoke mutually unintelligible dialects further complicated the situation.

The story of the magnificent brocades of the Li people begins in the mountain rain forest of Hainan, where the ethnic group settled not long after its arrival there around 1000 BCE. The abundant resources of the region provided more than one hundred plant species from which dyes and bast fibers could be extracted, with kapok cotton and wild hemp heading the fiber list. The Li also collected wood and bamboo from the forest for making weaving tools and looms. 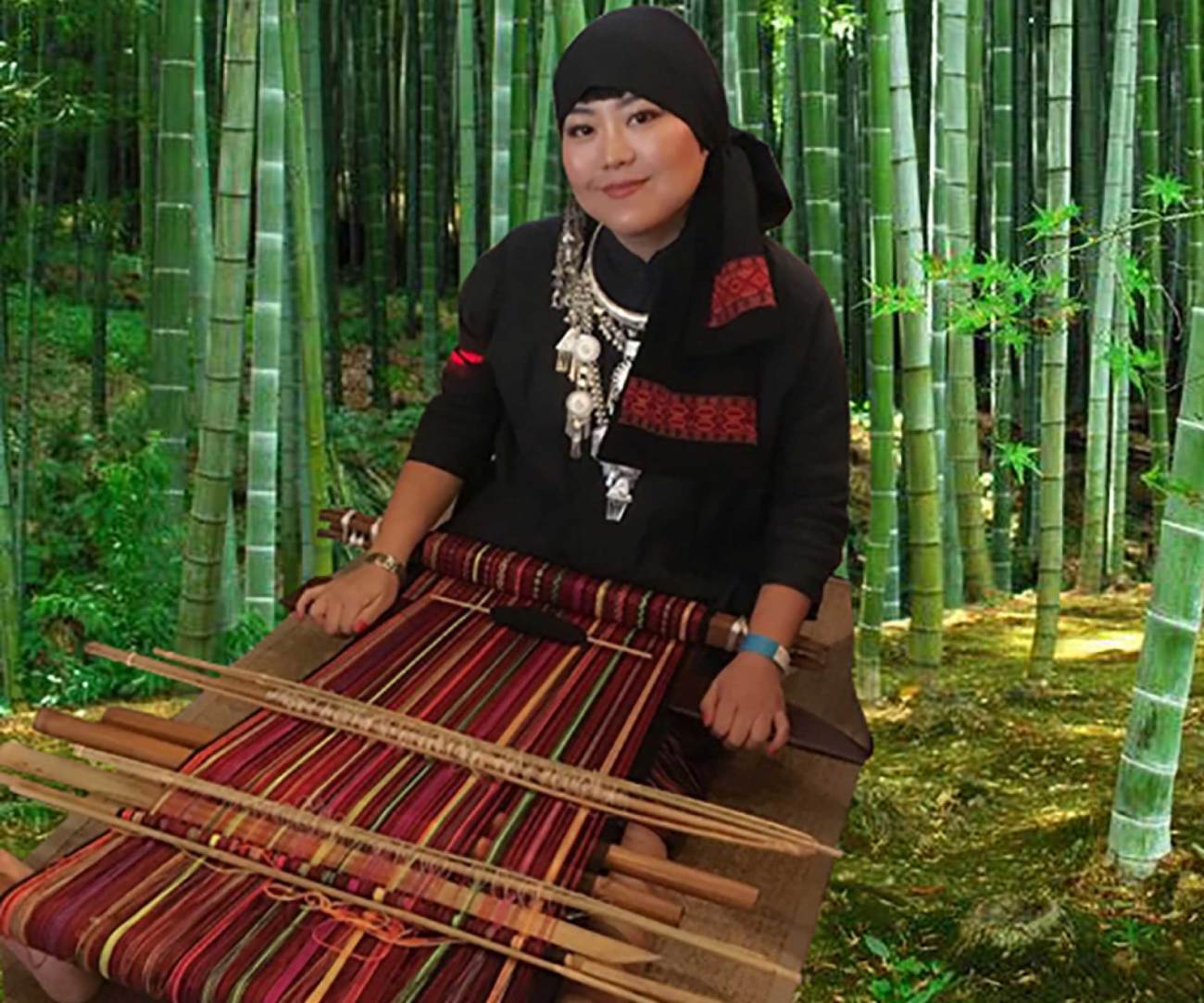 Already adept at fabricating cloth from bark, even before the short voyage to Hainan, the Li extended their skills to include spinning, dyeing, weaving, and embroidery. The women developed over one hundred complex design figures based on nature, history, mythology, deities, and geometric shapes. The woven patterns further diversified to reflect the aesthetics and cultural values of each of the five dialect groups, including varying totem figures, embroidery styles, and the use of warp ikat. Modern machines cannot duplicate these ancient patterns because they require intricate hand-manipulation of the threads that not even Jacquard looms can accurately reproduce.

Li weavers worked on a waist loom, a relative of the backstrap looms used by other indigenous peoples around the world. The waist loom consists of a rattan or bark belt, a wooden force stick (analogous to a breast beam) that rests against the weaver’s hips, and a foot rod. The warp is wound continuously around the latter two. The force stick is usually 20 inches (50 centimeters) long because that’s the average width between a Li woman’s hip bones. It is an ingenious and eminently portable device, not even requiring a tree, post, or doorknob to tie the far end to. My mind’s eye sees a giant inkle-like loom threaded between hips and feet, incorporating the weaver’s body into the machine. In recent decades, many Li weavers have defected from tradition to a more modern-looking (and less portable) incarnation with a permanent frame and actual heddles. In its defense, the new loom looks to be less hard on the back and legs and may expedite the production of Li brocade for the burgeoning tourist market.

The preferred warp and ground-weft color for Li brocade is black or dark blue. Some weavers add narrow stripes in lighter colors for more interest. The brightly colored pattern wefts are supplemental—they can be removed from the finished cloth without affecting its structural integrity, imparting a look of embroidery to the piece. This is, in fact, the definition of brocade (a Spanish word from the Italian for “to prick or embroider” and unknown in any Li or Chinese dialect). Brocade is often a one-sided cloth, meaning that the back is a mess of long floats or hanging threads, depending on whether the pattern wefts run selvedge to selvedge or are cut to fit the pattern’s requirements. Narrowly striped and densely woven Li cloth, on the other hand, is double-sided; it is woven with structurally integral wefts and is similar to an inkle band.

A 2009 United Nations Educational, Scientific and Cultural Organization (UNESCO) report designated traditional Li textile techniques an Intangible Cultural Heritage in Need of Urgent Safeguarding. It is estimated that 50,000 Li women actively practiced the craft in 1950. By the time of the UNESCO report, fewer than 1,000 women knew the basic techniques and patterns for traditional brocade weaving, only 200 practiced the specialized skill of warp ikat, and only 5 Li remained who could still do double-faced embroidery. Even more depressing, the average age of all remaining craftswomen was over 70—this was just 11 years ago.

This brings us to the story of Yan Zhang, determined Li textile warrior. Yan Zhang deplaned in Haikou, Hainan’s port of entry, for the first time in 1995. She was struck by the sight of a Li woman seated on a straw mat, weaving beautiful cloth on a simple loom supported between her hips and feet. Not a weaver at the time, Yan found herself instantly charmed and intrigued.

Over the next 20 years, Yan immersed herself in Li textile culture, living for extended periods among the five dialect groups (Qi, Ha, Sai, Meifu, and Run). She participated in the daily routines of village life while absorbing the traditional skills from master weavers for all four facets of the process—spinning, dyeing, weaving, and embroidery. She learned that designing a pattern could take months from idea to sketch to execution. She followed her teachers to poorer, more isolated areas of the mountains to bring the people there the highly marketable craft of Li brocade as a means to reduce their poverty.

A small sample of Li brocade. Photo by Kathy Fitzgerald

Yan also realized that past language problems kept special techniques used by each dialect cohort from spreading to the others. Making detailed notes of these disparate methods led her to compile them in a book, including lost forms such as the elaborate and technical ceremonial dragon quilts, documenting an art representing thousands of years of development and transformation.

Yan left Hainan Island in 2015 as an accomplished weaver and cultural ambassador to China and the world. The Hainan Province Intangible Cultural Heritage Handicrafts Association made her its executive vice president. Her book, Li Textile Weaving Techniques, was published in Chinese in 2018, the first written detailed description of Li textile work ever. She currently resides in Southern California, where she is active in a San Diego guild and weaves Li brocade on her waist loom for hours on end at home when not working on an English translation of her book. Yan also travels throughout California to demonstrate the unique weaving style she loves so much. “My mission,” she says, “is to spread this ancient and precious art and techniques to the world.”

Author’s note: The author would like to thank Yan Zhang, who could not have been more generous with her time and expertise.