What is Scandinavian Weaving?

Have you ever wondered what exactly is Scandinavian weaving?

Have you ever wondered what exactlyis_ Scandinavian weaving? In this Endnotes article from the March/April 2017 issue ofHandwoven Elisabeth Hill interviews two weavers familiar with weaving in the Scandinavian way to find out the answer. ~Christina_

The March/April 2017 issue of Handwoven issue is all about Scandinavian weaving, but what defines Scandinavian weaving? To find out, I asked Ellen Turner, a wonderful Danish weaver, and Emily F. Gwynn an energetic young weaver and former Vävstuga apprentice. Here are their thoughts.

What IS a Scandinavian weaver?

Emily: I think you can either be a Scandinavian-born weaver or you can be a weaver from anywhere who has studied weaving in the Scandinavian tradition. It’s not just weaving things that look Scandinavian. It’s technique, material, and equipment choices such as the connection to the past that comes with using a countermarch or counterbalance loom. Ellen: The opinion at our guild Christmas party was that it was not fair to lump us all together. We think there are big differences between, say, Danish and Swedish designs and tastes. There were murmurings of Swedish weaving being so “traditional,” whereas we Danes . . . 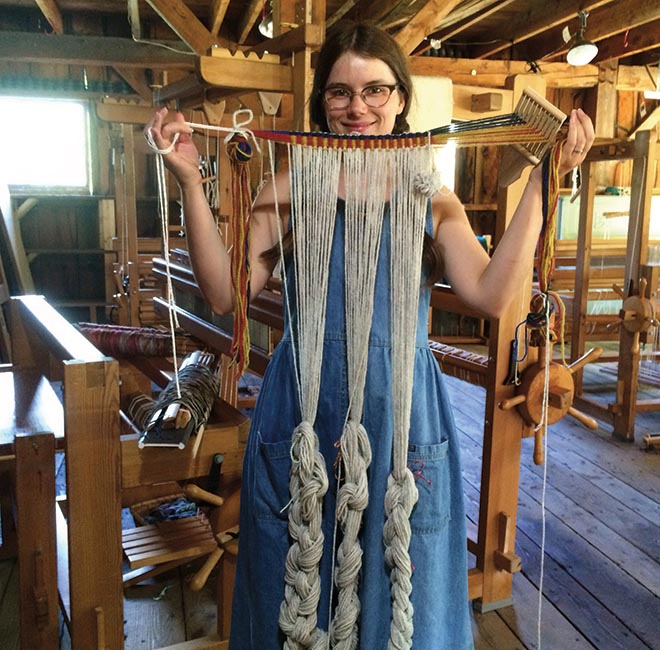 Emily F. Gwynn considers herself to be an American weaver working in the Scandinavian tradition. She specializes in heirloom quality textiles, especially table linens. Photo courtesy of Emily F. Gwynn.

What are Scandinavian looms?

Ellen: In Denmark today, a “real” loom is a countermarch, which we call a “Swedish-style” loom. In older times, the looms were typically 4 shafts with 4 or 6 treadles, but nowadays 8 seems to be the minimum, and 10, 12, or 16 are not uncommon. I have two countermarch Glimåkras. Nearly all our boat shuttles use quills instead of bobbins, so they are lighter and have a narrower profile. I own two American boat shuttles. Both are beautiful, handmade in exquisite woods with fantastic finishes. And I never use them! 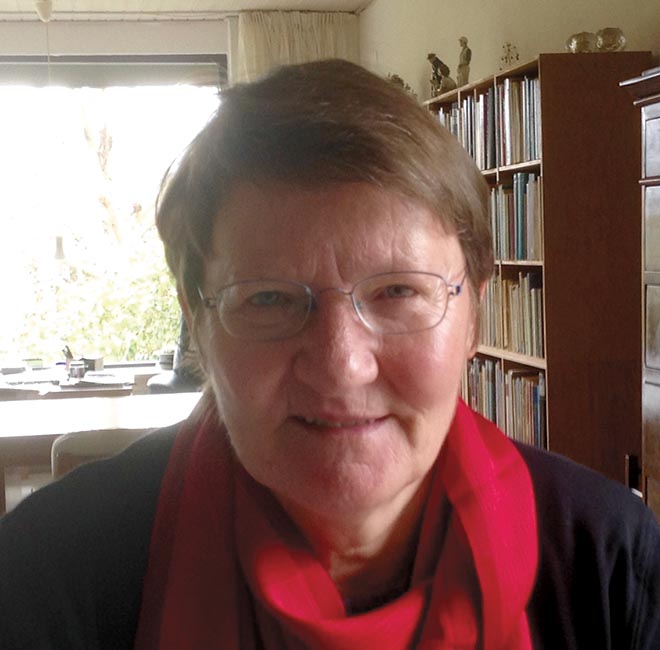 Ellen Turner is an accomplished Danish weaver who occasionally surprises her colleagues by weaving with silk or even Tencel! The red silk scarf is her own design. Photo courtesy of Ellen Turner.

How is Scandinavian design different?

Emily: I find Scandinavian weaving to be more crisp and square. For example, Americans have a passion for wavy overshot, whereas Scandinavians love block damask. I also think Americans focus more on the look of their finished items, while Scandinavian weavers take a more holistic approach, weighing durability, suitability of the materials for the use, etc. This isn’t a criticism: I think American weavers allow themselves more room for experimentation. Ellen: At our guild Christmas lunch, the consensus was that American weaving is exuberant, often with elaborate drafts and saturated colors. Whereas we favor simple lines and subtle colors. That “cool Nordic” thing, you know.