Drawdowns show threads at right angles, but many times threads deflect during wet-finishing. Read what Susannah figured out about how to predict deflection.

Front and back views of Susannah Day’s Clouds of Alpaca scarf from Handwoven November/December 2021. Photos by Matt Graves

Susannah Day wove a beautiful scarf that is in Handwoven November/December 2021, and she knew without sampling how the threads were going to behave during wet-finishing. Learn what Susannah has figured out about diciphering deflection in spot Bronson. Maybe it has applications with other weave structures! —Susan

One of my favorite things is venturing out into uncharted territory. This often gets me into trouble when things don’t go quite as planned; but the reward of discovering something special far outweighs the many times I’ve ended up with a mess. Weaving is no exception. When I wove the first iteration of what would eventually become my Clouds of Alpaca Scarf, I laid out a pleasing design in my weaving software with lots of diamonds and zigzags. After weaving, I pulled it off the loom, wet-finished it, and ... well ... where I was expecting diamonds, there were awkward Xs and other strange lumps. Before weaving another version, I decided I needed a way to visualize how the threads would shift during wet-finishing before it was woven.

Compare the drawdown at the left, which has no deflection, and the fabric on the right, which is deflecting. All photos and drawings from here down by Susannah Day

I designed the scarf with spot Bronson. Spot Bronson is a simple lace weave formed by an alternating pattern of plain weave and floats. Each “spot” of floats breaks up the integrity of the fabric and allows the neighboring threads to shift. Bronson lace is very similar but adds an extra thread of plain weave between each lace unit, allowing weavers to repeat a block of lace as many times as they like without creating long floats on the front or back. This is great for laying out blocks, but every thread of added plain weave also stabilizes and strengthens the fabric. The deflection that occurs with spot Bronson relies on the more minimal structure that is gained by leaving out those extra plain-weave threads. 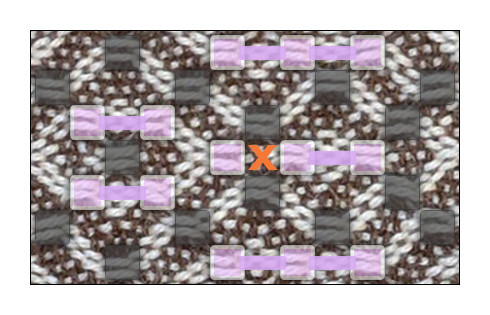 Two spots will connect if they are sitting side by side with a single space of plain weave between (where a spot could have been woven but wasn’t). The exception to this is when there is a spot above and below that space. 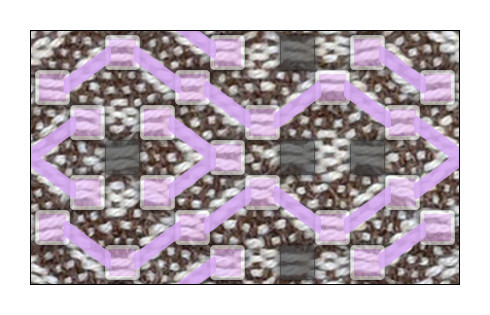 Any two spots will also connect if they have a single space between them and sit one pick above or below each other. 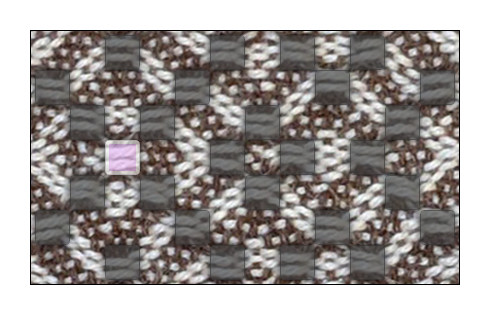 If the circumstances that create rules #1 and #2 don’t apply, a spot won’t deflect. Those I consider lonely spots with no deflection.

On the reverse side of the fabric, the same rules apply, but rotated 90 degrees as the deflection occurs vertically with the warp yarns rather than horizontally with the weft yarns. See the top right photo.

With these three rules in hand, I can predict how fabric will deflect before it is woven. I have created dozens of designs using weaving software, printed their profile drafts to make the spots easier to see, and connected the spots with a marker in order to see an approximation of the final design. 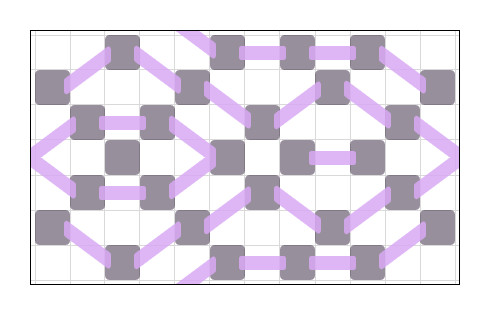 Using a profile draft, Susanna was able to predict the deflection in her scarf.

I have only scratched the surface of what can be done with this type of deflection in weaving! Would more shafts create new ways for the spots to deflect? With pick-up, the regular grid of spots could be broken up for even more possibilities. How would different materials affect the final look? I have tried wool and wool mixes, Tencel, and cotton with varied success. Nothing I’ve tried works quite as well as the alpaca I used for the scarf in the magazine. How would using stripes or a color-and-weave look? I am excited to try out some of these ideas and to see where my experiments take me.