A simple twill can look more interesting and complex when stripes of color in the warp don’t line up perfectly with the twill.

Blanket #2 on the loom. Note the light gray stripe in the middle. That is the pivot point. Photo by Anne Elixhauser

I started with the goal of making a multi-colored striped meditation blanket—long and narrow—for my husband to wrap around his shoulders and cover his legs. After I experimented with different structures for the stripes, a new approach occurred to me: I could use one structure across the width of the piece, vary the width of colored stripes so they did not coincide with the weave pattern, and separate the colored stripes with a neutral color that I would also use as weft. Overlaying the warp colors at various intervals in the warp would make different parts of the weave visible between the neutral-colored stripes.

I began with a point twill draft (#160 on page 37) from A Weaver’s Book of 8-Shaft Patterns (ed. Carol Strickler) and used weaving software to modify the draft. Working with half my intended width in the reed, I added colored stripes, adjusting their widths so that they never coincided with the threading pattern, thereby creating unique combinations of color and pattern in each stripe.

When I was happy with the appearance of the stripes in the draft, I used the mirror repeat tool in my weaving software to double the number of ends. When I used the repeat tool, I included the warp colors so that both sides of the blanket would be the same in pattern and in color. To further emphasize the mirrored nature of the pattern, I added a center section of another twill as a visual pivot point.

For the first blanket, I hand-dyed 3-ply white wool (1,300 yd/lb), that I sett at 12 epi. I wanted the mirrored stripes to be similar in color, so I doubled the number of ends in the color stripes when winding my warp chains for dyeing. For example, an 8-end stripe on one half of the warp would also appear in the other half as an 8-end stripe so I needed 16 ends in the warp chain. I dyed all of the warp chains on the same table using a limited range of colors so there was some consistency in the colorway, but I varied the application of dye in each chain. 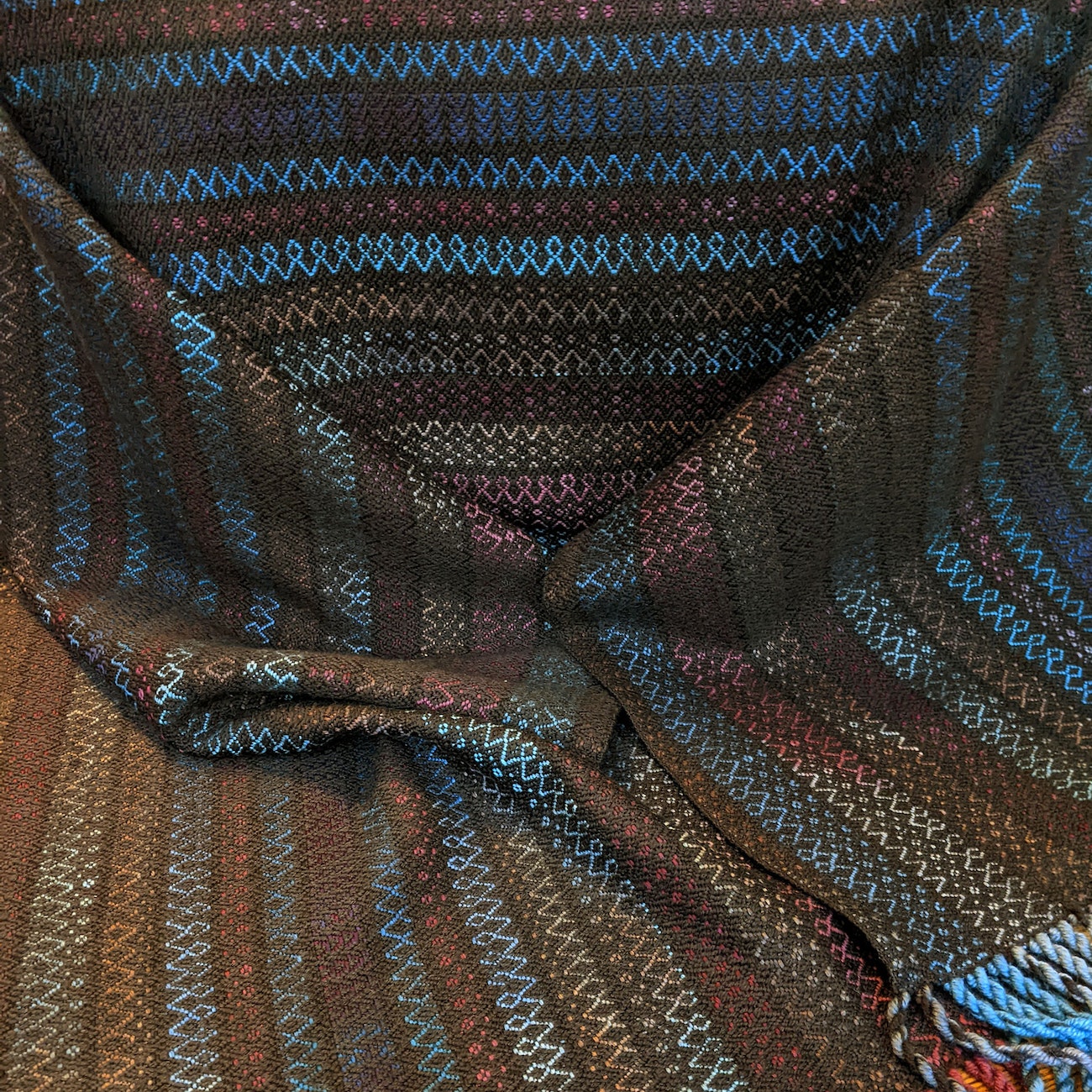 Anne’s first blanket was woven on a hand-dyed warp. You can see the pivot-point of her mirrored stripes close to the top of the photo. Photo by Anne Elixhauser

I used the front-to-back method to warp my loom. First I sleyed all of the brown-black stripes in the reed, carefully counting empty dents between stripes. Then I sleyed each color stripe working from the right and from the left, and moving toward the center. When sleying a stripe on the right, I started with the rightmost end. When sleying a stripe on the left, I started from the leftmost end.

For the second blanket (see photo at top), I used Harrisville Shetland wool (1,800 yd/lb) sett at 12 epi in ten colors using Charcoal for the neutral stripes and weft. I wound the warp in the order the stripes appeared, including the neutral stripes and then simply tied onto the previous warp (which I almost always do because weaving once never seems enough). Both resulted in a simple, but complex-looking, warm and drapable blankets.