What do you do when weaving inspiration strikes and you don’t have access to your floor loom? Learn how Debbie Dudley used cloth woven on pin looms to "dress" a felted owl of her own design.

Molly the owl was created with a variety of techniques including pin-loom and peg-loom weaving, needlefelting, and beading.

Each fiber-festival season, I can’t wait to see which yarns will catch my eye and become inspiration for the next project. Will it be an irresistible texture, such as bouclé? Or perhaps it will be a fiber in a luscious shade of bright coral, buttery yellow, or deep rich cream.

Last year, when the inspiration finally hit, I was unable to access my floor looms. What I did have at hand were a 7-by-10-inch Harrisville peg loom and two Weavette pin looms, one sized 4 by 4 inches and the other 2 by 2 inches. For my palette, I chose a selection of naturals and neutrals: a handspun cream wool, copper silk strips, brown and rust suede strips, dove gray yarn, and tweed yarns in browns and charcoals. I came across some copper lace ribbon, and the notion of bird wings was born. As I looked at the yarn, the first thing to come to mind were images of epaulettes. In turn, those shoulder decorations made me think of wings, which finally led me to contemplate one of my favorite birds: the barn owl (Tyto alba). 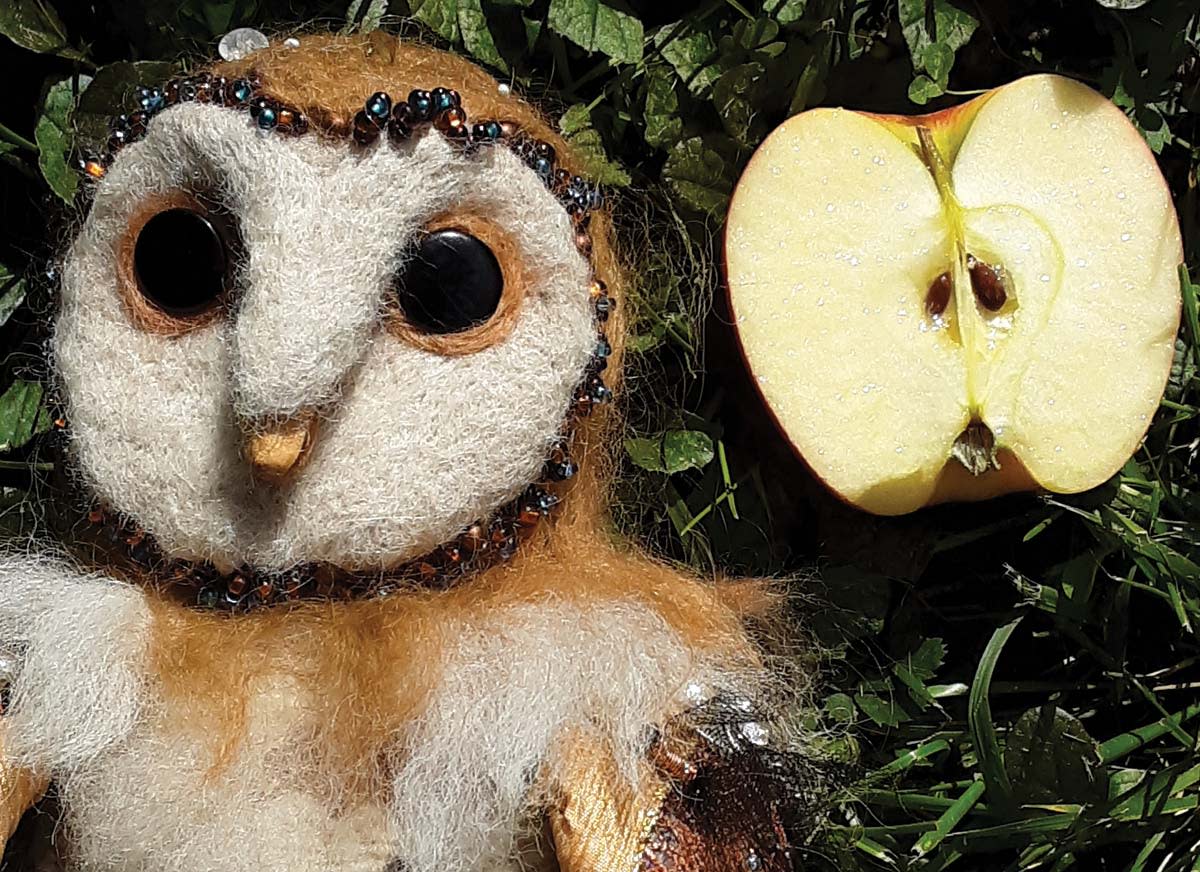 Debbie found making Molly life-size (around 15" tall) made it easier to determine her final proportions.

With my palette chosen and the inspiration of the barn owl to guide me, I studied the bird’s physique. I noticed that when its wings are fully extended, there are three distinct sections. The uppermost section looks like a shoulder cape, which tied in perfectly with the copper lace ribbon as epaulettes. The middle section in a mature bird has a jeweled texture. And finally, broad, strong flight feathers make up the wings’ bottom section. As the wings are trifolded when tucked up at rest, I only had to depict one-third of each wing. This in turn gave me what I needed to figure out the dimensions of the bird. I determined that at 15 inches, my handwoven barn owl would be life-sized.

Now that I knew the size of the owl I wanted to create, I was able to determine how big to make the head. I needlefelted a round ball and sliced part of it off to form the “plate” of the face. Needlefelting with fleece allowed me to sculpt the widow’s peak and brow ridge as well as the formation needed to support the wooden toggle button used as the beak. Barn owls have specialized feathers that surround their faces to enhance their hearing, and I used burgundy, amber, and blue beads to depict this feature. Once her sweetheart face was formed, she became “Molly.”

Molly needed to wear her handwoven body cover. I sculpted her body by needlefelting polyester fiberfill (also known as “stuffing”). I used fleece that matched her owlish wimple to needlefelt along her ribs to cover the transition between her handwoven breast and the handwoven back. I wove the body front using a cream handspun wool from a local shepherdess-spinner along with a commercial mill-end bouclé. The back of the body is a mix of the cream handspun wool, mill-end wool yarns in tan and gray, and tweedy wool and nylon bouclés in tones of brown, gray, black, and rust. 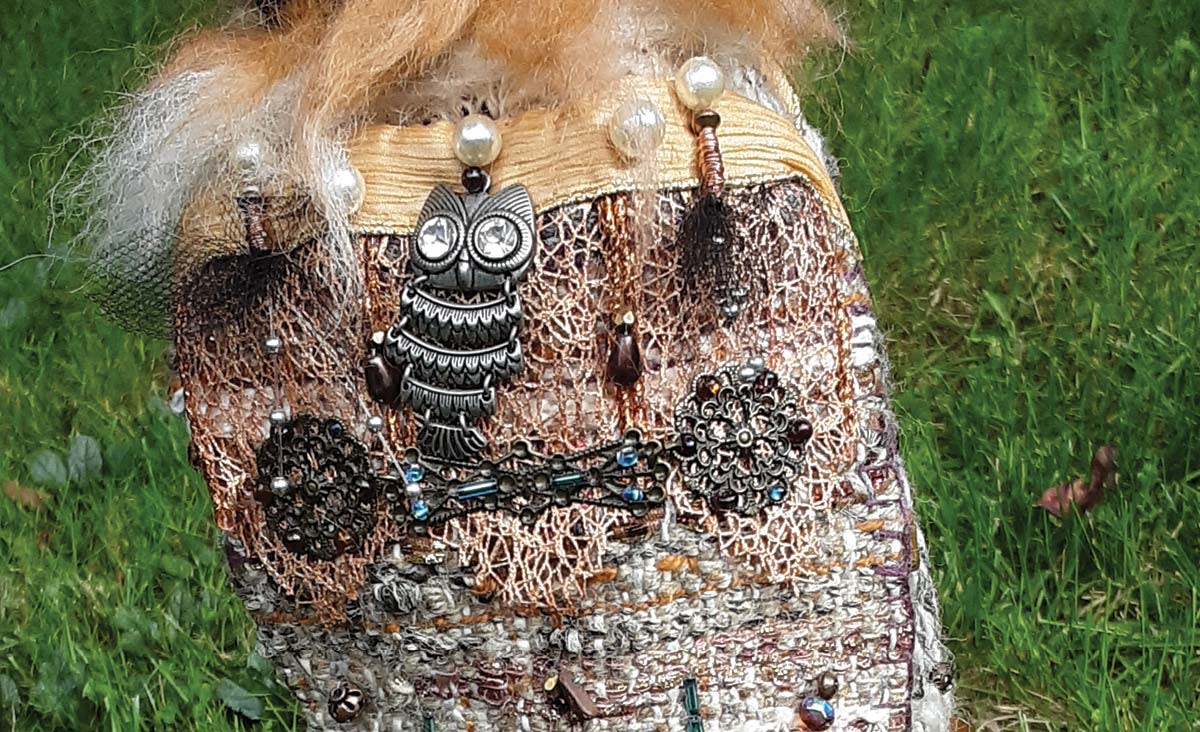 The copper ribbon on the upper wing served as Debbie’s initial inspiration for weaving a barn owl. She also used beads and other baubles as embellishment to create a more fantastical version of a barn owl’s natural jeweled patterning.

While I used sculpture armature wire in Molly’s wings and tail piece to help them retain their forms, I needed something stronger for her legs and feet. I did some research and discovered that heating a wire coat hanger removes the coating that prevents it from easily being reformed. This technique worked perfectly and with coat-hanger wire, I was able to create her U-shaped legs that ended in feet and talons.

It was a bit of minor surgery to slice open the body and carefully insert the U part of the wire and then needlefelt it closed. As I wove the upper wings I used some of everything. The majority is wool, but there are also nylon bouclés, silk strips, rust-colored suede, cotton pearl floss, metallic yarns, and ribbon yarns. I used the cream handspun yarn on the 2-by-2-inch pin loom to weave thigh coverings, and the same yarn to wrap the lower legs down to the claws. Specialized feathers allow owls to move silently, so I decided to also weave underparts to represent the feathers. I wove the underparts for the wing and tail using a 4-by-4-inch pin loom and the handspun cream yarn but this time with accents of dove gray yarn. I wove the tail section using cream wool, suede strips and feathers. 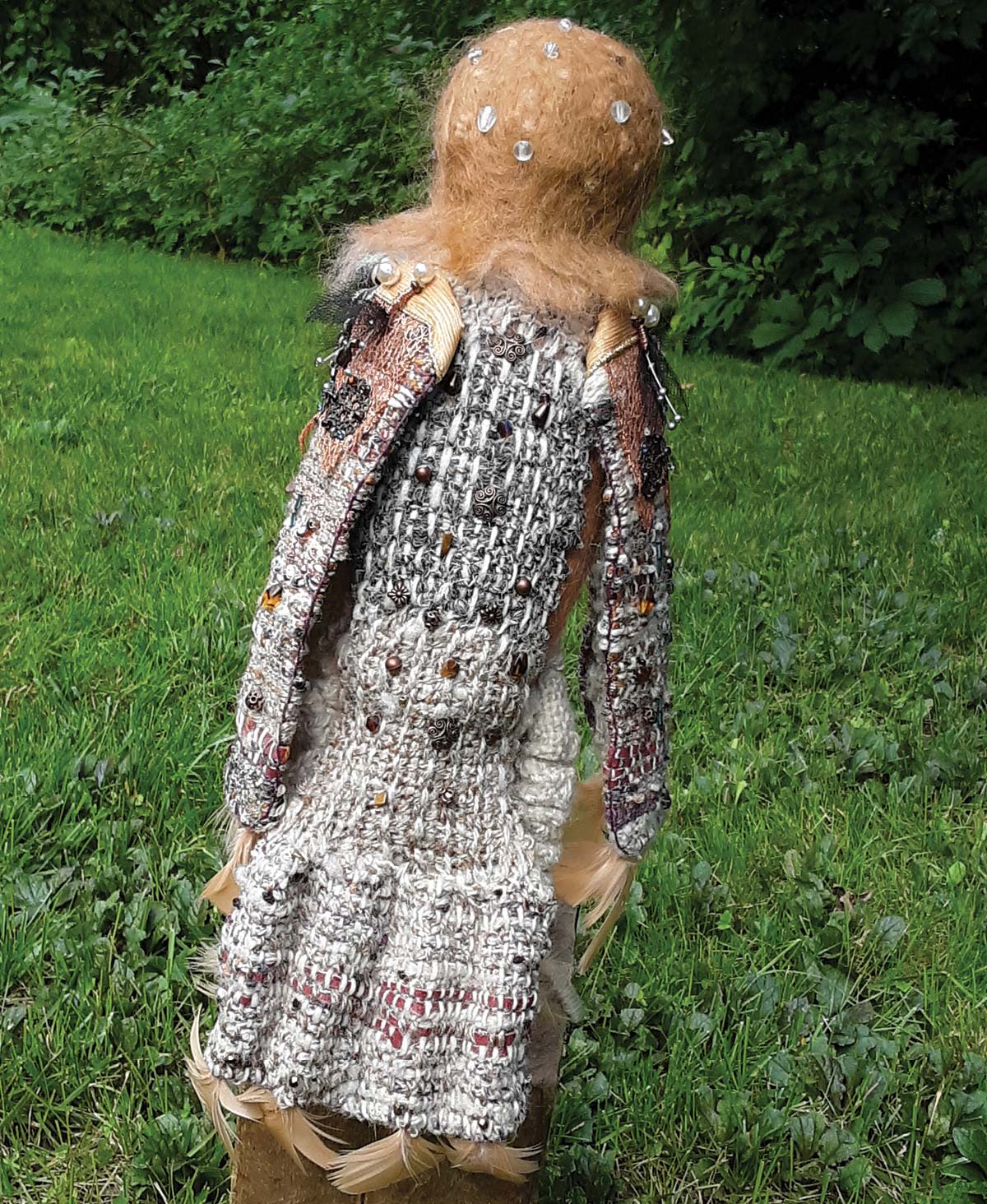 Molly when viewed from the back.

I began assembling Molly by stitching the breast and back pieces onto the body form along with the tail. Next came the wing placement, and I took care to allow the wings to “flap” rather than pinning them down. Finally, I attached her head mantle to her shoulders. Sadly, I was not able to determine how to allow her a 180-degree head turn as true owls enjoy. I bent her coat-hanger legs as for a landing pose, and her claw tips were stapled into the top and sides of a wooden fence post. I had learned from my research that owls have specialized toes that enable them to grip using two toes at the back when needed. That helped terrifically when creating her posture. Molly’s pose is as if she has just landed. Tapping her head causes a rocking sensation and wing flutter, which enhances the illusion. Instead of the jesses (leather straps used to tether birds in falconry) that might be used with a domestic bird, she has a decorative amulet on one foot. Finally, I replicated the luminescent bejeweled owl quality by embellishing the bird with beads, pearls, seashells, and copper finials.

Imagine that Molly has flown, making less noise than a whisper, and has just landed atop a fence post where, with wings folded, she’s still gently rocking from her momentum, her own handwoven barn owl amulet clutched in her talon.