I knew Jannie was an accomplished weaver and teacher, but what I didn’t know was the extent of her drive to learn about weaving, today and in the past.

Jannie Taylor brings her smile and enthusiasm along when she is teaching weaving.

I've taken two in-person workshops with Jannie Taylor in the past, and now I've been able to learn even more from her in two recently released video courses, Introduction to Shadow Weave and Designing Shadow Weave. I know that she is a very accomplished weaver and teacher, but on a whim, I asked her to describe how she came to weaving and to tell me a little more about herself that wouldn’t necessarily be covered in a standard resume. I was delighted and surprised with her responses and was particularly amazed at how she started her fiber journey! Who builds their first spinning wheel? —Susan

I have been sewing since I was a young girl. Both my mother and grandmother were skilled seamstresses, so making garments was something I was very comfortable doing. On the other side of the equation, my father was a skilled carpenter, and so woodworking was also something I grew up doing. These two skills have shaped my weaving experience from the beginning.

When I started out in the world of fiber, I had way more enthusiasm than money. But I had wood, tools, and skills, so I decided the way to get started was to build my own simple spinning wheel—which I did. That allowed me to turn relatively inexpensive fiber into yarn—lots of yarn. After a while, I had amassed dozens of balls of handspun thread and began thinking about how to turn it into fabric.

It just so happened that the occupational therapy department where I worked was disposing of their looms; I guess they were too old-fashioned for our modern times! So my first “real” loom was a free, 4-shaft table loom that I quickly converted into a direct tie-up floor loom by adding legs and treadles. I knew right away that I was not going to be a table loom weaver—way too slow for me. I needed my gratification to be more instantaneous! Once I had that loom up and running, my stash of handspun yarn came in very handy. My very first project on that loom was fabric for a blouse in my handspun tussah silk thread. Did I say I have always been fearless when it comes to jumping in the deep end of the pool? You just need to keep swimming.

I love to weave—period. I have enjoyed every step of the journey, from working my way through Marguerite Davison’s green book (A Handweaver's Pattern Book) almost 50 years ago to teaching multi-shaft Compu-Dobby weaving at the AVL Weaving School today. The last couple of years have made me appreciate how much I enjoy weaving and, maybe even more, how much I treasure being part of the community of weavers.

I also love to teach weaving. I am constantly inspired by the creativity and ingenuity of weavers. Every class I teach is a two-way street. I feel I learn at least as much from my students as they learn from me—sometimes more!

Right now, I am gearing up to get back to in-person workshops this year. I am scheduled to teach at the Conference of Northern California Handweavers’ convention in San Mateo, in May, as well as Complex Weavers Seminars and Convergence in Knoxville in July. I am grateful that we have had Zoom to keep us together during the pandemic, but I have missed the pure enjoyment of being in the same room with other weavers. There’s nothing like it! 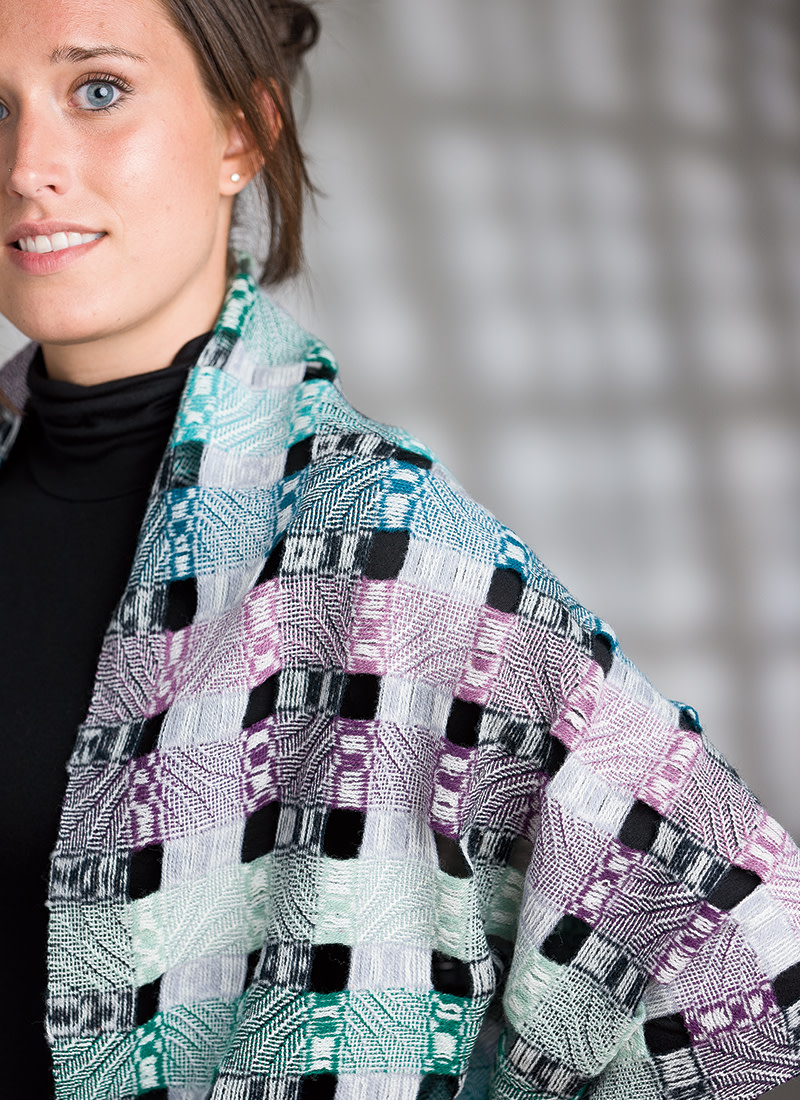 For this Windows and Shadows shawl, featured in Handwoven January/February 2012, Jannie showed how she continues to explore the world of weaving, and shadow weave in particular, by adding spaces in the warp and weft that created windows in the final piece. Photo by Joe Coca