It Was a Very Good Year

1999 was a transitional year for Handwoven and also its 20th anniversary year.

Pattie Graver’s Take It Easy scarf is the perfect project for when you want to relax at the loom and maybe work on some of the fundamentals.

I remember 1999 almost as if it were—hmm. Thirteen years ago? Surely not. It was a transition year for Handwoven, with Jean Scorgie passing the editorial magic wand on to Madelyn van der Hoogt. Handwoven has been incredibly fortunate to have a string of skilled, visionary, capable editors, from Jane Patrick to Jean to Madelyn and now to Anita Osterhaug. But still, changing editors is an upheaval. We were so focused on smooth transition that we almost forgot our twentieth anniversary!

That issue, September 1999, happened in the inter-editor gap, so it was a team effort. We pondered over how to celebrate without indulging in back-patting or recycling old stuff. Our solution was to turn to the people who had made Handwoven so special from the very beginning. We had projects and articles from past editors and past tech editors and past regular contributors such as Sharon Alderman, Connie LaLena, Louise Bradley, and Deborah Chandler. We ran retrospectives with Randy Darwall and Anita Mayer. We even used a model from the earliest issues, and how great she looked twenty years later! 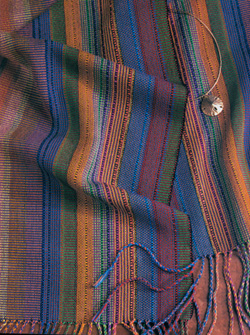 A Scarf for a New Millennium by Bonnie Tarses

Looking back through that anniversary issue brought back wonderful memories, but looking at the other issues from that year was pure inspiration. There was the doubleweave issue, with a great piece on Finnweave and a reversible jacket with overshot patterning (sounds gaudy, but it’s really pretty great). Another issue focused on weaving of the American Southwest, with counterpoint collections of terrific towels and good-looking tops. Another eclectic issue spanned the territory from kumihimo to warp rep rugs to huck lace. Madelyn’s first issue, the November/December one, was a celebration of “firsts”—special parties, special celebrations, and a “new millennium” scarf whose clever warp order would have been a great distraction from worrying about the end of electronic life as we knew it.

Speaking of the electronic life, what’s really amazing is that now you can get all five 1999 issues as a pdf download. You can page through them in all their back-lit glory, you can search through efficiently, and you can print out the instruction pages. It wouldn’t have occurred to me, either in 1979 or 1999, that that was in our future.