The Strutco holds a special place in the heart of many a weaver. In her Endnotes article from the September/October 2017 issue of Handwoven, Daryl Lancaster gives a little lesson on the Strutco and explains why she personally loves this lovely little loom.

The Structo Manufacturing Company of Freeport, Illinois, began making two-shaft metal toy looms in 1921. By 1930, production had shifted to a standard metal 8-inch-wide four-shaft loom called the 240 because it had sixty heddles on each of its four shafts. The Structo 240 was a staple in many weavers’ collections for decades. 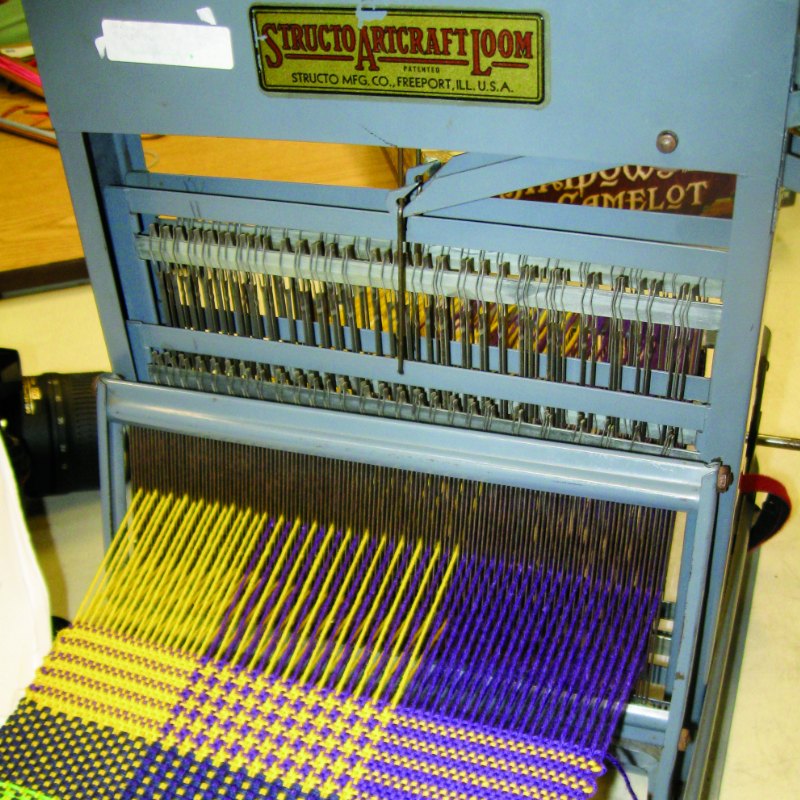 The Structo Artcraft 240 loom works well for sampling with a minimum of loom waste. With the current push toward small portable looms, this loom remains popular today and is a regular item on eBay and in guild equipment sales. In 1947, the Structo 240 sold for $18.75. Currently, Structo 240 looms regularly sell for $200 or more depending on their condition.

The Structo 240 comes with a fixed 15-dent reed that can be limiting. To circumvent that limit, Mary Scott of Serendipity Farm and Studio, who owns seventeen Structos including a twelve-shaft model, found a manufacturing source for reeds of different dent sizes made to fit the Structo 240. Mary sells the reeds along with replacement heddles produced specifically for the Structo 240 (see Resources). The Facebook group Structo Loom Owners has numerous files including manuals, catalogs, photos, and other information about Structos and costs nothing to join. There are currently 213 members in the group, which was started by Nancy-Cassandra Kenfield-Lea shortly before her passing in 2016. Nancy, an avid collector of Structo looms, owned fifteen of them, including a sixteen-shaft model.

Many of the original Structos came with “patented Structo Ready Warped Spools,” prewound with 20/2 mercerized cotton. The company also sold prewound spools of 8/4 carpet warp and 40/2 Irish linen. The spools of mercerized cotton in colors cost $1.69 each in 1947. The 2-inch-wide spools slipped onto a hexagonal rod warp beam. Four spools across the warp beam produced 240 warp ends 20 yards long. Prewound spools are no longer available, but spools can be refilled using standard sectional warping equipment.

To find out the rest of the story, and how Daryl knows so much about these fascinating little looms, check out the Endnotes of the a September/October 2017 issue of Handwoven!