In the Spirit of “What If?”

Sometimes I just want to play “what if” with an unusual weft. This time a bunch of plastic strips fit the bill.

Cotton and plastic runner on the loom after many mis-starts! All photos by Susan E. Horton

I have no recollection of what was in the box, but a year or so ago, an item we received at the house was wrapped in long strips of what looked like plastic wrap. It was intriguing to me as a possible weft, so I wound up the strips and added them to my stash. They sat there taking up space until recently when I was finishing up a shawl warp on my rigid-heddle loom and threw in a few picks of the plastic. I wove a few inches with and without alternating thin weft picks, cut it off, wet-finished it in cold water, shook it out, and then laid it flat to dry. It was by no means beautiful, but there was something there that I liked.

My sample was nothing to look at, but it told me that the plastic might work as weft.

This past weekend with nothing on a loom and being in the mood to weave, I decided to weave a runner using the plastic strips as weft. I have a set of 8 blue and white placemats that I wove last year and decided to add red to the colorway to create a runner that would work for national-holiday barbeques and French Bastille day celebrations. A post by Madelyn van der Hoogt gave me the idea of weaving a runner that would fit on the table with the placemats in place rather than merely one that worked without placemats. I measured and determined a hemmed runner about 12" wide and 48" long would be perfect and would fit on both my inside and outside dining tables.

By playing around with stripes in Fiberworks, I designed a pattern that works a little bit like rep in that in 4 of the red and blue stripes you can change which color is on top by eliminating a thin weft pick. I warped a little more than 3 yards, threaded a straight 4-shaft draw, and within the day had my warp on the loom. Although I had originally woven with the plastic on a rigid-heddle loom, I was working on my floor loom for a firmer beat. My warp was 5/2 cotton and my epi was 12, a wide sett for 5/2 cotton because I wanted the plastic to show. 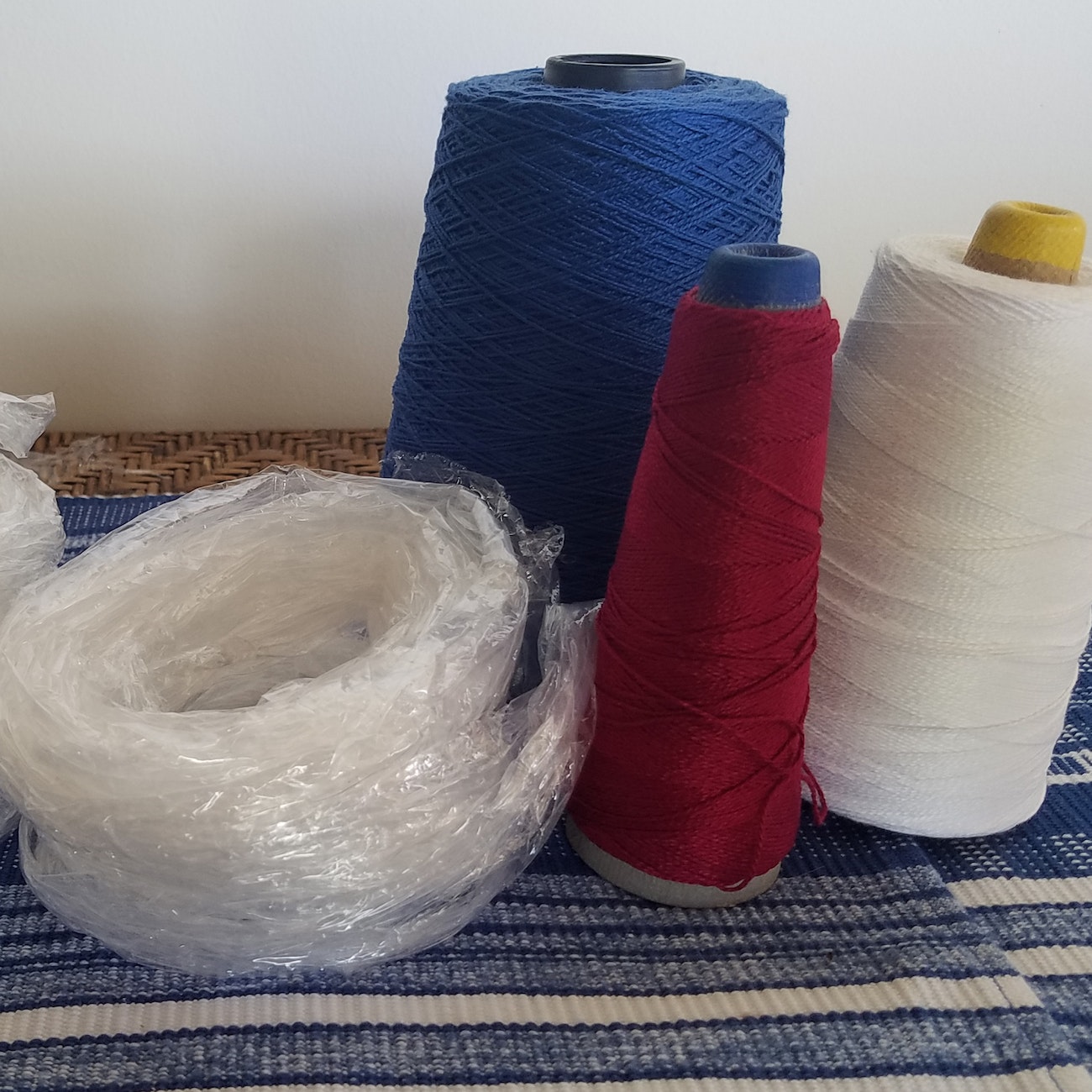 Red, white, and blue 5/2 cotton for the warp and thin weft and the plastic strips for the thick weft

The next day I planned to weave the runner. Up to this point, all had gone very smoothly, but it turned out that when I wove with the plastic on my rigid-heddle loom, I didn’t take the edges into account. The plastic is somewhat springy and has a tendency to pull in the edges if you don’t twist it and place it carefully. At the wide sett, I also found the different yarns I was trying in the header were pulling in too much, causing the runner to look almost cup-shaped as it grew from the narrow header width to the main runner width. I wove header after header and wove and unwove picks of plastic for most of the day.

Finally I wondered if a temple would help. I dug one out, and after a few missteps, I was able to weave a header using 3 strands of 5/2 cotton that didn’t pull in too much and to get the plastic section of my runner started. I have to place the temple carefully so as to not damage the plastic, but it seems to be working, as I am now in the early stages of loving a project I’m working on. It turned out not to be a project I could weave in a weekend, but it feels like it will be one I’ll be happy with. Stay tuned! I’ll let you know how it works out!