Behind the drafts and swatches in this one volume of 8-shaft weaving patterns lies a story of women with extraordinary dedication.

A team of dedicated women brought to life The Weaver’s Book of 8-Shaft Patterns, still an essential reference decades after first publication. Photos by Anne Merrow

Flipping through the hundreds of pages of photos and drafts in The Weaver’s Book of 8-Shaft Patterns can seem like flipping through a mysterious code book. In black and white, with photographs and drafts, this one volume of 8-shaft weaving patterns is a contemporary weaver’s treasury. Behind the drafts and swatches lies a story of women with extraordinary dedication.

We learned through surveys that many (maybe a majority) of our Handwoven readers had 8-shaft looms, but the majority of those were only using 4 shafts because they didn’t know what to do. At the same time, everyone lived off Marguerite Davidson’s “green book” [of 4-shaft weaving patterns]. So we wanted to do a green book for more shafts. “It will be easy!”

First, we hired Carol Strickler to create and coordinate. She was a serious “structure” weaver. Everyone should read the intros to each structure chapter to see how she thought about it, (which was not necessarily how everyone thought about it). But she was smart and logical and a superb craftsman.

Then we put out a call for people willing to weave samples, we ordered tons of yarn so the samples would have consistency, and Carol curated the drafts of people who volunteered. (Some 250 are listed on the Contributors page.) She assigned drafts that she thought important to include. She strong-armed people. They came from all over the country and beyond. She harangued people to meet their deadlines, double-checked their samples against their drafts, kept immaculate files. The project kept overshooting its due date, mostly because of people not meeting their deadlines. 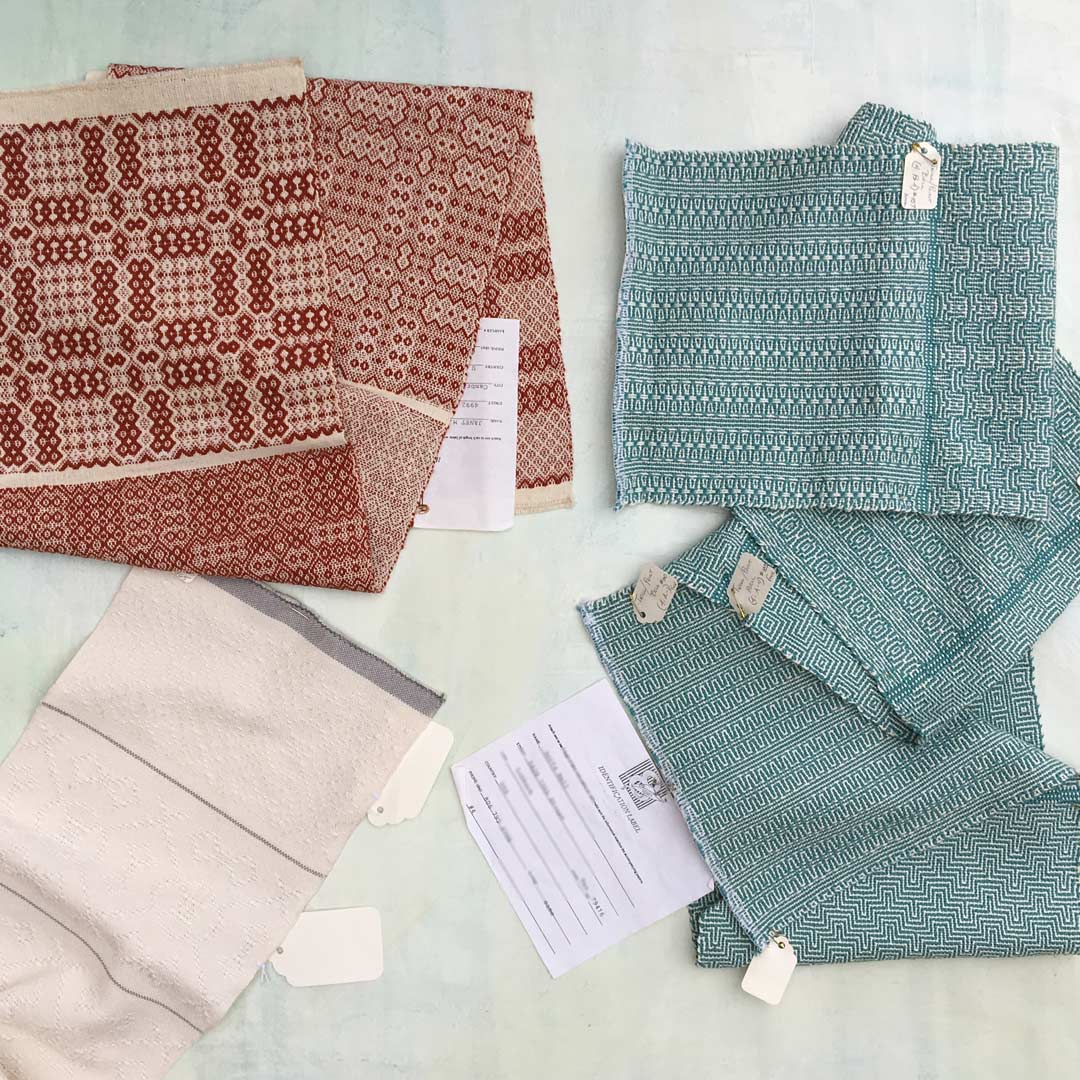 We were technologically challenged. Each of the drafts was hand-drawn using Corel Draw or somesuch. Each had to be carefully checked for accuracy. Each had to be drawn down to make sure it matched the actual sample. We had a visiting editor from Beijing, Yetzen Li, at Interweave at that time, and creating the drafts fell to her. She also wove a number of samples. She actually overstayed her one-year visa to finish the project, and her contribution cannot be overstated.

Then there were the photographs. Each sample, about 900 of them, had to be photographed at 1:1 resolution. We hired a photographer, Dick Kezlan, who had a studio in the basement of the building across from Interweave. I don’t think he knew what he was getting into. We took samples to him in big batches. Someone had to carefully iron each one, show Dick what part to photograph, and then coordinate his shot with the correct draft. (Jane Patrick did the bulk of this work.) This was before digital photography! A million black & white negatives, which had to be printed!

And there was Carol’s health. At some point during the project, Carol was diagnosed with uterine cancer. Her time was taken up with chemotherapy sequences and eventually a bone marrow transplant. The book was her lifeline through all this. I remember being on the phone with her as she corrected proofs while getting a blood transfusion. She was so dedicated and so brave and so uncomplaining. I don’t know how she kept her focus, but she did. And I remember hand-delivering the first copy to her when she was in hospice care at home.

The Work of Many

The Acknowledgments page recognizes some of the team that contributed to the book over the three years it took to create it. There were others. It was a huge endeavor. It should have taught me to never say “It will be easy.”

Linda has not yet learned not to say, “It will be easy,” and she is often overly optimistic. But she still inspires astonishing results. —Anne