Finding an appropriate floral draft was easy, but I soon realized that if I wanted to weave hops, I would need to figure out the pattern myself.

Last summer, one of my best friends, Rose, married a professional brewer. Due to life and the realities of traveling with a small child, I wasn’t able to attend the wedding. To make up for missing the wedding, I decided to design something spectacular as a belated wedding gift. I pulled out my trusty copy of Carol Strickler’s The Weaver’s Book of 8-Shaft Patterns, flipped to the section on rosepath, and began planning.

I envisioned a towel with borders on both ends featuring 2 rows of rosepath: One row would be red flowers in honor of Rose, the other row would be bright-green hops, representing her new husband. (For those not involved in the world of beer brewing, hops are flowers used by brewers to add various bitter flavors to beer.) Finding an appropriate floral draft was easy, but I soon realized that if I wanted to weave hops, I would need to figure out the pattern myself.

I plugged a pine-tree-shaped rosepath draft, also from Strickler, into my weaving software. I flipped it vertically and carefully adjusted the treadling sequence until I got something that looked like a hop cone. My husband homebrews, so I showed the draft to him in the hopes he could see what I was going for. He recognized it as a hop cone right away. He suggested I make the stem slightly longer and also, if it wasn’t too much trouble, to please weave him a towel as well, sans flowers. I made his suggested change, and with the design complete, I shifted my focus to weaving.

Because I wanted the design to stand out, I used a thick pattern weft and a thin tabby weft, just as I would do for overshot. I soon discovered that my chosen green pattern weft was too thin. That problem was easily solved by doubling the pattern weft. I also found that I needed to pay closer attention to my tabby than I was used to. Before each tabby pick, I’d press one tabby treadle and then the other and decide which would lock in the previous pattern pick better while also keeping an eye on my warp flats. So, instead of treadling 1-2-1-2 for tabby, I might end up treadling something like 1-1-2-1-2-2. (I’m not sure why past-Christina didn’t write the tabby treadling sequence down after the first row, but hindsight is 20/20.) 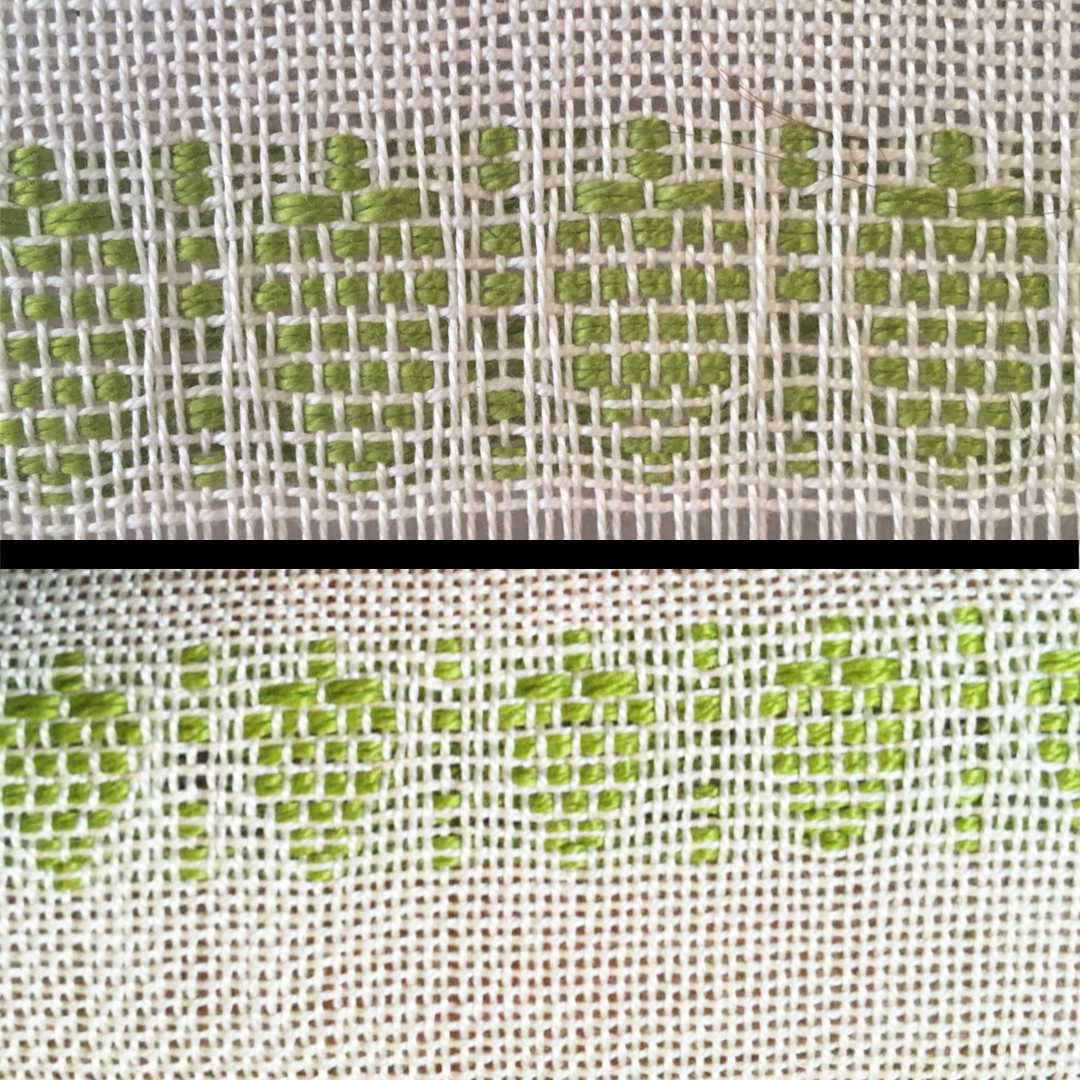 Christina’s first attempt at woven hops, at top, looked good, but was a bit too elongated thanks to the tabby weft. She eliminated 2 pattern and 2 tabby picks in the weft to get the shorter, stockier hop cone shown at bottom. PHOTO BY CHISTINA GARTON

I started with my husband’s towel, after warning him it would be experimental. (I don’t know why I didn’t just add on extra warp for sampling—past-Christina had far too much confidence in her designing ability. Don’t be like past-Christina.) After weaving my first row of hops, I saw that the tabby picks elongated the hops design—something I should have foreseen. I went back to my weaving software and adjusted the draft to make a slightly squatter hop cone. When I got to the second end of my husband’s towel and the second row of hops, the new treadling sequence wove a perfectly balanced cone.

Weaving rosepath was tricky at first. The draft, as written, required a treadling sequence with some treadles tied to more shafts than I’m used to—sometimes as many as 7! For the sake of my legs (and the ancient treadle chains on my loom that love to snap), I decided to do a skeleton tie-up of sorts. I wrote everything out and tied up my loom so I would never have more than 5 shafts tied to the same treadle. Sometimes that required throwing a pick, adjusting my tie-ups, and then throwing another pick, but it worked. My selvedges were another problem area. The ones on my left side were a hot mess, something I had not dealt with since my early days of weaving. Even when I fiddled with them, they seemed to draw in an obscene amount. If I were to do these towels again, I’d absolutely invest in a temple or make one.

In the end, I wove 3 hoppy towels: one for Rose, one for my husband, and one for a good friend with the nickname of “Hop Daddy” and who is the head brewer at one of our favorite breweries in Las Cruces, New Mexico. I also wove 2 towels in a fun twill pattern because as pretty as these rosepath towels are, the floats on the reverse side make them less than practical. Thinking about it now, after the fact, I would next time plan to hem the towels so that the back of the rosepath design is within the hem and, therefore, protected. This might not be a traditional approach to hemming towels, but I’m a rule breaker at heart. 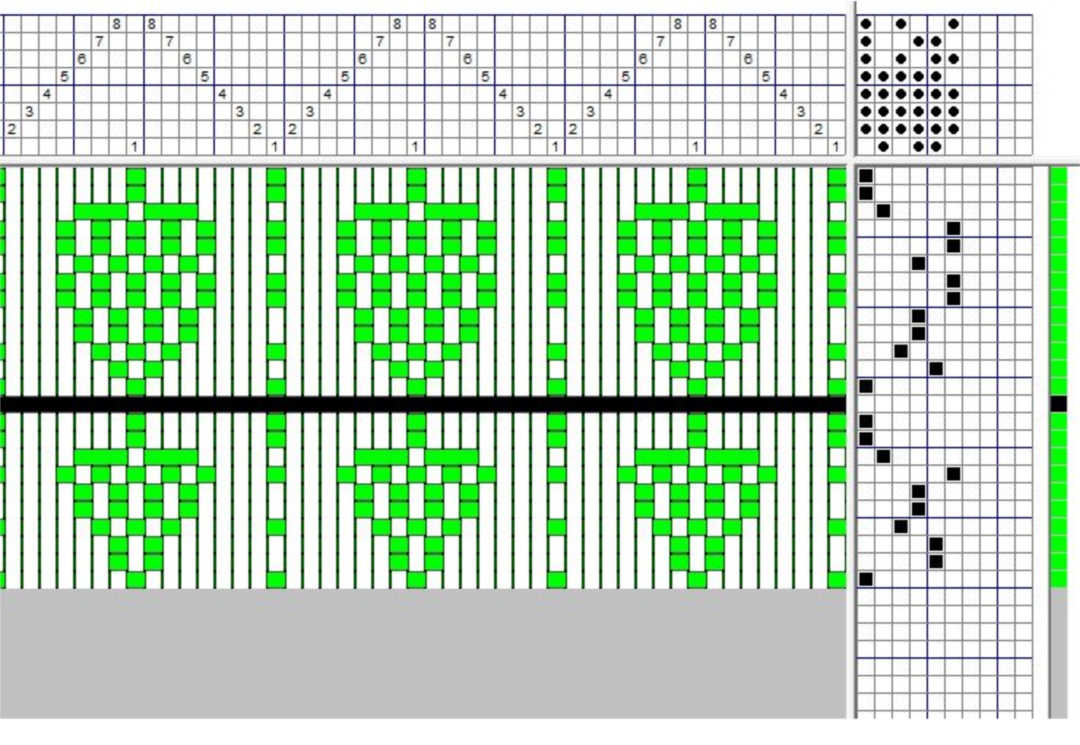 Christina’s drafts for her hop cones: her first attempt is at top, her final draft at bottom. While the drawdown of the bottom draft might look a bit off, so long as you use tabby when weaving the hop cone will fill out nicely.

Designing and weaving in rosepath was great fun and a nice challenge. I love my hop design, and I’m very proud of how well it turned out! If you want to try the design for yourself, I’ve included both of my rosepath hop drafts above.