Homage to the Simple Stripe

From a white wedding dress to "blue-collar" clothing, cloth tends to reflect our cultural beliefs and values. Here's weaver and Handwoven contributor Liz Moncrief to tell you about the spotted history of stripes.

From a white wedding dress to "blue-collar" clothing, cloth tends to reflect our cultural beliefs and values. Here's weaver and Handwoven contributor Liz Moncrief to tell you about the spotted history of stripes.––Anita

Did you know that Medieval Europeans, who for the most part had only seen drawings of wild critters such as zebras, lions, and colorfully-striped fish, considered these beasts to be created by the devil himself and believed that viewing such a creature in person would hasten their trip to the netherworld? Anything so unkempt in its visage could not have been pure in its creation. This notion might very well have been the basis for an assumption by feudal society that the stripe, used in any context, was demonic.

According to Michel Pastoureau, an archivist at the Sorbonne in his recent work The Devil's Cloth, the well-used stripe has a long and, at times, sordid history. Stripes in clothing denoted a low social status and even criminal association. In the 1300s in France, one could be arrested for the use of stripes in textiles of any kind, but especially clothing. In fact, the Carmelites, on a visit to France from Palestine, were condemned for their unfortunate choice of horizontal striping in their handwoven monks’ habits. This fashion faux pas prompted Pope Alexander IV to condemn their order entirely and entreat them back to their home parish. Pope Boniface VIII, twenty-five years later, issued a bill prohibiting the use of stripes in clothing, whether clerical or pedestrian. It stands to reason that all this resulted in a lack of enthusiasm for stripes in textiles for hundreds of years afterwards.

But what about familiar motifs like mattress ticking, seersucker, pinstripes—even America's very own Stars 'n Stripes? These are items of comfort to most of us, and I, for one, am relieved that, notwithstanding its social history, we no longer consider nefarious such an elementary and clean design element: the simple stripe. 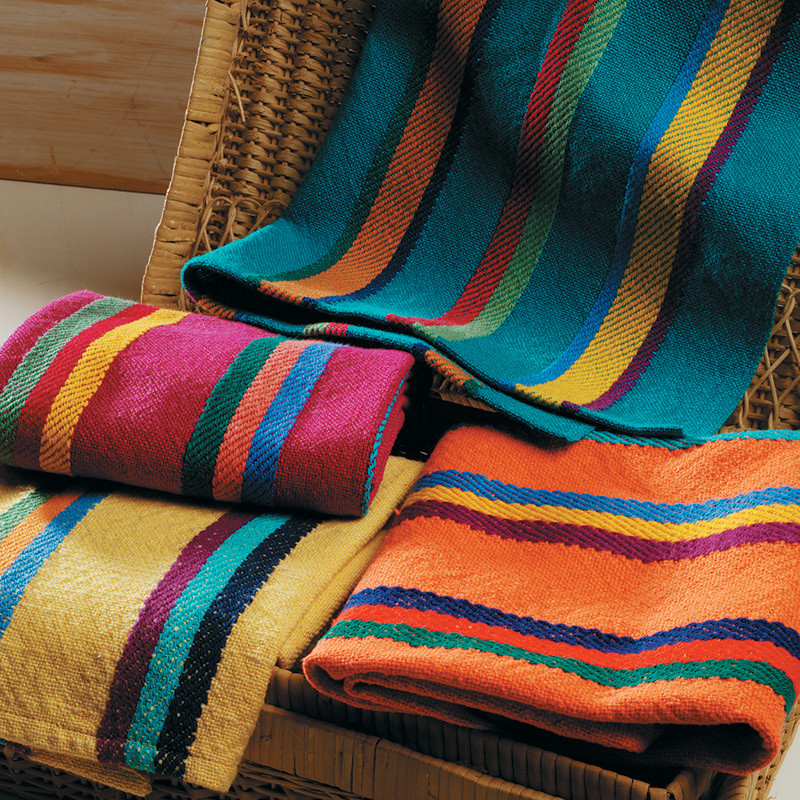 I love pulling out The Best of Handwoven: Yarn Series A Dozen Projects in 8/2 Cotton for ideas on weaving honest and solid “home goods,” appreciated as much by our forebearers as by homemakers today. Betsy Morton's Designing Stripes for Towels, or the Country Rustic Towels by Kathy Bright are two very simple to weave, yet complex-looking patterns that are a delight to see. Both offer just the right degree of challenge in designing your own color palette although of course you can use the color schemes suggested. They also reward you with hours of fun at the loom. Just by pulling from your stash and using this eBook, you'll be weaving great textiles for your home in no time.