From Scary to Snuggly: The History of the Teddy Bear

Theodore Roosevelt might not look much like a Teddy bear, but he is the namesake of the famous toy

I’ve always had a love–hate relationship with Valentine’s Day. The red and pink color combo isn’t really my style, then add the cheesy proclamations of love that line the greeting card aisle … I’d rather just steer clear of the whole thing from New Year’s Day through February 15. (Then I’ll show up in search of discounted candy.) Celebrating loved ones is a sweet gesture, sure, but let’s tone it down a bit already! The one thing about Valentine’s Day to which no one could object, however, is the quintessential Teddy bear. The soft, round faces and plush little bellies bring joy to even the hardest heart. It is crazy to imagine that the story of the Teddy bear actually begins at a horrific, bloody scene on the hunting grounds of Mississippi in the year 1902.

After a particularly stressful time during his presidency (1901–1909), Theodore Roosevelt needed a vacation. Mississippi Governor Andrew Longino invited him on a hunting trip under the guidance of Holt Collier, a former slave and expert in the area. Roosevelt, eager for excitement, announced that he wanted to take down a bear right away. On the second day, Collier tracked down a black bear. Wanting to save the kill for Roosevelt, who wasn’t nearby at the time, Collier knocked the bear out with a whack of his rifle and tied it to a tree. When Roosevelt arrived upon the bloodied and unconscious bear, he declared that killing the animal in its weakened state would be in poor taste. 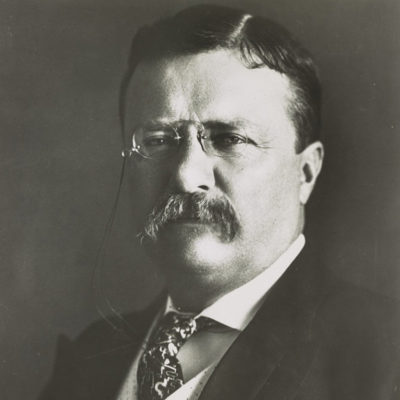 Theodore Roosevelt might not look much like a Teddy bear, but he is the namesake of the famous toy

The story of Roosevelt’s good sportsmanship quickly spread around the states. Cartoonist Clifford K. Berryman published a sketch of the scene in the Washington Post. His version of the bear was cute and a little less mangled than the real bear. The plush little guy appeared in Berryman’s Roosevelt-themed cartoons throughout the president’s term.

The Teddy Bear Is Born

Meanwhile in Brooklyn, New York, Morris and Rose Michtom were running a small candy store. Inspired by the story and cartoons, Rose Michtom fashioned a stuffed bear and placed it in the store window. She named it Teddy after Theodore Roosevelt. The Michtoms sent the Teddy bear to President Roosevelt for his children and asked permission to use the nickname for more of their stuffed bears. Not thinking much of it, Roosevelt gave permission.

And the Rest Is History

Teddy bears became a huge hit at the Michtoms’ store. The couple left the candy store business and devoted themselves to making stuffed toys. They eventually made a hefty fortune as such bears became a staple in American family toy boxes.

So, the next time you pick up a fuzzy-faced Teddy-friend, be sure to thank President Theodore Roosevelt, and remember the sad fate of that Mississippi black bear. You can read more about the American Teddy bear in the September/October 1998 issue of PieceWork. Even better, there is a pattern to sew one for your little Valentine (or for yourself)!