The Hidden Messages of Name Drafts

Weavers love name drafts. They’re fun ways we can hide special little messages in our weaving and create works of cloth with extra layers of meaning.

Close up of the project “Name Draft Runner” by Christina Hammel from the November/December 1997 issue of Handwoven. This particular draft was designed using the title The Random House Dictionary.

Weavers love name drafts. They’re fun ways we can hide special little messages in our weaving and create works of cloth with extra layers of meaning. Of course as Linda Ligon points out in this article from the November/December 1997 issue of Handwoven once you learn how to decode weaving you might not like what you find. —Christina

Name drafts are fun. They have all the intrigue of the secret codes we made up in grade school for passing notes. They give us unique weaving patterns without our having to be particularly original or artistic—only clever and persistent. They provide a way of investing our work with hidden sentiment, a way of commemorating special people, dates, or events. They offer no end of possibilities for drafting fun, with or without a computer. But watch out!

Remember back in the 1960s, when people were playing Beatles’ songs backward (I could never figure out quite how they did that) and hearing all manner of rude and evil messages in them? Isn’t it possible that our weavings could do the same? If words can turn into weave drafts, mightn’t weave drafts likewise turn into words? And might these words turn on us? You never know. 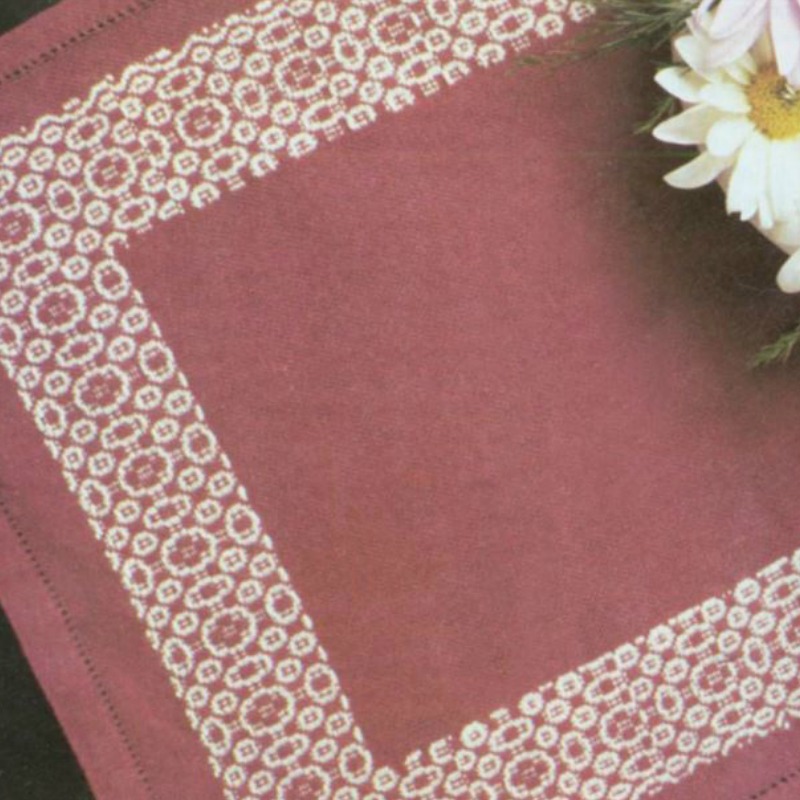 A name draft table mat by Peter Mitchell, woven using the name “Patricia Pommeroy Smith as a guide. Information on how Peter designed this mat and how to design your own name drafts can be found here.

After having this scary thought, I sat down with my good old Davison’s green book of every draft in the world almost, and doodled with the first pattern I ever wove. “Carol Porter” it was, a charming small novelty overshot. What jumped right out of the middle of it is a word I would have washed my children’s mouths out for using. Heavens to Betsy! And to think I’ve worn a hostess skirt bordered in that pattern to any number of festive dinner parties!

And good old honeysuckle twill. The nicest thing I could find in there was “crumb bum.” These lurking words are like the snake in the Garden of Eden.

Now, I don’t want to alarm you, dear reader—just to give you fair warning. Name drafting has all the hazards of slogan phone numbers, and more. Sure, some people have great numbers that translate into things like HOTWARP,” but what about those of us with numbers that, on examination, are unspeakable, or only dumb? (Mine, for instance, is MORPYFO. This has probably affected both my personality and the quality of sales calls I’ve had to suffer through for the past thirty years.)

But back to weave drafts. All the literature I’ve ever seen on the subject has been based on assigning the letters of the alphabet to four or more shafts. But what if you consider the hidden meaning of plain weave? A= 1, B = 2; C = 1, D = 2, and so on. In plain weave you could surely find the meaning of life and death, heaven and hell, and several pretty funny jokes. Just think about it next time you’re weaving tabby.

Featured Image: Close up of the project “Name Draft Runner” by Christina Hammel from the November/December 1997 issue of Handwoven. This particular draft was designed using the title The Random House Dictionary.