Have You Tried Weaving with a Puppy?

I'd like to think I can weave with pets in my studio, but it hasn't worked out that way.

Here is what I know about puppies, ten-week-old border collies to be exact: one minute, they are running at full speed in the yard with a rag in their mouth, and the next minute, they are leaning against your foot sound asleep. There doesn’t seem to be a medium speed.

Last week, we brought a little demon, I mean puppy named Deacon, into our house. It had been two years since our last dog passed away, and we had gone through the mourning stage and felt thoroughly ready for a new dog. Within just a few hours of him coming home, we had rolled up the rugs, moved everything that wasn’t nailed down to above puppy height, and resigned ourselves to full-time puppy duty. 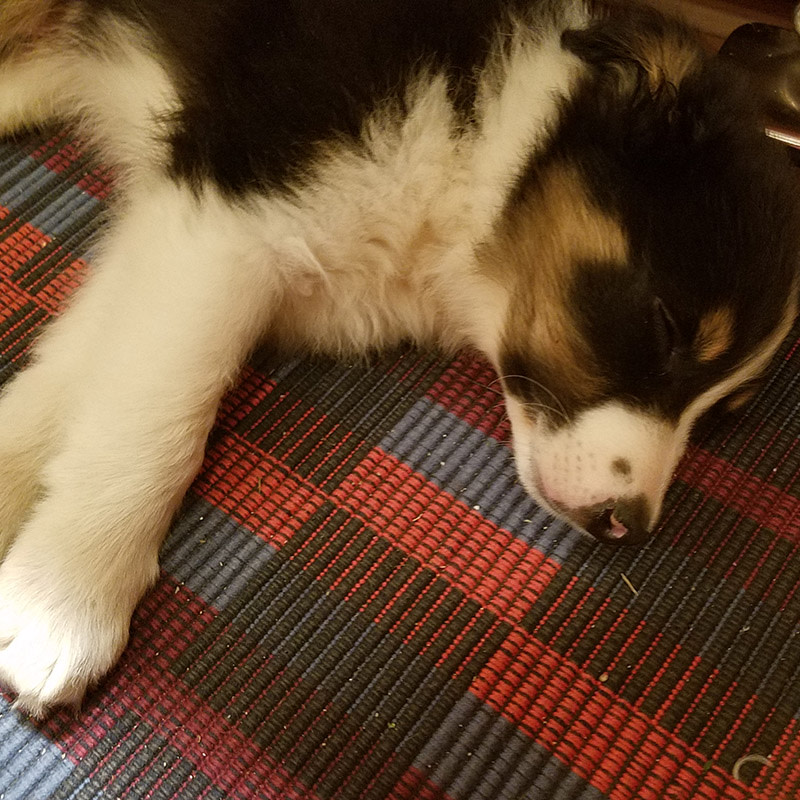 When you live with a weaver you get to take naps on handwoven rugs. (The rug has since been put away.) Photo by Susan E. Horton

Deacon has pretty much full run of the house, but there is one room he can’t go in, my studio . . . otherwise known as the spare bedroom. I know better because it still has the remnants of the last puppy that lived here: chewed shuttle bobbins, mini cones with chunks taken out of them, and a roughed-up kumihimo bobbin. On the Internet, I see a lot of pictures of people with their dog sitting peacefully next to them as they weave or their cat sleeping under the loom, but that hasn’t happened in this house.

• Hanging floating selvedges? Perfect as a batting toy.
• Feet moving on the treadles? Let me see if I can bite one of them as it moves.
• Yarn in a boat shuttle? I’ll just give that a little pull.

But here’s the crowning touch, and I can’t blame a puppy because it was Simon, the cat. I had two cones of blue Tencel labeled as the same color but could see that one was darker than the other, to the point that I checked the color name. And then, I took a whiff. Kitty pee. Soon I had only one cone of blue Tencel . . . although I kept the cat.

More power to you if you can weave with your pets. I can’t, but I’m pretty good at playing keep away.