You might think that yarn made out of banana fibers is a new thing but in fact it has been around for a long time. Liz Moncrief wove samples with it with great success.

Banana leaves became a fiber source around the thirteenth century in Japan, where banana was preferred to hemp for nautical ropes and ship’s rigging. Today, the fiber is used in a variety of products, including textiles and paper. Because of its strength and durability, Japanese currency notes are made from banana fiber, and some experts estimate that each note should last around one hundred years in circulation.

Beyond its durability, banana fiber is also more sustainable than many other weaving fibers. It requires fewer resources to grow than cotton, and its processing uses far less water than the rayon manufacturing process for Tencel or rayon bamboo. Banana is a bast fiber processed in the same manner as flax to linen and is biodegradable. Banana leaves and stalk casings can be harvested two to three times per year, so the fiber is considered annually renewable.

Banana fiber comes from the outer sheath formed by the leaves that grow around the trunk of the plant. Sheaths are cut into strips and fed into a machine to extract the fiber and remove the pulp. The fiber is then dried in the sun, bundled, and sent for processing. The filaments themselves are 5 to 10 feet long. Depending on the age of the leaves (determined by how close they are to the trunk), there are varying degrees of coarseness in the fiber. Some fibers are soft and fine enough to use in textiles such as kimonos, while the other fibers are coarser and more linen-like. The plants are grown on plantations in the Philippines.

(1,968 yd/lb, 984 yd/8 oz cone, 100% banana bast). The yarn I worked with is available from Bellatrista at www.bellatrista.com. It is somewhat harsh and stiff at first but softens after washing. Additional washing will continue to flex the yarn a bit but not to the point where it would be suitable for clothing or next-to-the-skin wear. For this reason, I didn’t put the yarn through the usual sampling for drape, gloss, or some of the other qualities that we look for when testing a new yarn for scarves or garments. Instead, I believe that this yarn is best for nonclothing uses and focused on weave families generally assigned to table linens or other household items.

Setts: 20 epi, 24 ppi
Shrinkage in length: 4%
Shrinkage in width: 10%
Because this yarn does not full after washing, and waffle weave has long floats using eight shafts, I decided to try a fairly tight sett. I’ve been a soapmaker for a long time and am always thinking about ways to pair a gift soap with something from my weaving world. This yarn makes a wonderful natural scrub cloth for your face and body. In fact, this sample is a twin to the one that went directly to my shower and gets daily use as a washcloth. You could also consider weaving a soap bag, which is used as a scrub cloth with the soap bar inside. 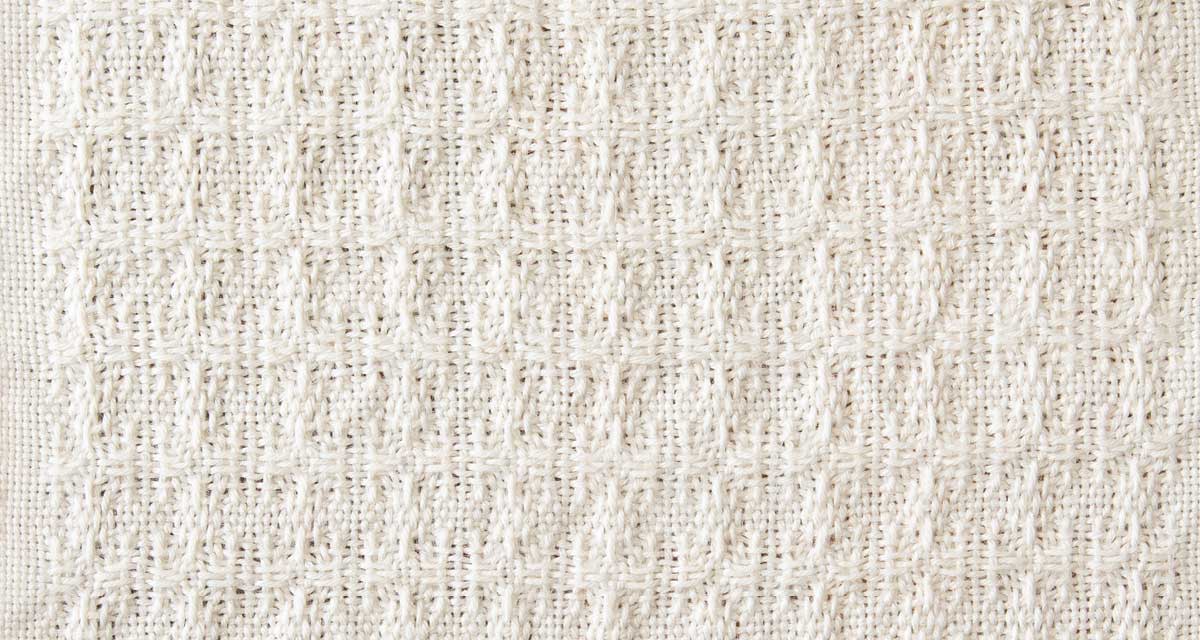 Setts: 18 epi, 24 ppi
Shrinkage in length: 4%
Shrinkage in width: 10%
I wanted to try lace for the second sample to mimic a linen dresser scarf because the banana fiber is so similar to linen. The huck lace works well here, and the floats are not bothersome in a nonwearable item. The weave structure is well- defined after washing and ironing. I did not try a hard mangle on it, as Laura Fry might suggest, but that might flatten the cloth to the point that it would exhibit a hard shine. 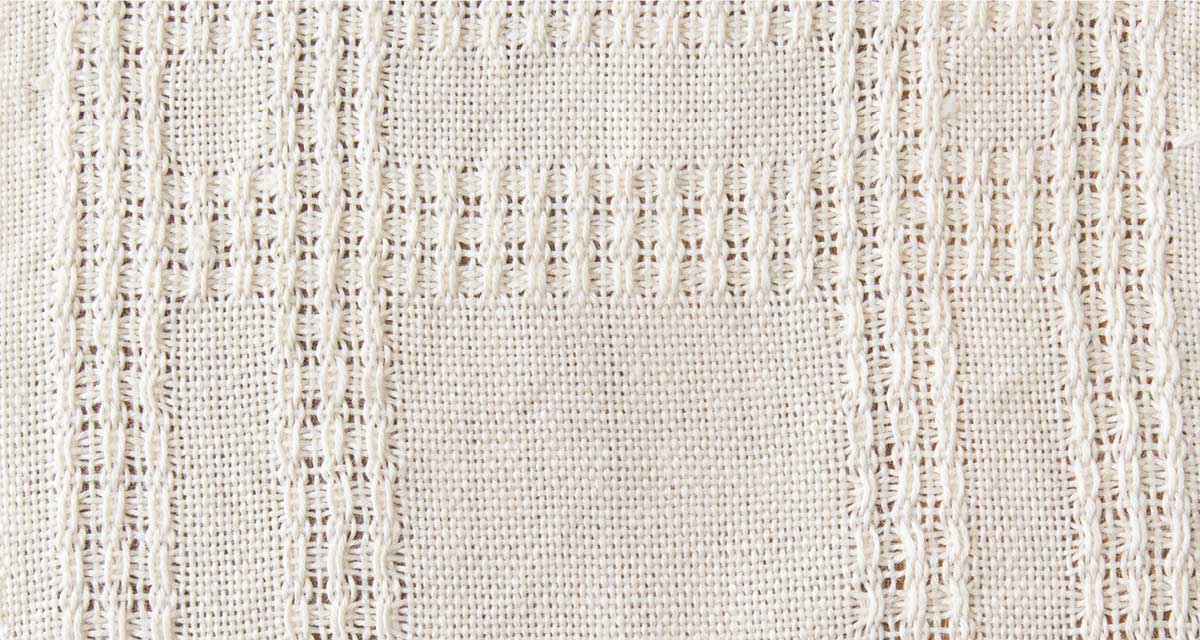 Setts: 18 epi, 24 ppi
Shrinkage in length: 4%
Shrinkage in width: 10%
Again, I wanted to direct this bast fiber toward the linen genre, so I tried a block summer and winter draft. I used the natural-colored yarn for warp but dyed enough yarn for a blue weft using Procion fiber-reactive dyes with my usual dye process using soda ash and urea. The yarn took the dye well with no bleed-out, and I believe that the soda ash, because it is caustic, may have softened the yarn a bit. There could be cellular breakdown with the soda ash, but I did not investigate further. The softness was a nice surprise and would be a benefit if you prefer to dye your own yarns. 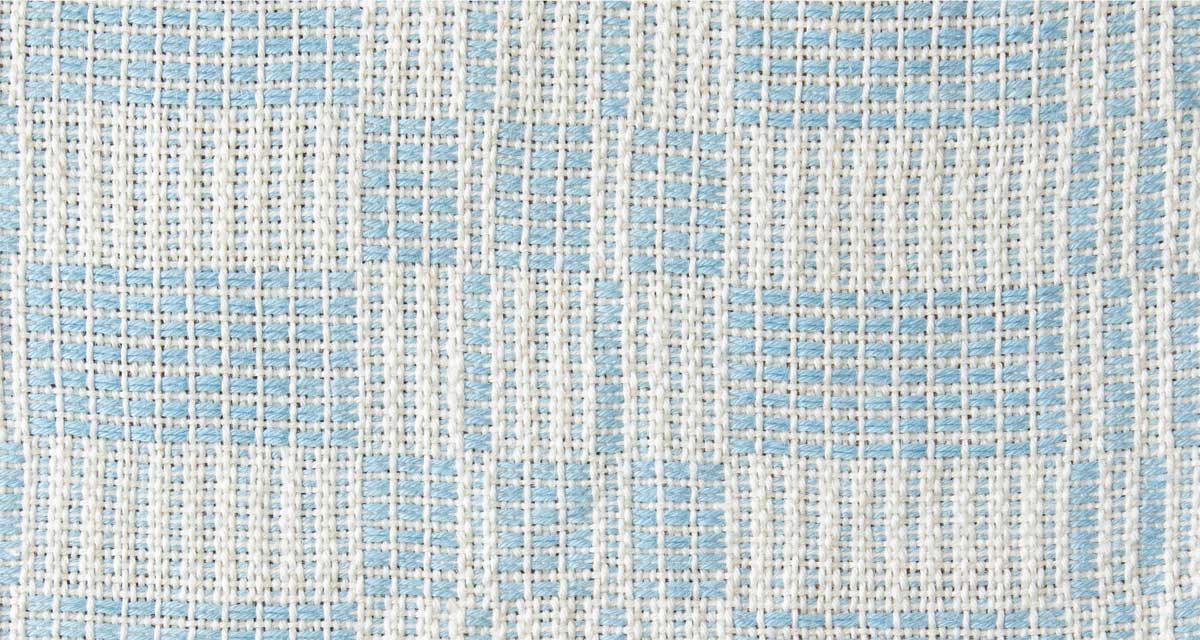 My Banana yarn samples washed well in the washing machine, but the dryer set in hard wrinkles that were difficult to iron out. I live in the northwestern United States, and my well-ironed samples quickly reabsorbed moisture just sitting on the counter. In the shower, however, the waffle-weave cloth is pure delight. I’d love to hear about other readers’ adventures with banana yarn and other uses for it.