Linda Ligon: This is How I Go When I Go Like This

One of the best parts of working for Handwoven is getting to know and learn from Interweave founder Linda Ligon.

One of the best parts of working for Handwoven is getting to know and learn from Interweave and Long Thread Media founder Linda Ligon. For all of you not so lucky to have a direct line to Linda, we thought it would be fun to publish some of her essays on the web. This first one comes from the March/April 1994 issue of Handwoven. _~Christina

I try to keep up, I really do. I've listened to the rap music, scrutinized the grunge, tried to make sense of My Cousin, My Gastroenterologist. When one of my sons gave the other some "alternative" comic books for Christmas, I dutifully read one and struggled to find the humor in a beerguzzling, foul-mouthed third grade dropout in a pointy hat whose conversation consists largely of "I hate you" and "Eat some paste."

It actually was pretty funny, in an existential way, and a line from one panel stuck in the back of my mind—a bit of nonsense waiting for a meaning: "This is how I go when I go like this." This loony mantra had me doing little shuffle dances around the kitchen, striking slightly odd poses while waiting to cross the street at traffic lights, and engaging in various other regressive motor behaviors for several weeks (when no one was looking). And at some point I began to "get it."

Like when I tried to teach my daughter over the telephone how to make pie crust. The easy parts to tell, such as how much flour and how much shortening, are almost beside the point. The steps that make all the difference—when you've cut the ingredients together sufficiently, how much water to add depending on the relative humidity, how firmly to gather the dough together, how to do the feathery little strokes with the rolling pin—these do not yield easily to language. Your hands and eyes learn from the ingredients how they should feel, how they should look. Or else you learn while watching your mother, who will tell you in essence, "This is how you go when you go like this."

The gentleman who cuts my hair learned his craft in Europe as an apprentice, not in a beauty school, and the first three months of his study consisted of keeping his mouth shut and watching. Then he was given a pair of scissors and told to do a haircut, perfectly, "or else." You don't discuss your haircut with this fellow, and you don't always like the one you get, but you can be sure it is precisely crafted. His hands know the job, and they learned it from his eyes.

I worked at spinning cotton with a charkha off and on for years with unsatisfactory results. I had read all about the fiber and the amount of twist necessary to make a sound yarn, and I understood the mechanics of my little spindle wheel. But my yarn was consistently inconsistent, with soft spots and over-twisted kinks, until a great spinning teacher literally took hold of my wrist and gave it a little flip at the end of a draw while the twist ran into the yarn. 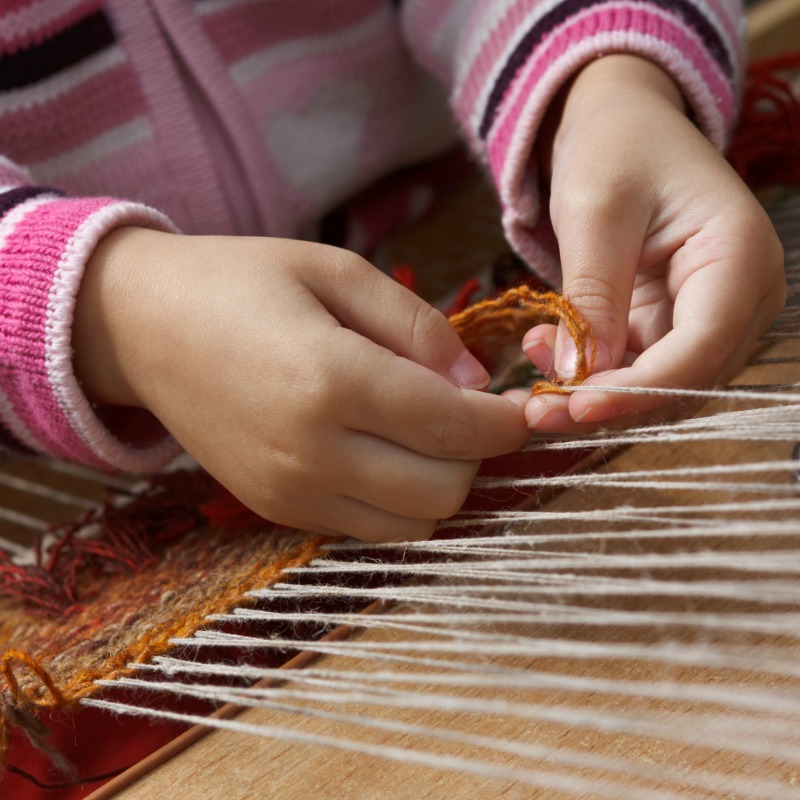 Not everything in weaving can be learned from a book, sometimes the best way to learn is to watch other weavers. Photo credit Getty

She could not have told me in words how to do this. My wrist learned from her hand; it was that subtle and that direct, and it made all the difference. Deborah Chandler (author of Learning to Weave) and I have been working together on a revised edition of her book to celebrate its tenth year in print. A major part of the work is the addition of a chapter on warping from back to front, and in trying to distill a general method to present, Deborah has talked with a lot of different weavers and watched them perform this basic task. The obvious steps are easy to quantify and write down—but not the small fleeting motions, the ones a weaver doesn't even know she's doing, that make the difference between a smooth, speedy process and a clumsy one, between a good warp and a troublesome one. So how do you convey those subtleties in print? It boils down to "This is how you go when you go like this."

Of course, much about spinning and weaving can be measured, recorded, and followed like a recipe: threading and treadling sequences, ends and picks per inch, grist, twists per inch, yards per pound. But those elements alone don't make great yarn or great cloth. It's the hand skills, the eye-hand response to the materials, the touch that set excellent handmade yarns and fabrics apart from machine-made ones. And learning those skills—when to stop fulling a handwoven fabric, how taut a closely set linen warp should feel when you pat it, how much resistance you exercise before letting a given spun fiber wind on the bobbin—are all very particular to the job at hand, and all highly self-referential.

I don't think the artist who created our obnoxious young character had any of this in mind when he wrote his catchy little conundrum. But it fits, don't you think?