This step-by-step tutorial on how to fix a broken warp thread on a rigid-heddle loom will teach you to quickly and easily fix these pesky weaving problems.

Even the most careful weaver breaks a warp thread every once in a while while rigid-heddle weaving. Breaking a warp thread when weaving on your rigid-heddle loom can be frustrating, but fortunately it's easy to fix! This step-by-step tutorial on how to fix a broken warp thread will teach you to quickly and easily fix these pesky weaving problems. 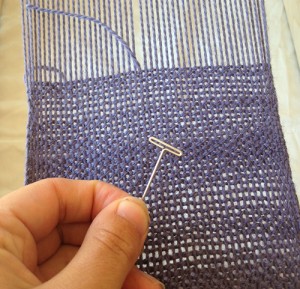 This is a T-pin--it's your best friend when fixing a broken warp thread. 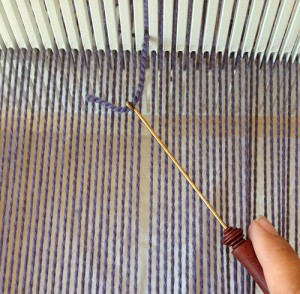 Pull one end of your replacement warp thread through the slot or hole that the broken warp thread was originally in.

3.Place your T-pin in the woven cloth parallel to the weft threads so the top of the "T" is roughly where the broken thread was in the warp about an inch down from the fell (the edge of the woven fabric). Attach your replacement warp thread to the top of the T-pin so the new thread lines up with the empty space in the warp left by the broken thread. Some folks ask you to wrap the thread around the T part of the pin and say you shouldn't knot the yarn--but I've never had a problem with using a combination of a few wraps and a knot to keep it in place. So long as the yarn doesn't slip off you should be fine! Also, the new thread doesn't need to line up exactly, once you start weaving again it will move into position. 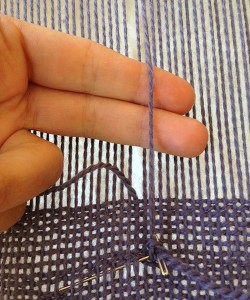 The T-pin is in the cloth about an inch from the fell and the replacement warp thread is carefully attached to it. 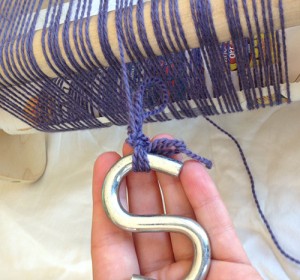 The repalcement warp thread is wound into a butterfly and tied onto an S-hook. The weight of the hook will keep the thread tensioned. As you advance the warp you'll need to release more of the thread from the butterfly and re-tie it to your weight.

That's it! You can see that once a few picks are woven it looks just like new! Just remember to remove the T-pin (or, if you're like me, T-pins) from the cloth before wet-finishing and to snip off the broken end and the tail or the replacement. Quick, easy, and (unless you poked yourself with the T-pin) completely painless!