What are the advantages of an end-feed shuttle over a boat shuttle? Are they worth purchasing?

I’ve never used an end-feed shuttle, nor have I seen one operate. But people who write about them speak very favorably of them and wouldn’t go back to a boat shuttle because they say end-feed shuttles make better selvedges due to the tensioning mechanism within them. However, when I weave on a well-tensioned warp and with a tightly and evenly wound bobbin, neat selvedges happen automatically. I do not have to “fiddle” with them to make them neat. However, I am curious about end-feed shuttles and every now and then I think about purchasing one. But before I make this expensive outlay, what is your opinion?  Does an end-feed shuttle have an advantage over a boat shuttle that contains a well wound bobbin? If so, what is it?

End-feed shuttles have a tensioning device, as you mention, that can be adjusted to give the exact amount of pull on a weft thread that is needed for the weft to turn smoothly around the edge warp thread. Usually, end-feed shuttles are a bit larger than typical boat shuttles and a little bit heavier. The advantage to using one is the tensioning device as you point out. You do have to wind the pirn (the end-feed shuttle’s “bobbin”) correctly. The weft thread is pulled off the end of the pirn. If you were pulling the thread from the base of the pirn, you could potentially pull off all the wraps of thread on the pirn. So you have to wind the base of the pirn first, back and forth for an inch or so, then move up an inch and wind, and continue so that the last part you wind is on the tip of the pirn, the part that gets pulled off first.

One disadvantage to using an end-feed shuttle (besides its greater cost and its greater bulk, which you could think of as a good thing or not, depending), is that the thread pulls from the shuttle farther from the weft turn on one side of the warp than on the other, which causes a slight difference in the degree of pull on the weft  (you don't turn the shuttle around when you weave; you keep it in its same orientation). You therefore have to set the tensioner so that it pulls a teeny bit too much on one side and a teeny bit too little on the other (not usually that much of a problem). Another disadvantage is that the weft thread gets twist added to it as it is pulled off the pirn (the way twist is added if you pull thread from the end of a tube rather than from a rotating tube). This can be a problem if you are using  a singles or energized yarn. 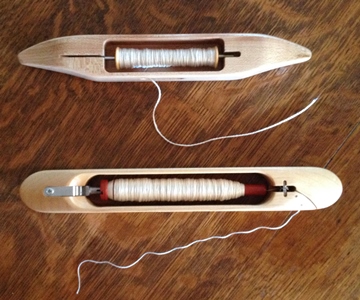