Tommye McClure Scanlin writes about how she uses the help of chance to kickstart her creativity.

Tommye assigned different shapes and colors to each side of a die and used those results to create her tapestry diaries. Photo credit: Tommye McClure Scanlin

Have you ever felt weighed down knowing you must make a design decision before you can start the next weaving and yet feeling unable to begin because of the seem¬ingly endless search for the right design option? Consider this: Let serendipity help you move ahead. “Wait,” you might ask, “If the act of designing means planning, while serendipity is a happy chance accident, how can these two opposite concepts come together in a useful way?” I’ve found an approach for enriching design op¬tions by occasionally turning things over (somewhat) to chance. No, it’s not the same level of risk as jumping out of an airplane or investing in an unproven ven¬ture—but it might feel like a leap that big when you think about changing up ways to plan designs.

All weavers have been in this same spot, facing the dilemma of how to choose from many possibilities. What if you could set up a system for decision-making that allows you to move forward without agonizing over whether you’re creating the best and only design suitable for a project? Sometimes I use a process that takes the design decision slightly out of my hands and lets serendip¬ity play a role. I find that once I start letting chance help out, ideas begin to flow. Instead of only one possible “perfect” design choice, I’m able to create several good options that may turn into many projects.

Even though the objective is to add an element of chance to the design process, it helps to have a few rules for proceed¬ing. First, set limits on colors, shapes, textures, or types of yarn to be used. Next, decide on your “chance maker”: for instance, will you use the toss of a coin or the throw of a die? 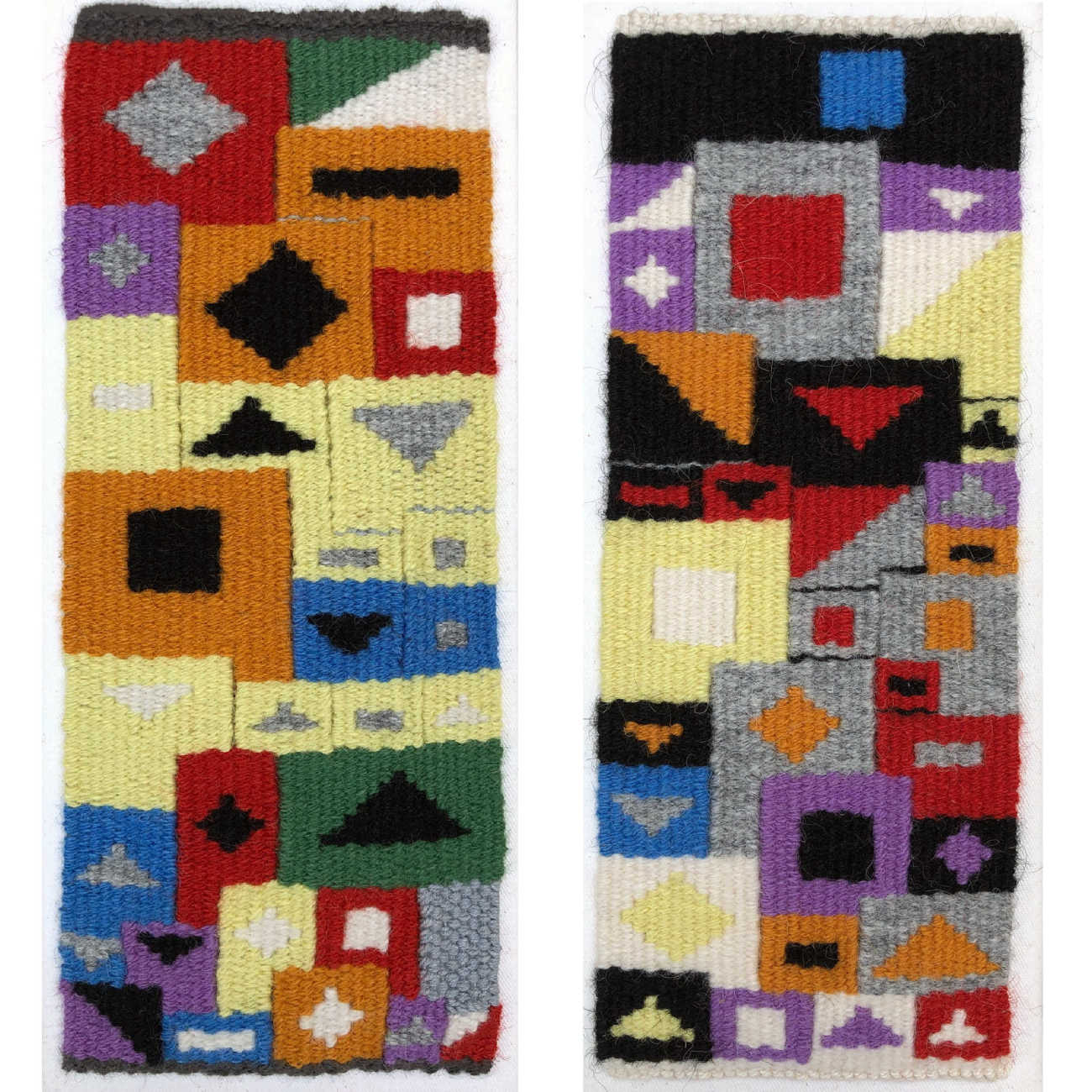 Tommye’s tapestries diaries from July 2011 and August 2011. All were woven in wool and cotton. Photo credit: Tommye McClure Scanlin

One year, I used throwing a die to determine what I’d be weaving each day for four months of small weavings I called my “tapestry diaries.” First, I decided to use primary and secondary colors of wool weft, with each color denoted by the pips on each face of a six-sided die: red=1, yellow=2, etc. Next, I decided on the shapes to be woven with each shape represented by a pip. I chose six simple “weaverly” shapes: square, rectangle, triangle, inverted triangle, diamond, and a diagonal from one side of a small area to the other. Lastly, there needed to be a background for the shapes and colors.

I chose to use only three options for that: black, gray, or white. A throw of either 1 or 3 was black; 2 or 4 became gray; and when 5 or 6 turned up, I used white. For instance, if the die throws consecutively showed 1, 5, and 3, then a red (1) diamond (5) shape was woven on a black (3) back¬ground. I was able to vary this approach in four different ways, and these small tapestries represented June, July, August, and September of my 2011 tapestry diary. 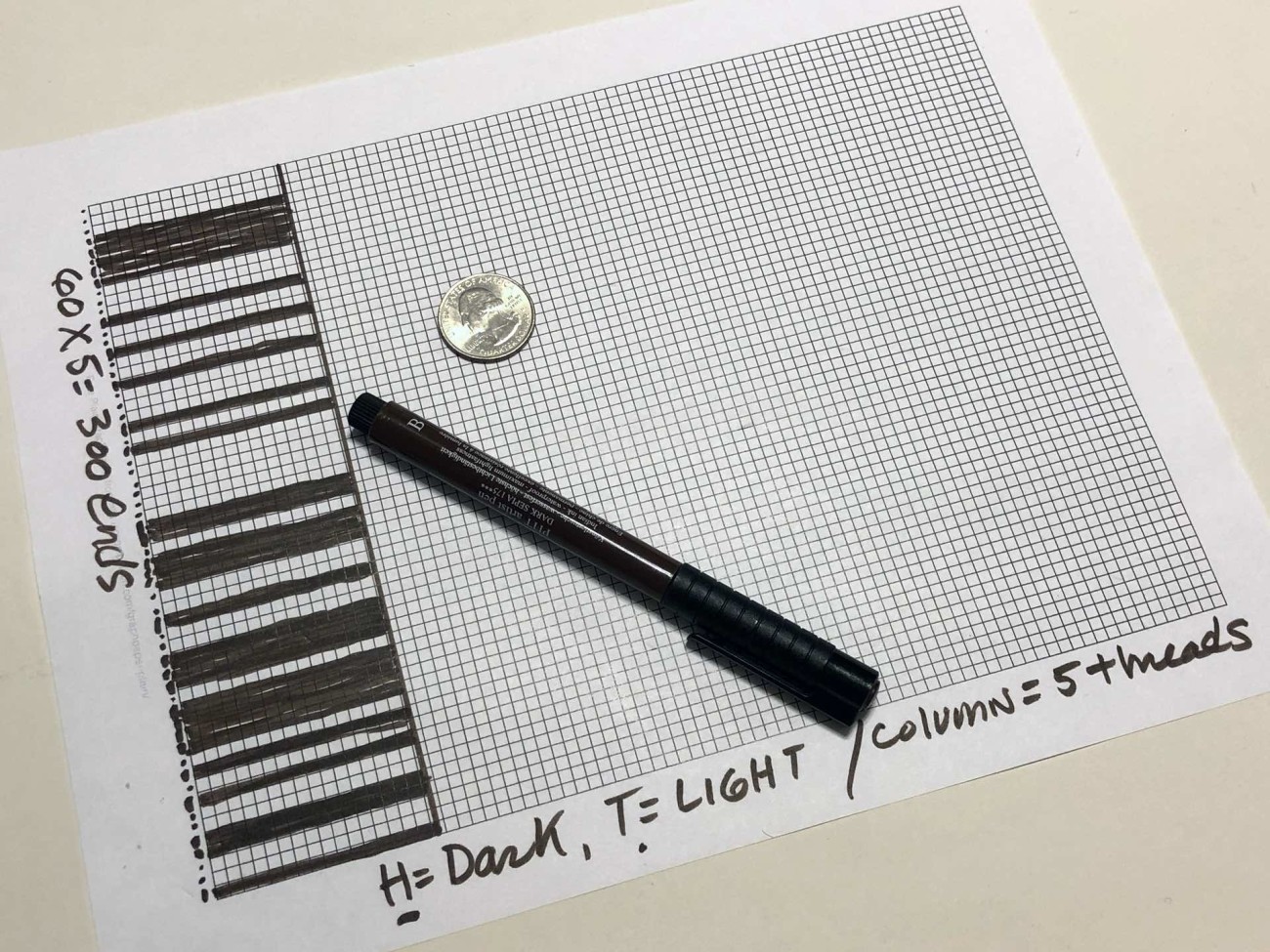 Planning stripes through the use of a coin.

I’ve used this method several times and have found it to be an interesting way for allowing chance to give me a new way of choosing colors and shapes. The method also works for other kinds of weaving. Indeed, almost any kind of making can benefit from sometimes turning over the results to chance.

Another way that I’ve occasionally turned the design process over to serendipity is by using a series of numbers representing selected hues to determine the color choices in boundweave. I put slips of paper in a little box with a number for each color written on them; each time I wanted to change weft colors, I’d draw a number and move along with the weaving. I used a small number of hues (red, yellow, and blue, plus charcoal gray as a separating color) but with tint, tone, and shade differences for each so that variations were possible. If I drew a number associated with blue, for instance, I’d decide which value and tone of blue to use, basing my choice on the visual effect building in the weaving.

I’ve used a similar approach when designing stripes by having coin tosses as the determining factor for stripe width, color choice, etc. Using grid paper, I can assign the number of columns (representing number of threads, parts of inches, etc.) I want for a stripe of a certain color, based on a change made when the coin toss is different. Let’s say I let each column equal x number of threads or a certain stripe size; perhaps each column represents 5 threads. I flip a coin; heads turns up several times in a row. The 5 threads are then multiplied by the number of times the coin flip is the same. And the reverse would happen with tails as the resulting face of the coin.

These are a few of the ways I’ve found to occasionally turn the endless possibilities of design decisions over to chance. After all, it’s still the weaver/designer who’s creating the circumstances within which those seemingly random choices are made!

Make a Cartoon and Use It for Tapestry!

Using a cartoon for tapestry and other figurative weaving is a time-honored technique. Here's how Tommye McClure Scanlin does it.