Dancing with Your Loom

Changing your tie-up and treadling so that you can walk your treadles may make you enjoy weaving more and may also be better for your body.

Liz’s treadles are labeled so she can better walk her treadling. Photo by Liz Moncrief

The subject of treadling comes up in my workshops, and I confess I’m usually the one to raise the issue. It surprises me when I see students treadling in the manner that they learned as “traditional” because it didn’t occur to them that there may be a better way. The method that I use has been around for a long time, though it doesn’t seem widely known.

Before I get into specifics, I want you to first think about ergonomics. Our bodies are well-balanced, and the pelvis is constructed for smooth movement of the legs. The hip joint rotates enough to give an adult a comfortable stride of 10 to 20 inches forward, backward, and to the side. Now this may sound basic, but if you consider your walking cadence, you don’t walk forward with your left foot for three steps and then your right foot for the same number of steps. Yes, it’s stating the obvious, but I see weavers on floor looms doing this very thing.

Your left foot starts on the far-left treadle, which you’ve designated as treadle 1, with the next as treadle 2, and so on. In the case of a six-treadle loom, you’re treadling 1, 2, 3 with your left foot working from the left toward the middle, and then your right foot takes over at 4, 5, 6 from the middle working toward the right.

This sort of movement does many things, and few of them are good. I challenge you to put a sample warp on your loom and go through these motions to see them in action.

Now that I’ve identified some of the issues that can result from the traditional treadling method, let me see if I can talk you, or perhaps walk you, through making some changes. I’ve included a photo of the treadles on one of my looms with numbers taped on them. Don’t worry, it’s painter’s tape and is easily removed. I’ve used up to ten treadles, but here is a version for six treadles. 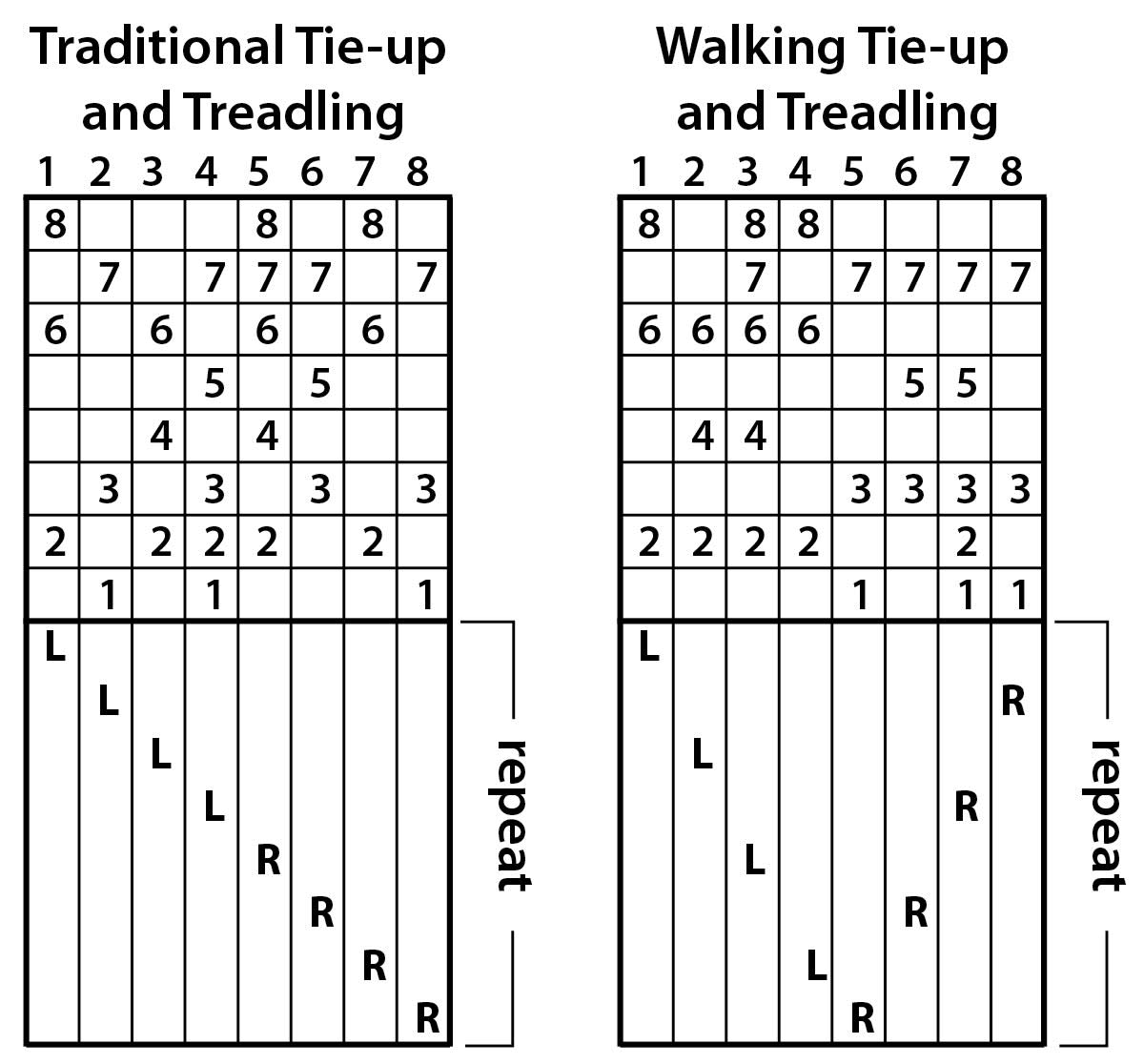 The tie-up and treadling for Andrea Williams’ draft (pages 36–38 in this issue) with both the traditional tie-up and then modified so the treadling can be walked.The treadle order was started on the outside left in the walking example.

Try a simulation of this walking method as you look at the photo. Pull out a favorite draft with a treadling sequence and step your feet in this manner starting at T1. If you happen to be treadling a 2/2 twill on four shafts, 1-2, 2-3, 3-4, 1-4, you can save yourself some weight-bearing movement by treadling a left treadle with shafts 1-2 and then shift smoothly to a right treadle for shafts 2-3, left for 3-4, right for 1-4. You have only one new shaft to lift on each consecutive treadle.

The point is to make your treadling as rhythmic and balanced as possible. Check out the great YouTube video presented by Jette Vandermeiden who demonstrates the “walk,” and see if this method improves your loom time. As author and weaver Kati Meek would say, “Treadle with joy.”