You may not be familiar with double corduroy but after seeing this rug, you may want to be!

All photos by Sarah Hilditch

When Sarah Hilditch sent us pictures of her Crater Rug we were intrigued. A beautiful pile rug with a striking design that didn't require tying individual knots seemed impossible. Here's Sarah talking about her design and weaving process. - Susan

I recently graduated, as a very “mature” student, from Bradford College, United Kingdom, with a Higher National Certificate (HNC) in Fashion and Textiles, specializing in weaving. The Crater Rug forms part of the collection created for my final assessment. I based my design on a drawing I made of a crater photographed from space by the NASA Juno space probe. I loved the intense oranges and blues in the photograph, and I wanted to re-create something using that color palette.

I started making knotted rugs as a small child, helped by my mother and grandmother, who both made many Patons and later, Readicut latch-hook rugs.

When I started to work on my final project, it was in my mind to try to create woven rugs, but it was not until I read The Techniques of Rug Weaving by Peter Collingwood that I realized it might be possible to “weave” pile rugs. I knew about pile rugs made using rya or Ghiordes knots, but both methods are very slow, and I needed a way to speed up the process. I had to have at least one full-sized rug and several samples ready within just a few months, while still managing to hold down a full-time day job. 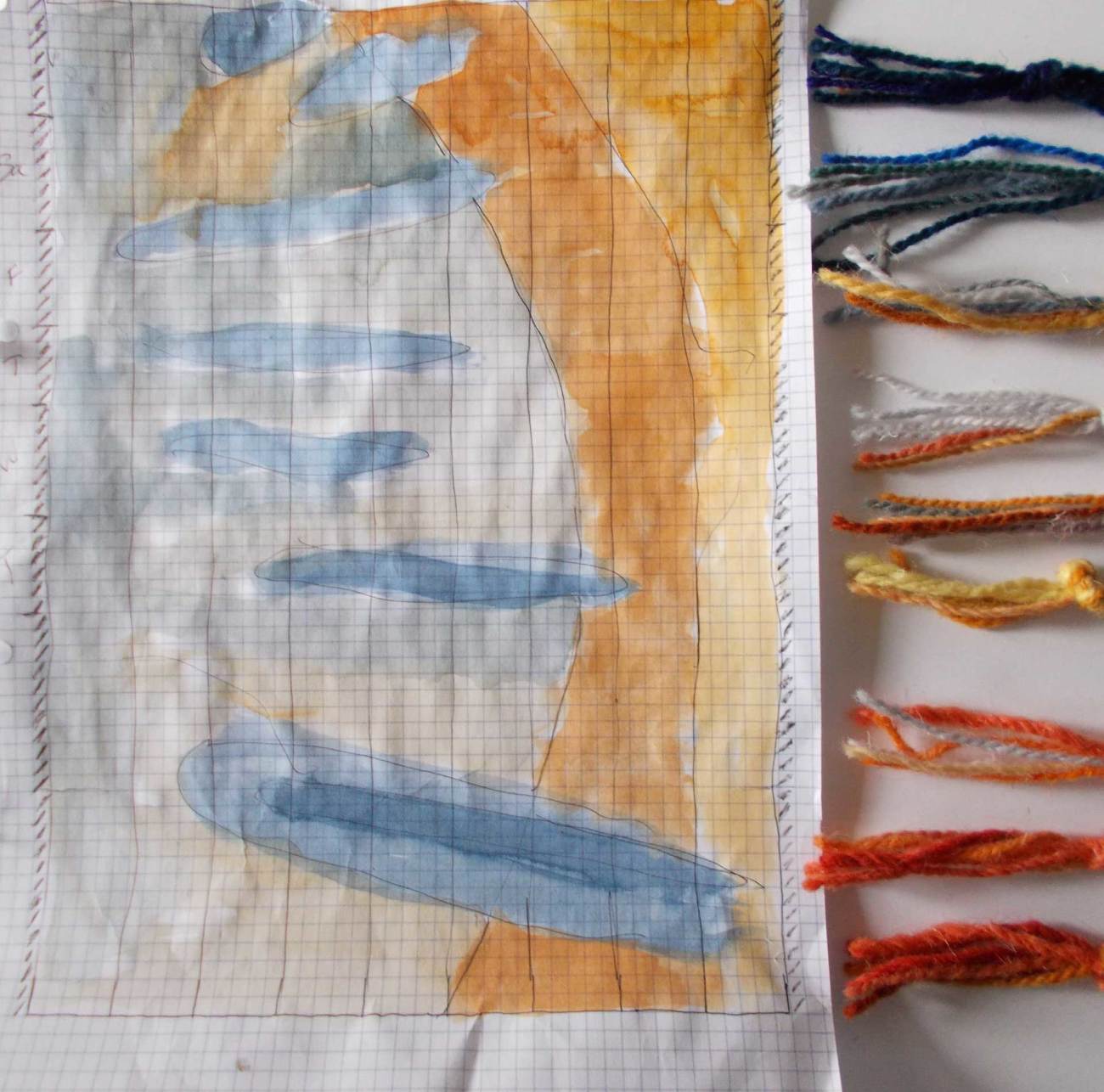 As I read the chapter on double corduroy in Collingwood’s wonderful book, one phrase in particular made me sit up and take notice: “With practice, a 3 foot × 5 foot rug can be woven in two days.” My experience with knotted pile told me that this wasn’t possible using knotted methods, so I decided to try double corduroy. The pile it creates is shaggier and less dense than the sort made using traditional Ghiordes or rya knots. Being a child of the sixties, I remember a time when rugs like this could be found in many people’s homes.

This rug took me longer than two days, partly because, at least initially, I lacked the skills needed but mainly because adding an abstract pattern makes the process slightly more complex and time-consuming.

Double corduroy is not suitable for detailed patterns and designs, but for large shapes like the ones I have created, it is versatile enough to give excellent results. Having sampled and worked out that two full repeats of the treadling’s six picks gave 1 inch of woven rug, I was able to draw up a chart that could be used to re-create my design. In my chart shown below, the small vertical squares each represent 1 inch. I divided the width into nine columns because there were nine repeats of the threading.

Double corduroy is woven on four shafts. Refer to Figure 1 to see the threading, which resembles an advancing twill. Figure 1 shows one repeat of the threading, which can be repeated as many times as required to give the desired width. For simplicity, I recommend designing using whole repeats. Partial repeats on an edge require that you weave that side in a different way, slowing down the process. For my rug, I sleyed nine repeats of the threading in a 5-dent reed for a total of 180 ends and a width of 35 inches. My warp was 3 yards long, which allowed 10 inches for take-up and 40 inches for loom waste. I used a strong unbleached 5/7 cotton of the sort normally used for woven rugs. Note: The 5/7 cotton is not commonly available, however, 8/4 carpet warp used doubled will yield a similar-sized thread. 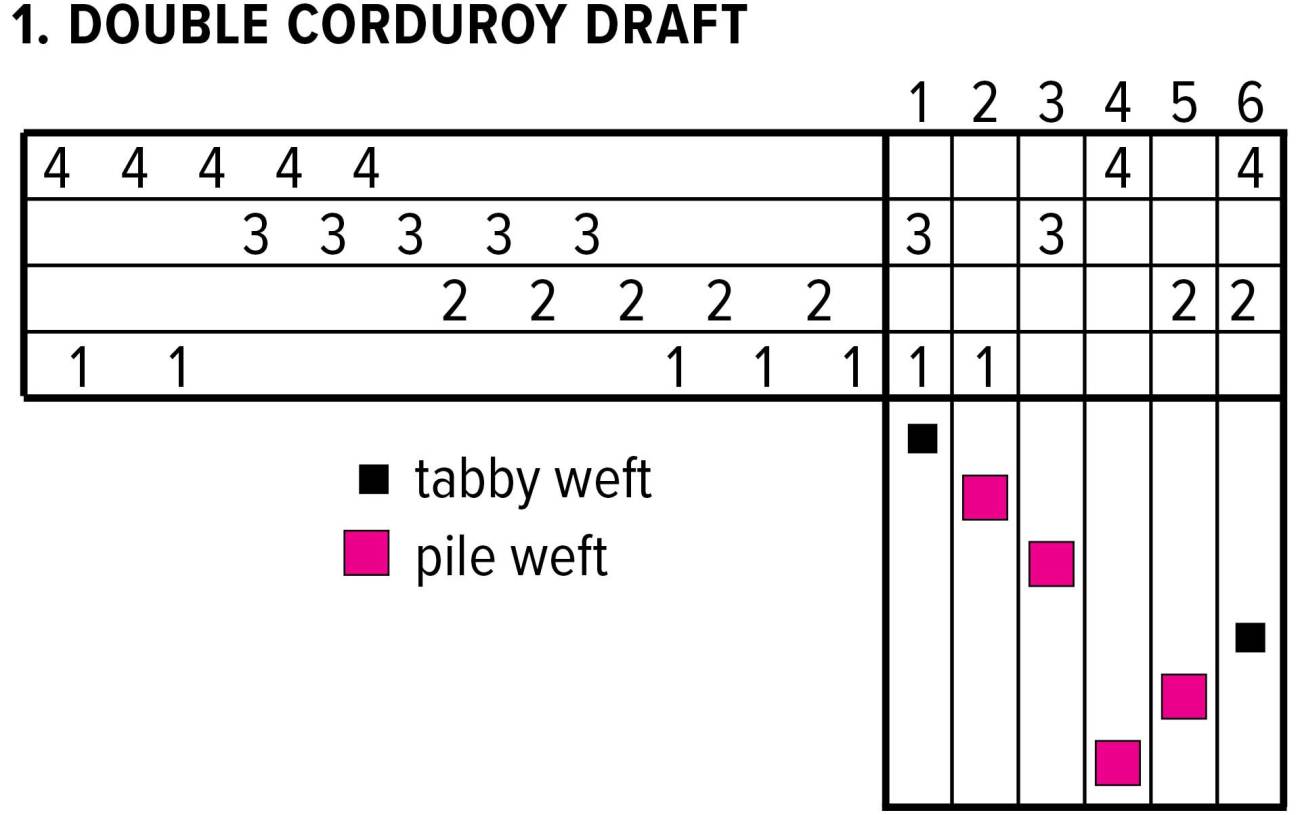 I used two wefts: The pile weft was two-ply Axminster rug wool used sixfold, and the tabby weft was a single strand of strong four-ply brown rug wool. Axminster rug wool is 80% wool/20% nylon and comes in a wide range of colors. It also comes in three sizes. I used the thin size, which yields about 612 yards per pound (see Resources). For the four-ply rug wool, I used a yarn I spun myself, but any strong three- or four-ply rug wool would work. For my rug, which I wove to 60 inches on the loom, I needed about 300 yards of the tabby weft and 1,800 yards of the pile weft. I started and ended with hem allowances using only the tabby weft. When the rug was off the loom, I folded and pressed the hems and handstitched them. Off the loom, my rug is about 33 by 55 inches. 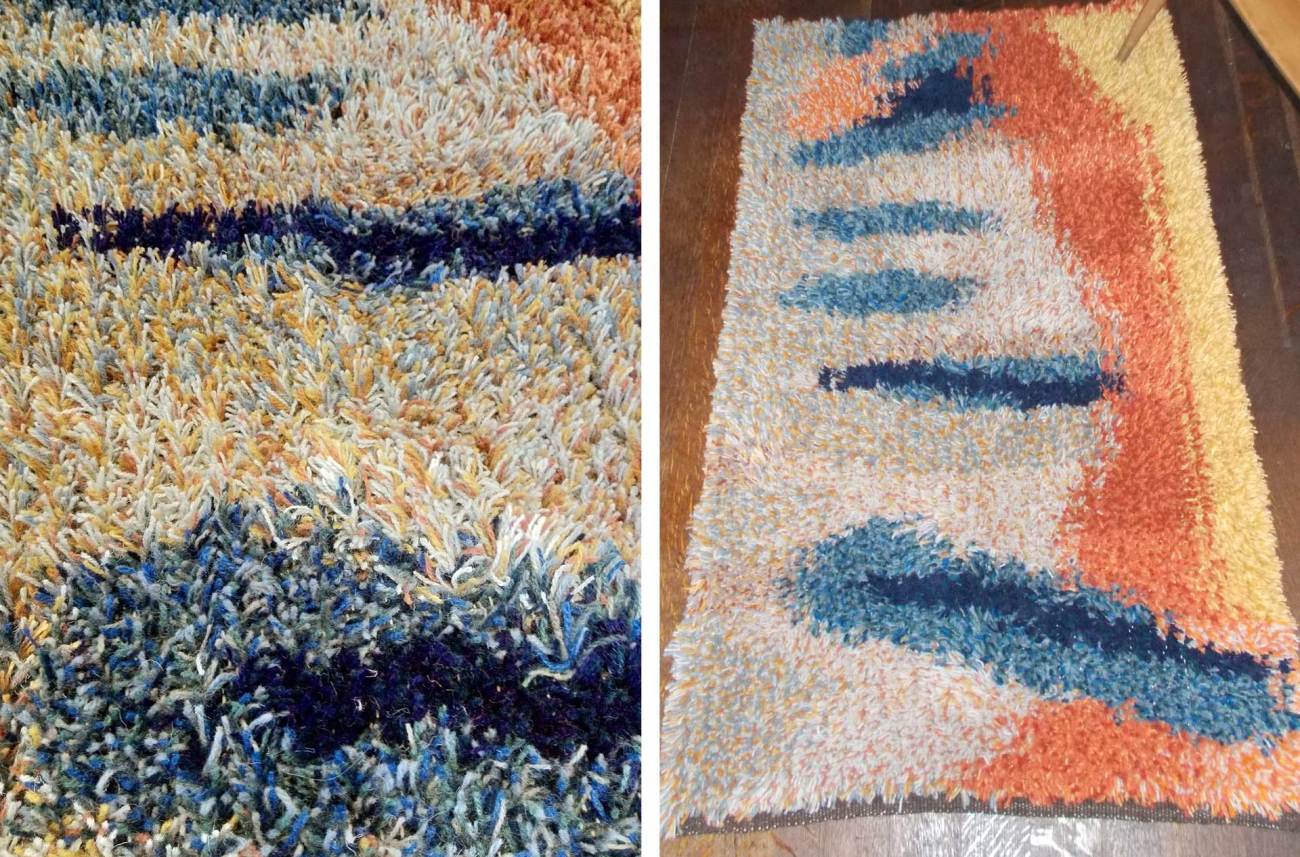 The treadling is a six-pick repeat, with one pick of tabby followed by two picks of pattern weft and then another pick of tabby and two more picks of pattern weft, as shown in Figure 1. As you weave, you are creating a series of long weft floats of pile. To cut the floats into pile, you need to separate them from the tabby using a strong stick before cutting. I did so by inserting a thick knitting needle under the floats and cutting the floats in half. I found that it was best to cut the floats after every 3 to 4 inches of weaving for ease of inserting the knitting needle. Collingwood suggests using a special tool and a sharp blade, but I am not fond of sharp blades, so I ended up using a pair of ordinary dressmaking scissors!

The beauty of double corduroy is that because the weft is inserted sixfold (or more if desired), it allows for different-colored strands to be combined as desired. This makes it possible to create shading simply by changing the number of strands of a given color in the six-strand mixture. I wove my rug following my template, inserting the various colors by eye based on where they appeared in my drawing. Unlike knotting, this is a much more freehand method that leaves a good deal to artistic license. I was pleased to see that even very slight changes in the combination of colors were visible in the finished rug, giving subtle areas of shading. 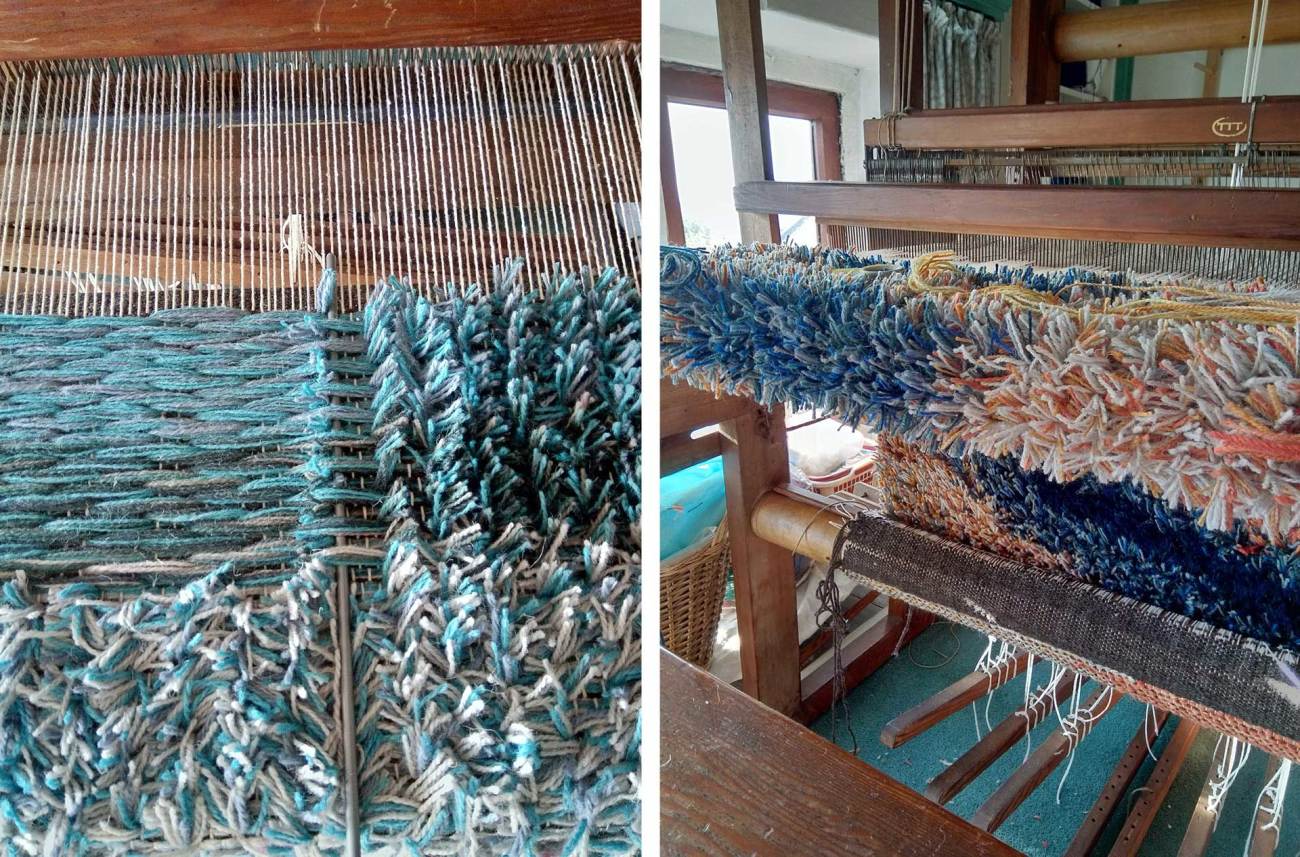 Left: Separating the pile from the plain-weave ground cloth in preparation for cutting; Right: On the loom

I thoroughly enjoyed discovering this technique, and I continue to weave double-corduroy rugs. I am using natural wool and more geometric patterns in the hopes that they may be easier to market.

SARAH HILDITCH lives in Lancashire, England, and runs a small flock of rare-breed sheep. She is a member of the Bowland Guild of Weavers, Spinners and Dyers. A supporter of the Campaign for Wool, she uses this locally sourced, eco-friendly, sustainable, naturally fire-retardant fiber to create bespoke textiles and floor coverings, which she sells through her website handmade-at-harcles.com.