Block weaves are structures in which groups of warp and weft threads can produce two different-looking interlacements, one that identify as “pattern,” the other as “background.”

I have some questions about definitions.

When we weave a straight twill, or a reverse twill, or a rosepath or bird’s eye twill, or whatever other kind of twill that relies on a twill sequence, we just call it a twill. I don’t see anywhere in the literature that it is referred to as a block weave, But when we use a twill sequence on top of a plain-weave ground cloth, as in overshot, we do call it a block weave. Some writers give the definition of a block weave as (to paraphrase) a group of threads that act together in their threading and treadling to produce one unit of design. Well, rosepath (among others) does that and we don’t call it a block weave. Other writers say a block weave is a weave structure that produces a pattern area and a ground area. Well, any twill pattern will do that, or you wouldn’t recognize it as any pattern at all. Simply put, why is overshot a block weave, and rosepath not?

The key difference is in the words “group of threads.” Block weaves are structures in which groups of warp and weft threads can produce two different-looking interlacements, one that identify as “pattern,” the other as “background.” Turned twill is a block weave in which four warp threads and four weft threads can weave either 3/1 twill or 1/3 twill. If some do 3/1 twill and others do 1/3 twill, one of those interlacements can form a pattern motif on a background of threads doing the other interlacement. Compare the drafts shown below. The 16-shaft draft shows groups of 4 warp/4 weft threads forming a diamond design (3/1 twill) on a background of threads doing 1/3 twill. The 4-shaft draft shows a typical 4-shaft rosepath twill. 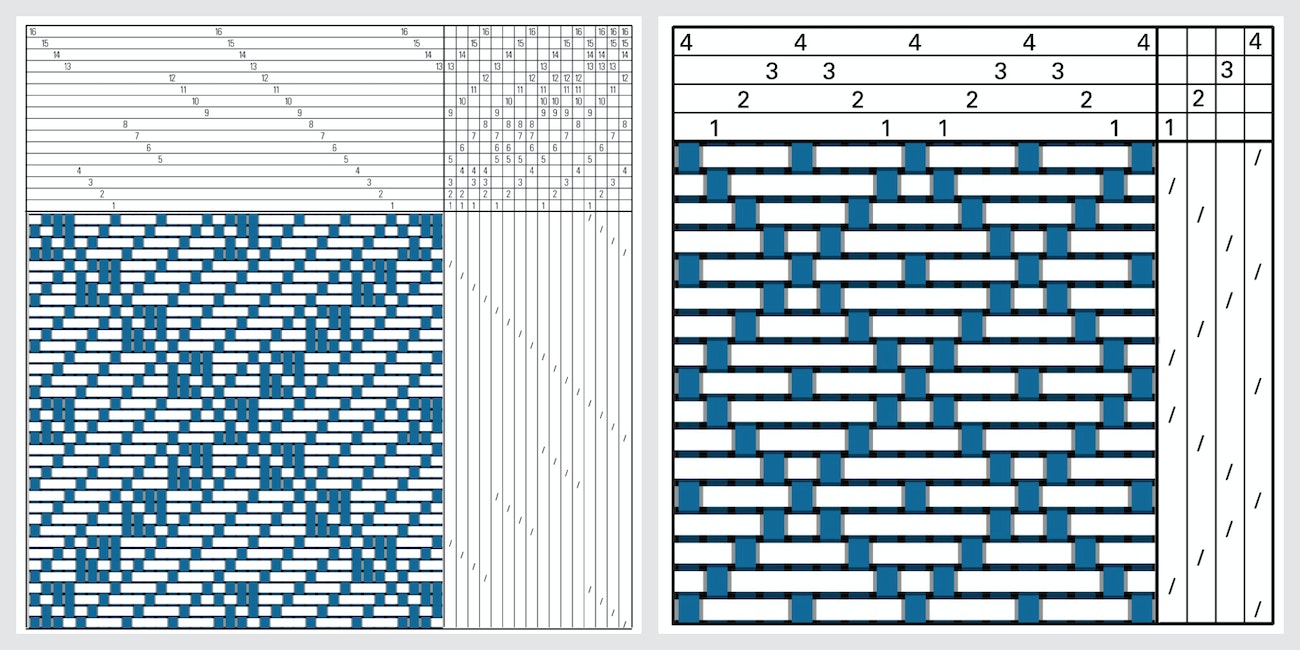 The 16-shaft draft on the left shows both 3/1 and 1/3 twills on one side of the cloth, The 4-shaft rosepath twill on the right shows only a 3/1 twill although the reverse of that fabric would be a 1/3 twill.

Overshot is a block weave in which groups of warp ends are left down so a pattern weft floats over them (a block weaving pattern), and groups of ends are raised so a pattern weft floats under them (background). A ground weft weaves a plain-weave cloth. The interlacement in an overshot draft is not a twill at all. Twills are one warp/one weft structures with a ratio of float over to float under (over two under two, over 1 under 3, etc.) that progresses along a diagonal. This isn’t true of overshot, although overshot blocks can progress along a diagonal.

The only way you could think of twills (such as rosepath) as block weaves is if you consider one thread equal to one block (warp float equals pattern, weft float equals background or vice versa). If you thought of it that way, you would have to have another name for weave structures in which groups of threads do the pattern vs background roles. I like to think of blocks as sets: All threads that always weave pattern or background together are one set (rather than one block). We have inherited the title “block” for these weaves, however. Our vocabulary is a hodgepodge of terms that come from all over the world that we continually work to standardize.