When weaving a Shaker-style twisted rug, how do you join a new weft to an old—without making a lump?

I am writing because I decided to make the twisted-weft rug that was in Handwoven last year, and I am stuck on something that has me at a stop. I’m not sure how to join the two ends of the weft when I need to start a new piece. The weft is eight strands of mop cotton that I’m twisting as I weave. Do you have any suggestions on how to join these two pieces so that it looks nice and still has the twist? 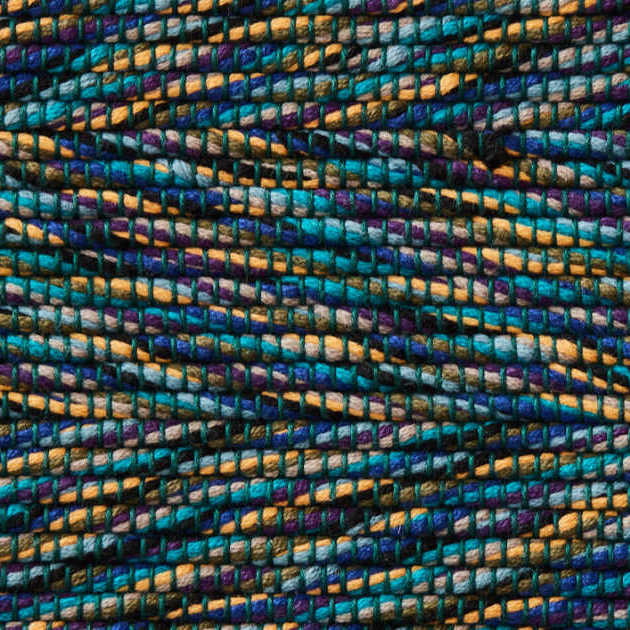 The article you refer to is “Twisted-Weft Rug” by Sara Bixler, January/February 2019, pages 60–61. The eight strands of mop cotton weft, each a different color, are twisted first in one direction with an “S” twist for a series of picks, then in the opposite direction with a “Z” twist for a series of picks. The twisted-weft threads make a twill-like pattern in the rug.

Usually, when starting a new thick weft, you remove some of the plies from the ends of the old one and some from the ends of the new one (or in some other way taper them both) so that their combined thickness when they are overlapped in the shed is the same as for a single thread.

I checked with Sara Bixler, and she follows a similar process for the eight strands of mop cotton: Cut the eight threads of the old weft so that each one is shorter than the one before it. Then cut the eight strands of the new weft in the same way, only in the opposite color order. Place the two weft tails on top of each other so that the ends of each color meet and twist them together gently in the same direction the weft had been twisted when it ran out. Weave at least one pick with that twist to secure the splice. Then continue weaving, twisting the shuttle in whatever direction the design requires.

Sara did say that the Shakers traditionally added a braided-rag edge around all four sides of a rug. If you did that, you could let all weft tails hang out at the edges, and the trim would hide them. (This was not her favorite solution!)